Stock markets up trend resumed on expectation that US president Donald Trump would gradually implement the pro-growth policies he promised. Sentiment was also lifted by encouraging earnings reports. As soon as he has been sworn in, Trump signed a series of executive orders with the latest one on Keystone and Dakota pipelines. The action aims at facilitating TransCanada to build the Keystone XL pipeline and for Energy Transfer Partners to build the final uncompleted portion of the Dakota Access pipeline. A report by McClatchy revealed that the President and his team has compiled a list of about 50 infrastructure projects nationwide, totaling at least USD 137.5b. According to the preliminary list provided to the National Governor’s Association, the projects include to renewal of the country’s highways, airports, dams and bridges. A similar list was revealed by the Star. The market was thrilled by the news with DJIA’s material sector index gaining over 2%.

Some economists attributed the breakdown in correlation between treasury yield and Dollar to concerns over Trump’s protectionism. Some pointed to the US-Japan trade conflicts back in 1990s when Dollar was weak despite higher US interest rates. But at this point, it’s still too early to confirm the divergence in yield and Dollar. Technically, the benchmark 10 year yield is held below key near term resistance at 2.621. Dollar index is holding above key structural support at 99.43. Technically, both can be seen as staying in consolidative mode. As stocks are gathering bullish momentum, the picture will likely be cleared soon.

GBP/USD reaches as high as 1.2662 so far as rebound from 1.1986 extends. Intraday bias stays on the upside for 1.2774 resistance. Again, rise from 1.1986 is seen as the third leg of the consolidation pattern from 1.1946. We’d expect strong resistance at 1.2774 to limit upside and bring down trend resumption eventually. On the downside, below 1.2414 minor support will turn bias to the downside for retesting 1.1946 low. 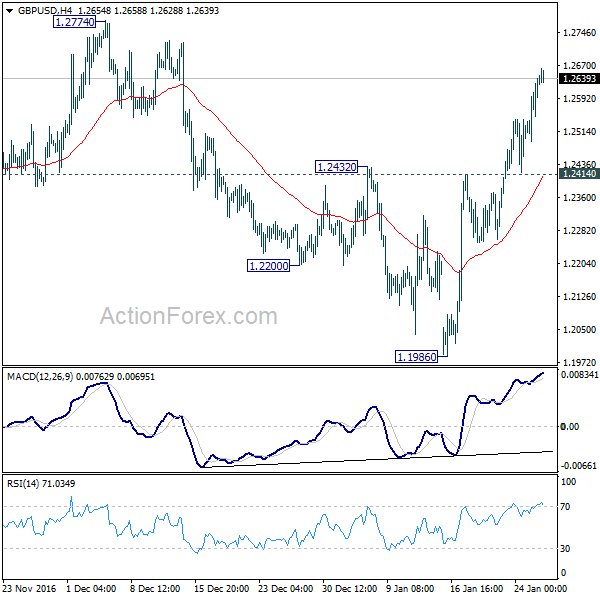 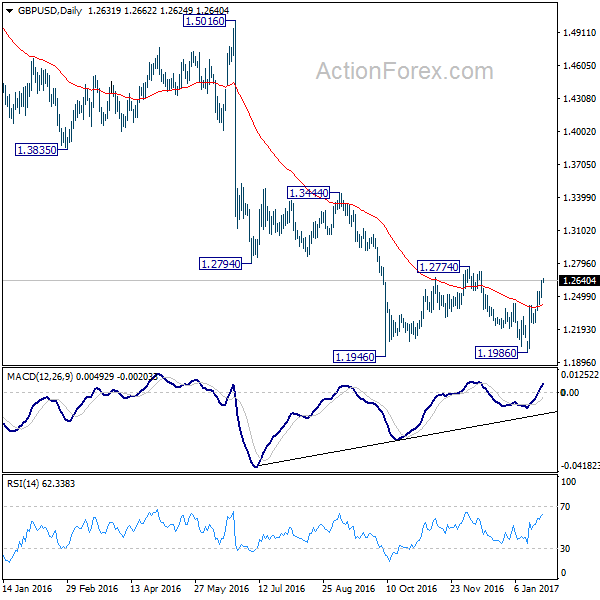