Dollar is trying to recover today but remains the weakest major currency as markets turn their focus to FOMC rate decision today. The greenback has been under much selling pressure since the start of drama of US president Donald Trump’s executive order on immigration ban. And more certainties are added after Trump called China and Japan playing their money markets. Also, his trade adviser Peter Navarro complained that the Euro was "grossly undervalued". Markets’ enthusiasm over Trump’s expansive policies diminished much this week and that can clearly be seen in the sharp pull back in stocks. DJIA ended down -107.04 pts or -0.54% at 19865.09, moving further away from 20000 handle. 10 year yield also lost 0.032 to close at 2.451. Dollar index is back below 100 handle, trading at around 99.8 at the time of writing.

Trump criticized that "you look at what China’s doing, you look at what Japan has done over the years. They play the money market, they play the devaluation market and we sit there like a bunch of dummies." Japan’s chief cabinet secretary, Yoshihide Suga, said Trump’s criticism "completely misses the mark" and pledged that the central will continue to respond to "one-sided" moves in the markets. BoJ governor Haruhiko Kuroda sad earlier this week that nation’s monetary policy "is not targeting exchange rates," but "is aimed at stabilizing prices and attaining a 2 percent inflation goal as soon as possible."

At the interview with the Financial Times, Peter Navarro, head of Trump’s new National Trade Council, indicated that the euro has been "grossly undervalued" and Germany has been a big beneficiary of it. He blamed that Germany has been manipulating the single currency, using it as "implicit Deutsche Mark", to "exploit" the US and its EU partners. He also blamed that Germany was the main obstacle to a trade deal between the US and European bloc. German Chancellor Angel Merkel responded emphasized that Germany "has always called for the European Central Bank to pursue an independent policy" and the country "will not influence the behavior of the ECB". And thus, she cannot and do not want to change the situation as it is."

The focus today is on the FOMC meeting. It is widely expected that no change would be on the monetary policy. Yet, the market should pay attention to the accompanying statement. We expect policymakers to highlight the improvement in the employment market, noting that it’s close to full employment. The questions remain on whether Fed would realize its projection of three rate hikes this year. Fed fund futures are pricing in less than 70% chance of a hike by June, slightly lower than last week.

AUD/USD’s consolidation from 0.7608 is still in progress and intraday bias remains neutral first. Further rise could be seen with 0.7448 support intact. On the upside, above 0.7608 will extend the rebound form 0.7158. But we’d expect strong resistance from 0.7777/7833 resistance zone to bring near term reversal. On the downside, break of 0.7448 support will indicate that rebound from 0.7158 has completed. That will turn bias to the downside for 0.7144 key support level.

In the bigger picture, AUD/USD is staying inside long term falling channel and it’s likely that the down trend from 1.1079 is still in progress. Break of 0.6826 low will confirm this bearish case. We’ll be looking for bottoming sign again as it approaches 0.6008 key support level. Meanwhile, sustained break of 0.7833 resistance will be a strong sign of medium term reversal. 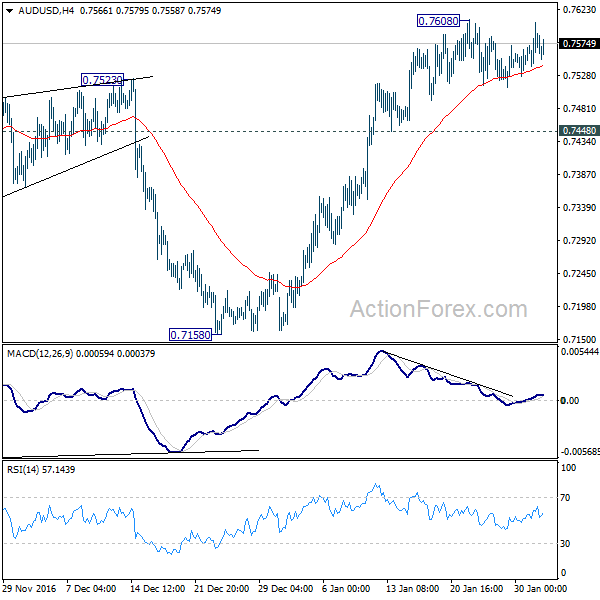 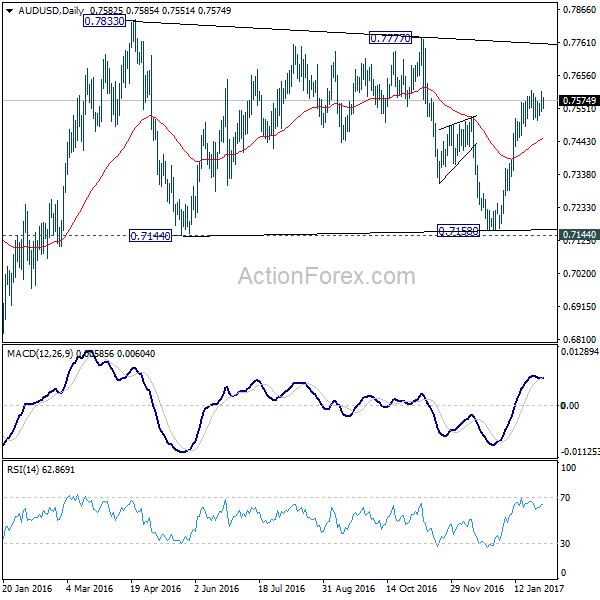