Sterling trades notably high against Dollar and Yen today on more optimism over Brexit. GBP/USD reaches as high as 1.3942 so far and looks set to take out 1.3835 key resistance decisively. That would carry long term bullish implications. But for now, Euro and Swiss Franc are trading as the strongest ones for today. There is no change in Dollar’s fate for the moment as its rebound again lacks follow through momentum. The greenback is weighed down by talks of global diversifications away from Dollar assets, including China and others. And Euro is an important destination of the funds.

US initial jobless claims dropped -41k to 220k in the week ended January 13, well below expectation of 251k. That’s also the lowest level in 45 years since 1973. Continuing claims rose 76k to 1.95m in the week ended January 6. Housing starts dropped to 1.19m annualized rate in December while building permits was unchanged at 1.30m. Philly Fed survey dropped to 22.2 in January.

The latest leg in the Pound’s rally is triggered by the approval of the Brexit bill in the House of Commons. The bill aims to incorporate European Law into British Law to ensure a smooth transition. The bill was approved by 324 to 295 votes. The bill will now be passed to the House of Lords. While debates there could be fierce, it’s still highly likely for the bill to get enough support.

Improving prospect of a post-Brexit trade deal is expected to boost investments and hiring in UK. But at this point, it’s generally believed that BoE is not ready to raise interest rates again. According to a Reuters poll, all 75 economists surveyed expect BoE to keep the bank rate unchanged at 0.50% at the meeting on February 8. The next move is generally expected to happen in Q4.

SPD to vote on coalition this Sunday

In Eurozone, all eyes will be on Germany this weekend. The Social Democrats (SPD) are expected to vote on coalition with Chancellor Angela Merkel’s CDU/CSU this Sunday. For now, opinions among SPD members appear to be split, with two regional branches already said they do not back the grand coalition.

SPD leader Martin Schulz urged the members in a facebook live broadcast that "we live in a world of dictators who make the world’s breath pause with their crazed ideas … And we have the chance to make Europe a bit more social, peaceful and just." But there is political reality for SPD to consider. According to Forsa poll, support for SPD slipped to 18%, and that’s something the party have to face.

Australian job growth remained strong with 34.7k expansion in December. That’s more than double of market expectation of 15.2k. That’s the 15th straight month of expansion, the longest streak since 1993. And the more encouraging part is that full time jobs rose by 322k since December 2016, making up the majority of the 393k growth. Unemployment rate rose to 5.5% but that’s due to a jump in participation rate at 65.7%. For the moment, markets are only pricing in 50/50 chance of an RBA rate hike by August. Also from Australia, consumer inflation expectation rose 3.7% in January.

GBP/USD’s rally is trying to regain momentum above 1.3835 key resistance level. Intraday bias is mildly on the upside at this point. Sustained trading above 1.3835 will carry larger bullish implication and should target long term fibonacci level at 1.5466 next. On the downside, though, break of 1.3741 minor support will indicate rejection from 1.3835 and turn bias to the downside for 1.3457. 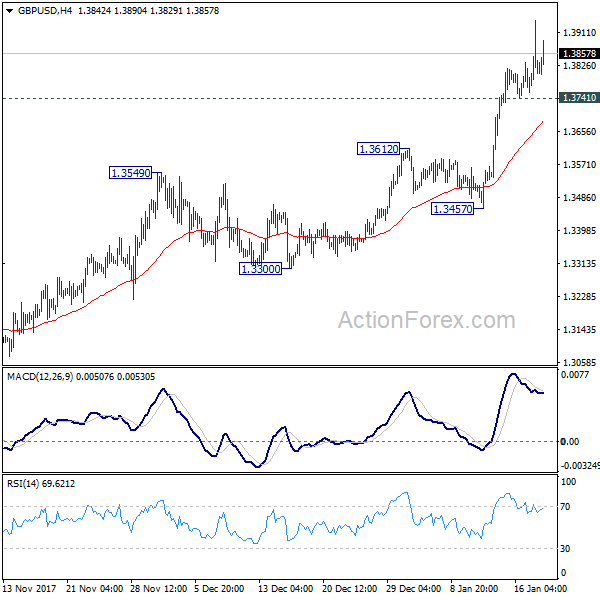 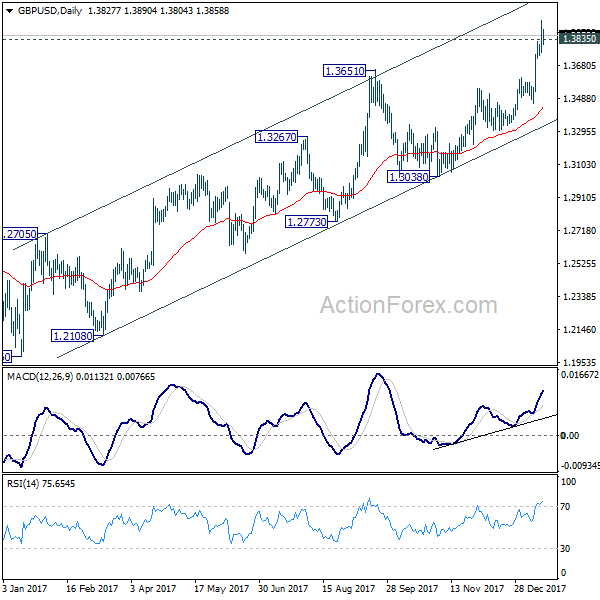