Sterling recovers mildly today but remains the weakest major currency for the week. Prime minister Theresa May’s speech on Brexit is the main focus and could trigger more volatility in the pound. It’s reported that May will reject the idea of "partial" EU member in return for a full control of UK’s border. The trade relationship that May would like to push through is unknown. But EU leaders have already made it clear that UK cannot "cherry pick" access to the single markets. The pound could stay under pressure after May’s speech. Technically, Sterling is staying bearish against Dollar, Euro and Yen in near term and we’d expect more downside ahead.

Theresa May is scheduled to speak before audience at Lancaster House, Westminster, including ambassadors from across the world, today. As the Guardian noted, May is expected to say in her speech that "we seek a new and equal partnership – between an independent, self-governing, global Britain and our friends and allies in the EU. Not partial membership of the European Union, associate membership of the European Union or anything that leaves us half-in, half-out… We do not seek to adopt a model already enjoyed by other countries. We do not seek to hold on to bits of membership as we leave. The United Kingdom is leaving the European Union. My job is to get the right deal for Britain as we do".

Separately, BoE governor Mark Carney talked down recent moves in the exchange rate and said that "value of the pound will go up and down." He acknowledged "signs of continued solid consumer momentum domestically and a stronger growth outlook globally", noting that "the tension between consumer strength on the one hand and the more pessimistic expectations of markets on the other will be resolved". However, firstly, he still expected growth to "remain below past averages for the next few years". And, "one corroborating indicator of this potential deceleration is that the UK expansion is increasingly consumption-led."

On the data front, Australia home loans rose 0.9% in November. Japan industrial production was finalized at 1.5% mom in November. UK will release CPI and PPI. Eurozone will release ZEW economic sentiment. US will release Empire state manufacturing later in US session. 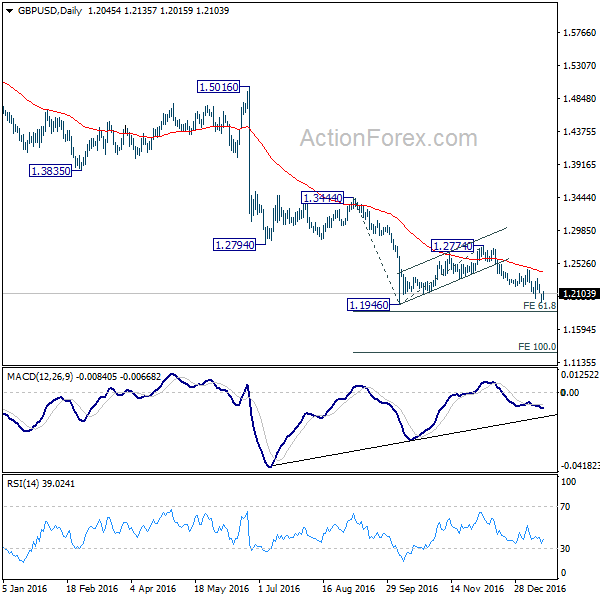