The financial markets don’t always hate uncertainties. Sometimes, they embrace it. US President Donald Trump backed down from his initial tough stance on Syria, and it’s now unsure when he will order firing of missiles over it. European equities cheered the newly created uncertainty with DAX turning initial loss into gain and is currently trading up 0.55%. CAC is up 0.23% while FTSE is flat. US futures now also point to higher open.

In the currency markets, Dollar welcomed Trump’s tweet and surges against Euro, Swiss Franc and Yen. The greenback, nonetheless, is staying in tight range against Sterling, Canadian an Australia Dollar. One the other hand, Euro trader are clearly dissatisfied that ECB minutes provide no news. ECB Governing Council member Ewald Nowotny might have prompted some speculation of ECB rate hike earlier this week. But the minutes put everything back in place with its cautious tone that gives no hint of further action regarding the forward guidance or the asset purchase program. The ECB minutes are all very balanced and clear. But traders just don’t like it and send the Euro sharply lower.

Trump backed down from his tough Syria stance

In his usual morning tweet, Trump said “Never said when an attack on Syria would take place. Could be very soon or not so soon at all!” And just yesterday, he tweeted “Russia vows to shoot down any and all missiles fired at Syria. Get ready Russia, because they will be coming, nice and new and ‘smart!'”. So, Trump changed is stance that from the missile are coming, to it’s uncertain when, but they’re coming.

Separately, Russia also tried to calm down the situation as Frants Klintsevich, a senator who’s a member of the upper house’s defense and security committee said warned that “if these strikes start, it could end very tragically and it’s impossible to predict the outcome.”

Euro drops sharply as markets are disappointed that ECB account of March monetary policy meeting delivers no hawkishness at all. Regarding inflation, ECB noted that “measures of underlying inflation remained subdued and had yet to show convincing signs of a sustained upward trend.” And, “ample degree of monetary policy accommodation remained necessary to accompany the economic expansion and for price pressures to continue to build up”. Also, “remaining uncertainties and muted underlying inflation pressures called for caution and underlined the need to maintain the prevailing policy posture of prudence, patience and persistence.”

The removal of easing bias on regarding the asset purchase program from the forward guidance was justified because “economic expansion had become more robust and scenarios of large negative economic surprises, leading to renewed deflationary risks, had become less likely.” Still, the Governing Council members emphasized the “prudence, patience and persistence remained warranted and the key elements of the Governing Council’s forward guidance on policy rates and the APP needed to be confirmed, including the open-endedness of the APP.

Regarding Euro’s exchange rate, ECB noted that “recent movements in the euro exchange rate seemed to relate more to the relative monetary policy shocks, including communication, and less to improvements in the macroeconomic outlook.” And, “this suggested that the exchange rate appreciation could be expected to have a more negative impact on inflation.”

ECB also warned that “there was widespread concern that the risk of trade conflicts, which could be expected to have an adverse impact on activity for all countries involved, had increased.” ECB added,”it was also cautioned that negative confidence effects could arise.”

Germany Federal Ministry for Economic Affairs and Energy released a monthly report today. It noted that the upswing of the German economy continues with pace moderated slightly. The global economic environment continues to be favorable. However, there are increased risks due to trade conflicts. The up trends in new orders have weakened while consumer demand has recently been less dynamic. Nonetheless, with increasing challenge for hiring, unemployment and underemployment continue to decline.

USD/CHF rebounds strongly today and focus is back on 0.9648 resistance. Break there will firstly resume whole rebound from 0.9186. Secondly, sustained trading above 0.9626 key fibonacci resistance will will be another evidence of larger reversal. In that case, further rally should be seen back to next fibonacci level at 0.9900. On the downside, though, break of 0.9533 minor support should be another indication of rejection by 0.9626. Further break of 0.9432 will turn near term outlook bearish for retesting 0.9186 low. 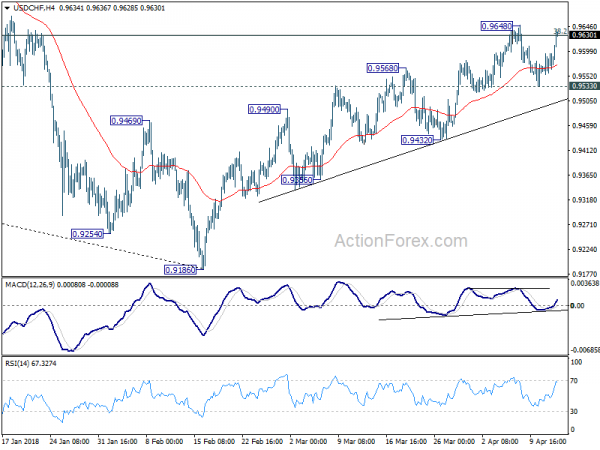 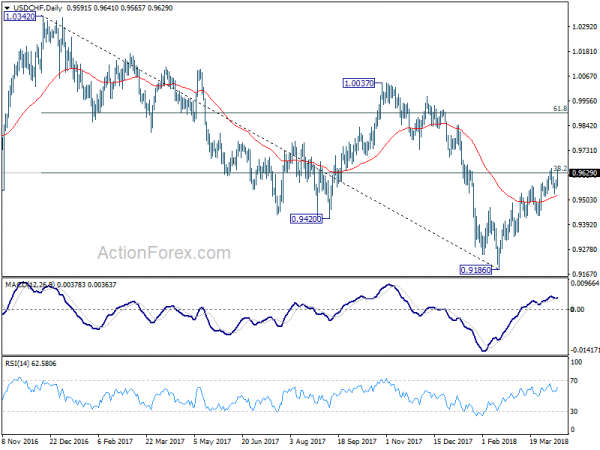