Dollar jumps today on safe haven flows on report of "probable terrorist attack" in Germany. In addition, markets were also nervous on the Russia/Turkey issue after Russian ambassador to Turkey was fatally shot. Meanwhile, the greenback is supported by Fed chair Janet Yellen’s upbeat comments on the employment conditions. The dollar index surges to as high as 103.65 so far, breaking near term resistance at 103.56 to resume recent up trend. The index is on course to medium term projection target at 105.19. In the currency markets, Sterling is so far the weakest one for the week, followed closely by commodity currencies and Euro. Yen, despite today’s weakness, is supported mildly by risk aversion with the Swiss Franc.

Yesterday, Fed Chair Janet Yellen’s keynote speech at the University of Baltimore did lift yields a bit. While not offering hints for the monetary policy outlook, Yellen was upbeat over the employment conditions. As she suggested that the US is at "the strongest job market in a decade" and that "there are also indications that wage growth is picking up". However, she also added that that productivity growth was disappointing.

BoJ offered a brighter view on the economy after keeping monetary policies unchanged. Interest rate was held at -0.1% and the asset purchase program was also kept unchanged under the yield curve control framework. The vote on YCC was by 7-2 vote with policymakers Sato and Kiuchi opposing. The central bank noted in the statement that "Japan’s economy continues to recover moderately as a trend", with consumption "moving on a firm note".Though, CPI is expected to be "slightly negative or about 0 percent for the time being. BoJ also noted that risks to the outlook including development in "emerging and commodity exporting economies", particularly China; developments in US; and Brexit. Separately, the Japanese government projected the real GDP to grow 1.5% in the year starting next April, revised up from prior projection of 1.2%. Nominal GDP growth is projected to be 2.5%, up from prior projection of 2.2%. CPI is forecast to be at 1.1%, down from prior estimate of 1.4%. Meanwhile, the initial budget for next fiscal year is JPY 97.5T, a mild 0.8% from the current year.

RBA minutes for the December meeting warned of the high levels of household debt due to low interest rates. The central bank left its cash rate unchanged at 1.5% this month. As suggested in the minutes, "over recent years, the board had sought to balance the benefits of lower interest rates in supporting growth and achieving the inflation target with the potential risks to household balance sheets…Members recognized that this balance would need to be kept under review". The central bank remained cautious over the job market, reiterating that there was "considerable uncertainty" about the employment situation and "there was expected to be excess capacity in the labour market for some time, which was consistent with further indications of subdued labour cost pressures". More in RBA Minutes Unveils Concerns Over Elevated Household Debts.

EUR/USD’s fall resumes after brief consolidation and intraday bias is turned back to the downside. Current decline is part of the larger down trend and should target 100% projection of 1.1298 to 1.0518 from 1.0872 at 1.0092, which is close to parity. On the upside, above 1.0479 minor resistance will turn bias neutral again for consolidations. 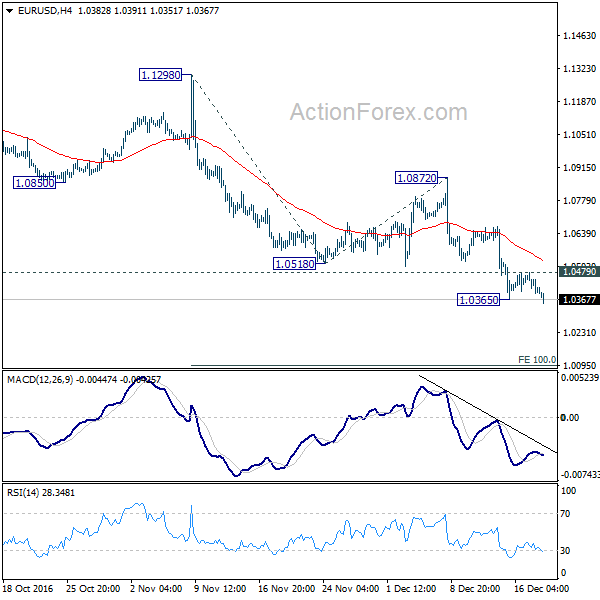 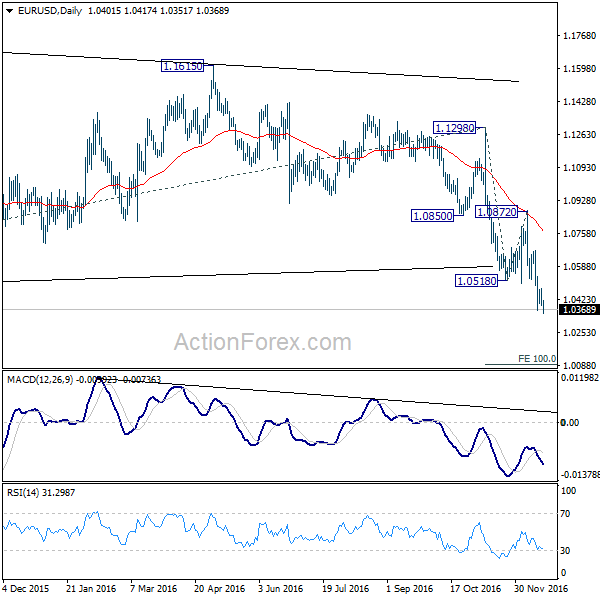