Dollar surged broadly as boosted by rally in US Treasury yield. 10 year yield hit as high as 3.90 overnight, the highest level since 2011, before settling at 3.08. While the greenback is strong, it’s struggling to break through near term resistance levels decisively against Euro and Sterling for now. For now, EUR/USD is still holding above 1.1822 while GBP/USD is holding above 1.3459. Meanwhile, Swiss Franc somehow stole some spotlights from Dollar as EUR/CHF dived through 1.1864 support to as low as 1.1825, after failing 1.2 handle again earlier. Developments in yields and Dollar will remain the major focus for today.

San Francisco Fed President John Williams said that the r-star neutral rate remains at 2.5% despite strong growth. He noted that “some economists and central bankers have pointed to signs that the fortunes of r-star are set to rise.” However, he didn’t see “convincing evidence” yet.

Fed has been describing monetary policy as “accommodative” for years. With federal funds rates just a few hikes from 2.5%, William saw the need to “revisit” the language. But “that would be a committee decision about how to best describe the committee’s view around where monetary policy is positioned and where we see it going.”

But it’s generally believed that the contraction is temporary. In particular, a relatively weaker Yen at 100 against Dollar and global recovery, export led Japanese economy remains on solid footing for expansion.

Also from Japan, industrial production was revised up to 1.4% mom in March, from first estimate of 1.2% mom.

North Korea threatened to cancel Trump-Kim summit after they’re infuriated by comments from Trump’s national security adviser John Bolton that North Korea could follow a Libyan model of nuclear disarmament. The meeting is scheduled to be on June 12.

North Korea’s vice-foreign minister Kim Kye-gwan used strong words in a statement carried by the state news agency KCNA. He condemned that Bolton’s suggestion was “not an expression of intention to address the issue through dialogue”. And, “it is essentially a manifestation of awfully sinister move to impose on our dignified state the destiny of Libya or Iraq which had been collapsed due to yielding the whole of their countries to big powers.”

Kim went further and warned that if the US “corners us and unilaterally demands we give up nuclear weapons we will no longer have an interest in talks and will have to reconsider whether we will accept the upcoming DPRK-US summit”. And, “if President Trump follows in the footsteps of his predecessors, he will be recorded as more tragic and unsuccessful president than his predecessors, far from his initial ambition to make unprecedented success.”

Australia wage price index rose less than expected by 0.5% qoq in Q1. Westpac consumer confidence dropped -0.6% in May. Eurozone and Germany CPI final will be the main feature in European session. US will release housing starts and building permits, industrial production and capacity utilization later in the day. Canada manufacturing sales will also be featured.

Despite breaching 1.1822 support, there is no follow through selling seen in EUR/USD yet. Nonetheless, intraday bias remains on the downside side. The decline from 1.2555 is seen as resuming for 1.1708 medium term fibonacci level next. Break will target 1.1553 support. And, on the upside, break of 1.1995 resistance is needed to indicate short term bottoming. Otherwise, outlook will remain bearish in case of recovery. 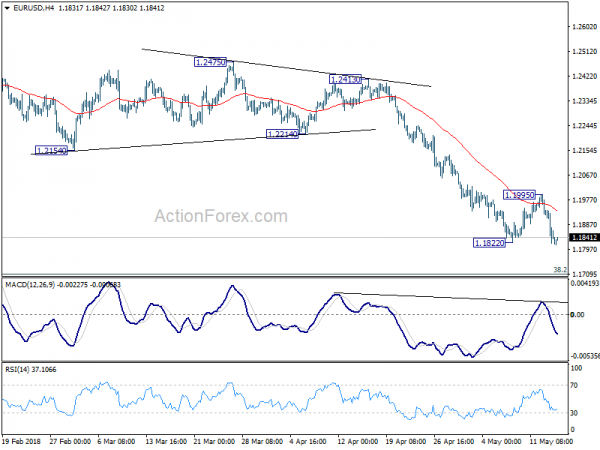 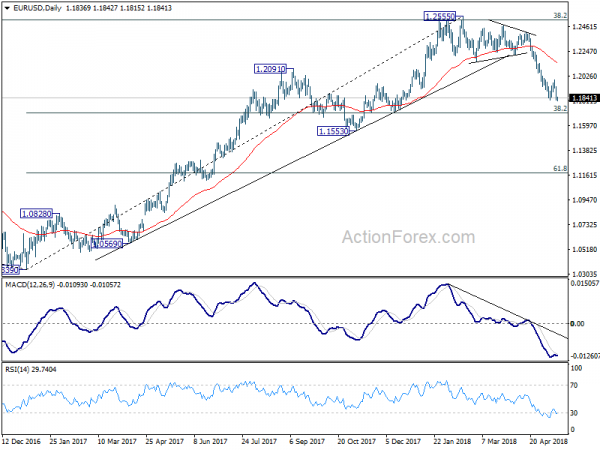