US stocks soared to new record high last week on resurgence of talk of president Donald Trump’s expansive policies. In particular, bulls regained control after Trump said he would announce "phenomenal" tax reforms within two or three weeks. DJIA closed the week up 197.9 pts, or 0.99% at 20269.37. S&P 500 gained 18.7 pts or 0.81% for the week to close at 2316.10. NASDAQ rose 67.4 pts or 1.19% to close at 5734.13. All three major indices closed at record highs. The developments helped lift treasury yield from intra-week selloff. 10 year yield closed at 2.409 after dipping to 2.325, comparing to prior week’s close at 2.491. Dollar was given a boost and ended as the second strongest major currency, next to Sterling. The Dollar index closed at 100.71, up from prior week’s close at 99.73. Fed chair Janet Yellen’s testimony to Congress will be a major focus this week. But Trump’s tweets and any economy-related announcements will be the things that move markets.

Dollar Index Could Have Bottomed at 99.23

With the dollar index depended key support zone. There is growing prospect of a near term reversal. Despite dipping to 99.23 earlier this month, the index quickly recovered back above 99.43 support. Now, firstly, daily MACD has crossed above signal line already, acting as a early sign of bottoming. Secondly, the structure of the fall from 103.82 to 99.23 is consistent with the view that it’s a correction. Immediate focus this week is on 101.02 resistance. Decisive break there will confirm that the correction has completed and turn outlook bullish for a test on 103.82 high. Rejection from 101.02 would bring another fall, possibly to 61.8% retracement of 95.88 to 103.82 at 98.91.

Dollar’s near term fate will also depend on developments in treasury yields. Or at least, should be in sync with benchmark yields to confirm underlying momentum. 10 year yield defended 55 day EMA last week and recovered. So far, structure of the price actions from 2.621 is consistent with the view that it’s a consolidation pattern. More upside is in favor this week in TNX. But the real obstacle is in 2.555 resistance. Decisive break there will very likely bring resumption of up trend from 1.336. Though, rejection from 2.555 will extend the consolidation from 2.621 with another falling leg.

Meanwhile, there is an important factor that would limit the strength in yield and dollar, or even reverse last week’s move. DJIA did extended its record run. However, firstly, it’s now close to long term projection level at 61.8% projection of 10404.49 to 18351.36 from 15450.56 at 20361.72. Secondly, it’s also close to the long term upper channel line. Thirdly, weekly RSI is clearly in overbought region. At this point, we don’t seen any ground for powering through fibonacci and channel resistance. Hence, while we’re staying bullish in stocks, we’ll be very cautious in the next two weeks. And, a pull back in stocks will most likely pressure yields and Dollar again.

To conclude, at this point, we’re not seeing any clear near term direction in the forex markets yet. While there are factors supporting Dollar to regain control, there are counter-factors too. We’ll keep our hands off for another week. Probably, Fed Chair Janet Yellen and US president Donald Trump would clear up the uncertainties and set the tone for the rest of Q1.

EUR/USD’s decline last week suggests that the corrective rise from 1.0339 has completed at 1.0828 already. Initial bias stays on the downside this week for 1.0339 low. Decisive break there will confirm resumption of medium term down trend. On the upside, however, above 1.0713 minor resistance will delay the bearish case and turn bias neutral first. 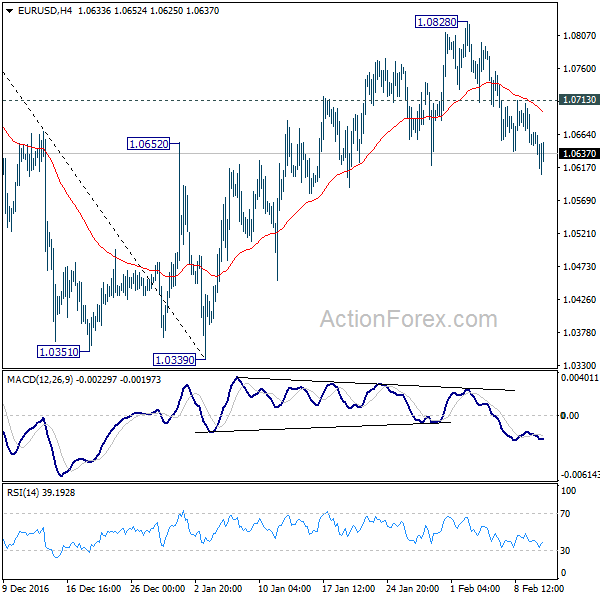 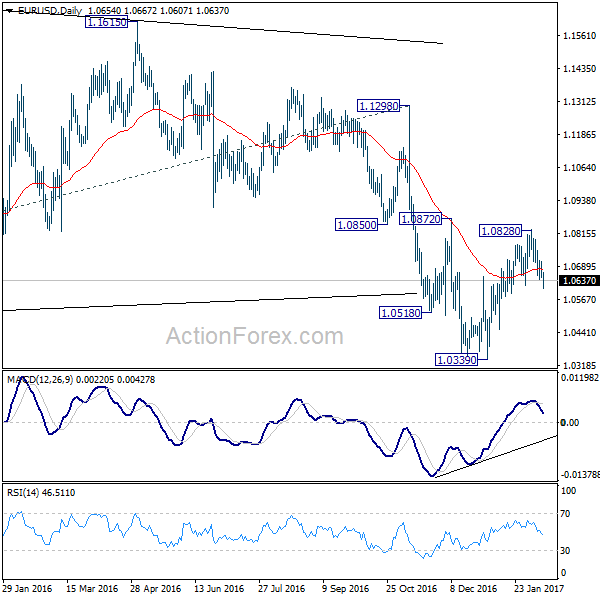 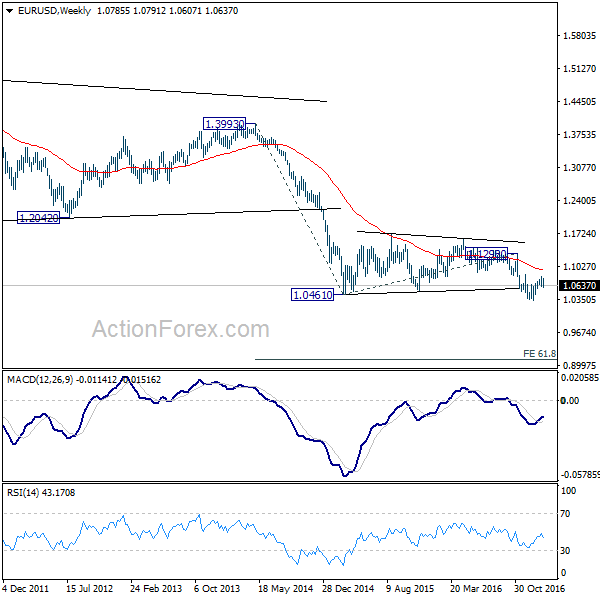 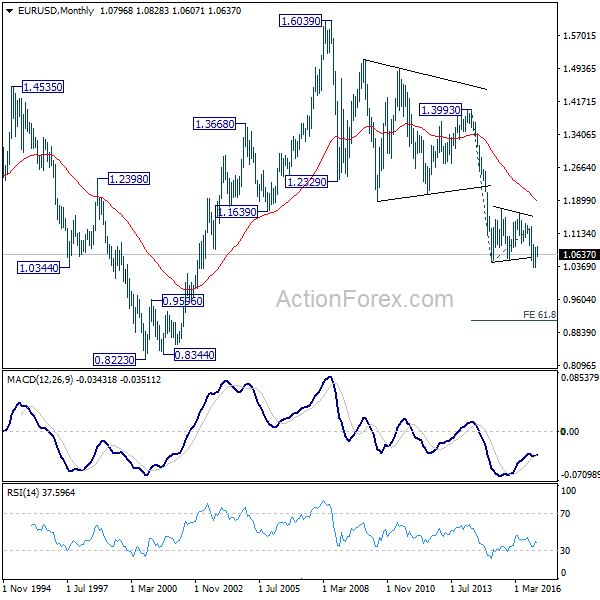