Euro surged broadly last week and led European majors higher on expectation that pro-EU centrist Emmanuel Macron will have an easy win in French presidential election this Sunday. Traders seemed to have ignored the news about hacking attack on Macron’s campaign. With 20 pt lead over EU-sceptic far-right Marine Le Pen, there should be enough safety margin for Macron. The focus is now on the reactions in that markets on the results during the initial part of next week. As Macron’s win should be well priced into the markets, there is prospect of a setback in Euro after the facts. However, judging from the strength in European indices, it’s believed that there is solid underlying optimism in the European economy. And, strategy could indeed be "buy-pull-back" rather that "sell-on-news".

French CAC 40 surged strongly to close at 5432.40 last week, up 203.85 pts for the week, or 3.9%, at the highest level in more than 9 years. The strength is even more impressive comparing e to the close at 5059.20 two Fridays ago, just before the first round of election. CAC is clearly staying in medium term up trend holding well above rising 55 day EMA. Momentum was also strong as seen in the upside acceleration in daily MACD. Overbought condition in daily RSI could limit upside potential in near term. But as long as 5261.73 support holds, the up trend is still in health state to extend higher.

German DAX also jumped to record high at 12716.89, up 281.1 pts, or 2.2%. Similar to CAC, it’s in healthy medium term up trend, staying solidly above rising 55 day EMA. Overbought condition in daily RSI could limit upside in near term. But overall, the in dice is expected to extend the record run ahead.

Against other major currencies, Euro’s strength is admittedly uncertain against Sterling as seen in EUR/GBP. EUR/USD‘s rise from 1.0339 are still viewed as a corrective move. However, the common currency has been solid against others and showed sign of further strength in crosses. 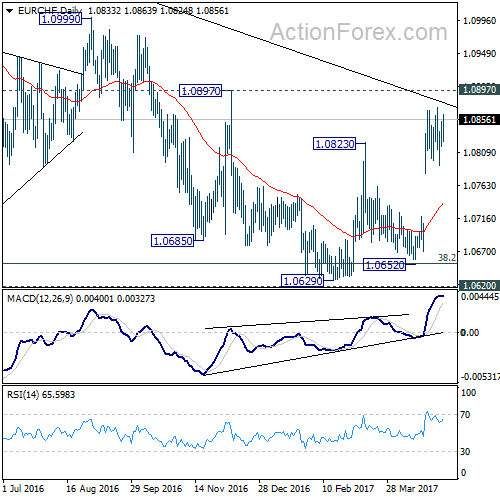 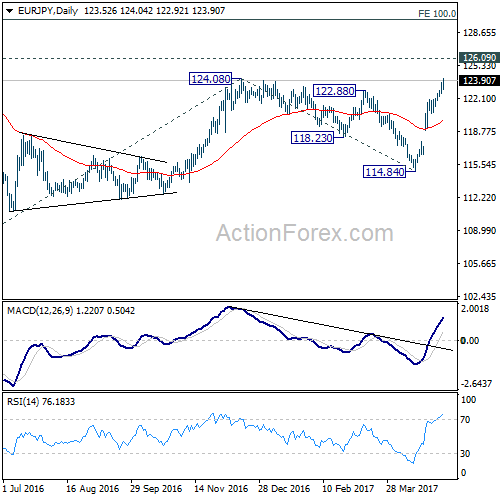 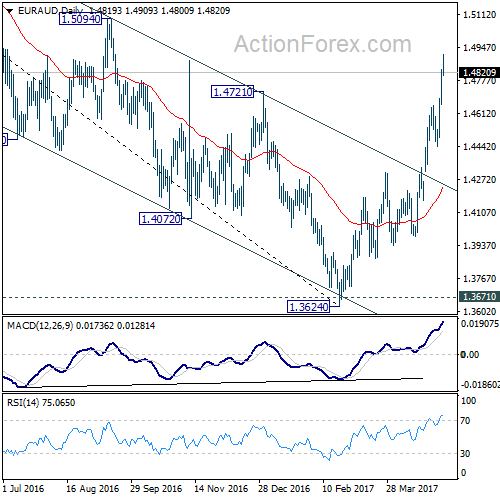 EUR/CAD’s strong rise last week should also confirm completion of the correction from 1.6103, with three waves down to 1.3782. Further rally should be seen through 1.5279 resistance to retest 1.6103 in medium term.

EUR/GBP stayed in right range last week and it’s uncertain whether the corrective move from 0.9304 is still heading lower. But the direction should be determined in the coming weeks. BoE will have another Super Thursday this. The pound was first lifted this year as one MPC member Kristin Forbes voted for a rate hike in BoE policy meeting. Sterling was then given another boost after Prime Minister called for a snap election on June 8, ahead of formal Brexit negotiation with EU. Market’s eyes will be on the updated economic projections to be published in the quarterly inflation report. In particular, any updated inflation forecasts would give the Pound a boost.

Dollar to shy from spotlight

Dollar is not having a very clear direction for now. Weakness in the dollar index was mainly due to Euro’s strength and that was some what countered by weakness in yen. Fed’s policy path for the year is clear. Markets are pricing in more than 70% chance of a rate hike in June. Fed is expected to raise interest rates a total of three times this year and then start shrinking the balance sheet. Last week’s FOMC statement and non-farm payroll provided little change to such expectation. The greenback would likely shy away from spotlight in near term.

Buy EUR/JPY and EUR/AUD on dips

USD/CAD surged to as high as 1.3793 last week but lost momentum ahead of 1.3838 fibonacci level. Choppy rise from 1.2460 is seen as a corrective move. We’d stay cautious on topping at around 1.3838. Focus will also be on 1.3534 resistance turned support. Break there will indicate reversal. 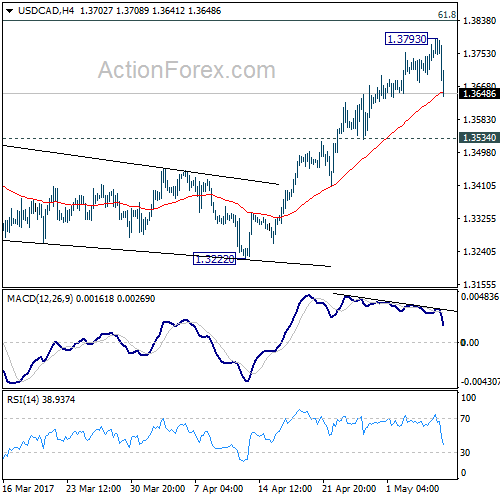 Initial bias in USD/CAD is neutral this week for consolidation first. In case of another rise, we’ll be cautious on topping at around 1.3838 fibonacci level. Meanwhile, consider bearish divergence condition in 4 hour MACD, break of 1.3534 support will argue that rise from 1.2968 is already completed. In such case, intraday bias will be turned back to the downside for 1.3222 support. 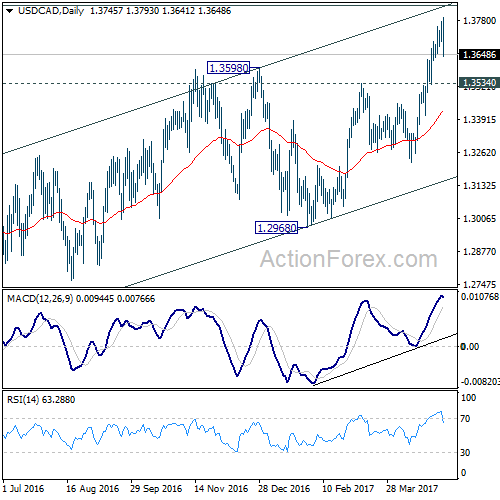 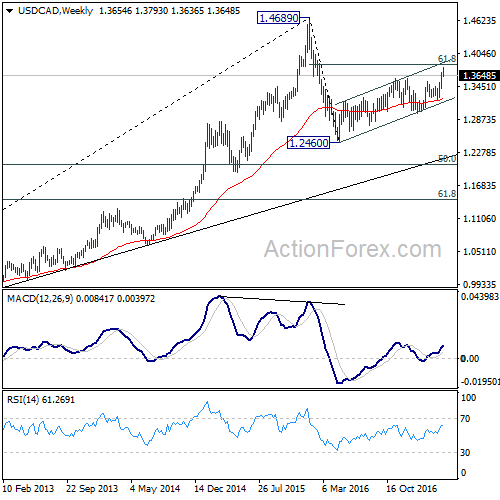 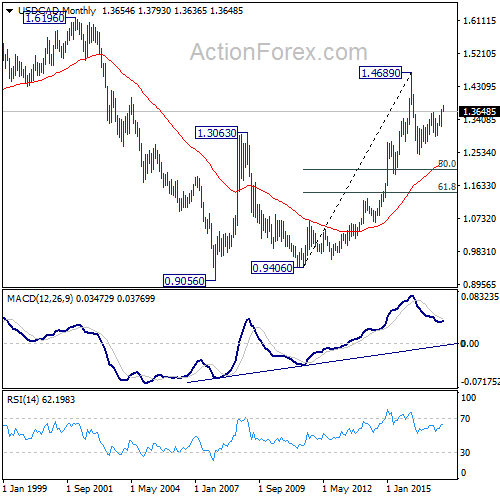