There are a few points to note regarding the polls. According to the voting intention poll on May 24-25, 43% would vote for Conservative, 38% for labour. Comparing to the same poll on May 18-19, support for Conservative dropped 1% while support for Labour rose 3%. That is, in a matter of one week, the lead has narrowed from 9% to 5%. The trend is indeed rather worrisome for Theresa May, considering that it was once over 20%.

But reversed after Manchester attack

However, situations have changed after the terrorist attack in Manchester. favourability of May jumped back to +1 while that of Corbyn dropped back to -16. May now had 17 pt favourability lead over Corbyn. The position of Conservative and Labour also reversed again with Conservative at -7, Labour at -8. It’s possible that the dip in form of Conservative was past the trough already. But it remains to be proven by more data.

But after all, the markets are now seriously looking at different possible outcomes of the election on June 8. A less than overwhelming win for Theresa May and Conservative, which now seems likely, will weaken May’s hand in Brexit negotiation with EU. But investors are also likely looking beyond the negotiation itself. A hung government will definitely make the transition period for UK very difficult. Also, a Labour led coalition, with Lib Dem, could mean cabinet reshuffle, and Brexit preparation work could be started over again. And, there were criticism that Labour’s manifesto means ramping up spending and debt. Brexit transition could also be much more chaotic.

FTSE at record on sterling weakness

In any case, Sterling will remain vulnerable in the coming two weeks due the uncertainties while FTSE 100 will follow negatively. FTSE’s pull back from March high at 7447.00 was contained at 7096.83 and the rise from 5499.50 then resumed. The strong support from 7093.56 maintained medium term bullishness Also, the break of long term channel resistance indicates upside acceleration. FTSE could now be heading to 100% projection of 4791.01 to 7112.74 from 5499.50 at 7831.24. Based on current correlations, this should be inspired by deeper selloff in Sterling.

A look at GBP/USD, EUR/GBP, GBP/JPY and GBP/CHF

Looking at the British Pound, GBP/USD’s sharp decline last week argues that rise from 1.2108 has completed at 1.3047 already. Deeper fall could be seen back to 1.2614 resistance turned support first. Break there should also confirm completion of whole corrective pattern from 1.1946. In that case, the larger down trend should resume through 1.1946 low. This will be the favored case as long as 1.2926 minor resistance holds. 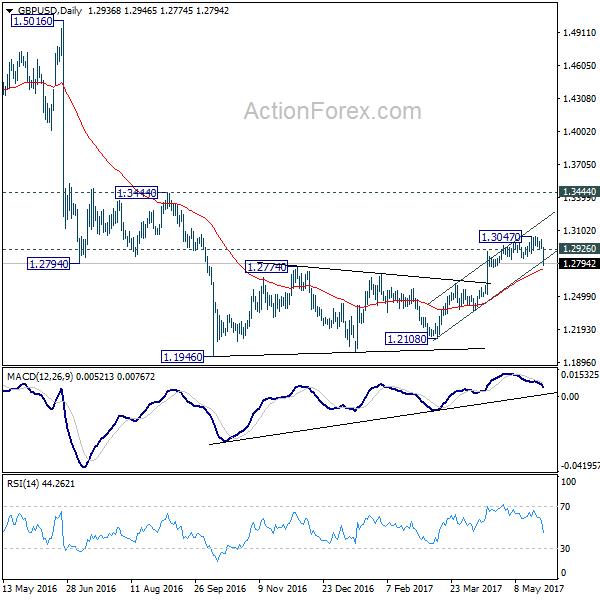 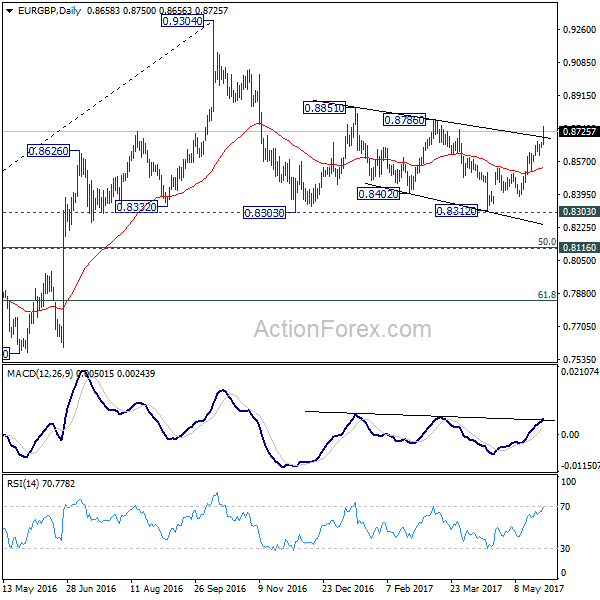 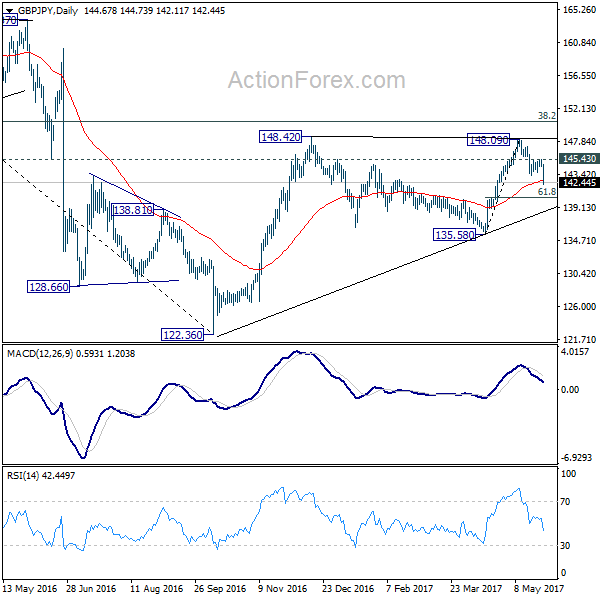 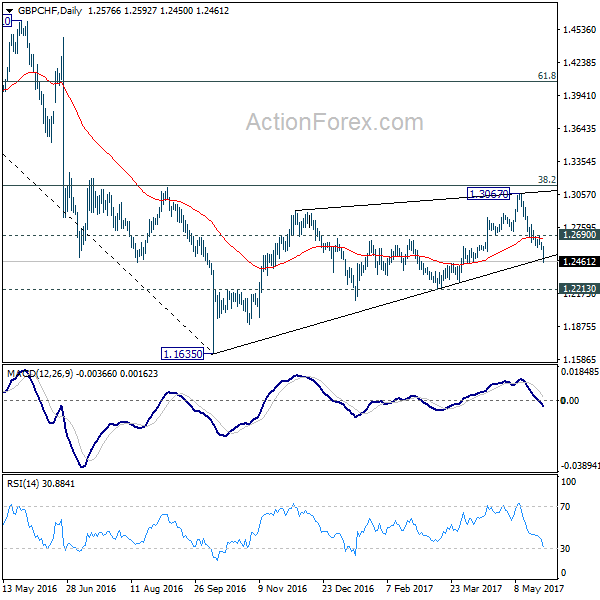 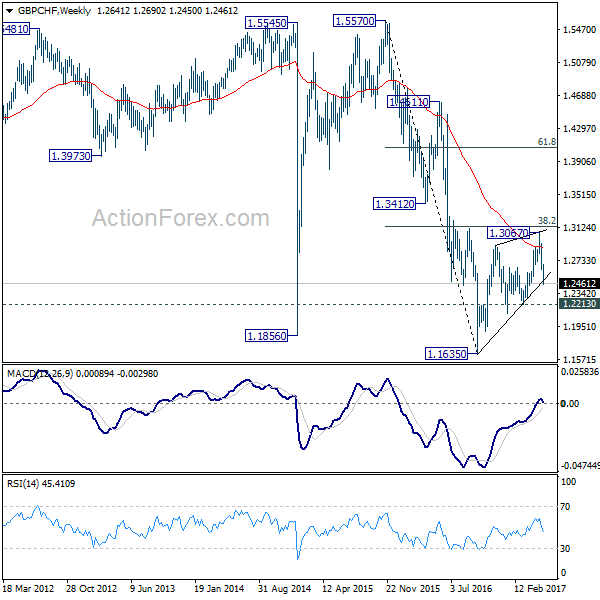 US data to be watched this week, Dollar index vulnerable

Looking ahead, US data will be back in focus in the coming week with ISM manufacturing and non-farm payroll featured. FOMC minutes released last week affirmed markets’ expectation of a June Fed hike, no doubt. Policy path in US is basically set, three hikes in total this year and shrinking of balance sheet to start towards the end. Some extra inspiration is needed for Dollar index to start a U-turn. Strength was seen in US equities last week with S&P 500 and NASDAQ making new record high. DOW wasn’t too far behind. But there was no reaction in treasury yield and Dollar.

Regarding trading strategy, we’d hold on to EUR/AUD long (bought at 1.4790, stop at 1.4850). The cross breached 1.5094 important resistance briefly but there was no follow through buying. Also, bearish divergence condition remained in 4 hour MACD and daily MACD has crossed below signal line. Risk of rejection from 1.5094 is increasing. Therefore, we will close out the EUR/AUD long at market this week to pocket the profits first.

We sold USD/CAD at open at 1.3510 last week. The pair dipped to 1.3387 but recovered since then. The anticipated strength in oil price didn’t happen. Instead, WTI tumbled after OPEC announced to extend production cut by 9 months as expected. Still, we’re holding on to the technical view that rise form 1.2968 is completed at 1.3793. And, there is chance of completion of whole medium term rise from 1.2460 too. Hence, we will hold on to USD/CAD short, and lower the stop to 1.3550.

For the week ahead, we’ll consider selling Sterling. But the decision on what to sell against is a bit difficult. Firstly, while we’re staying bearish in dollar index and bullish in EUR/USD, it should be noted that dollar index is close to 94.46 fibonacci level and EUR/USD close to 1.1298 resistance. Reversal is not expected but cannot be ruled out. EUR/CHF stays in near term consolidation from 1.0986 but that could end any time to resume rise from 1.0629. GBP/JPY is not that bearish comparing to other sterling pairs. We already have a CAD pair in USD/CAD already and Aussie is vulnerable to another decline. Hence, after all the nonsense, we’ll avoid adding position this week first and wait-and-see. And just keep USD/CAD short. 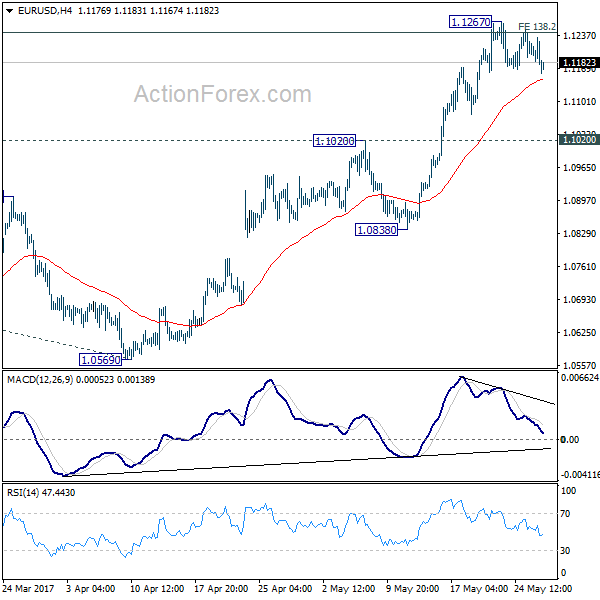 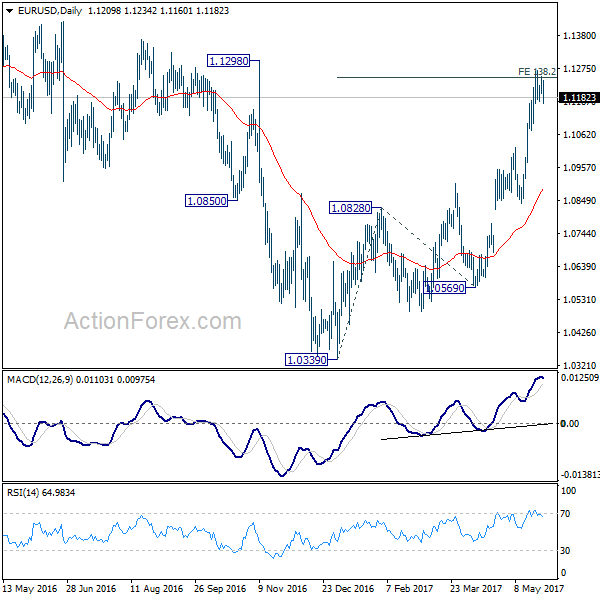 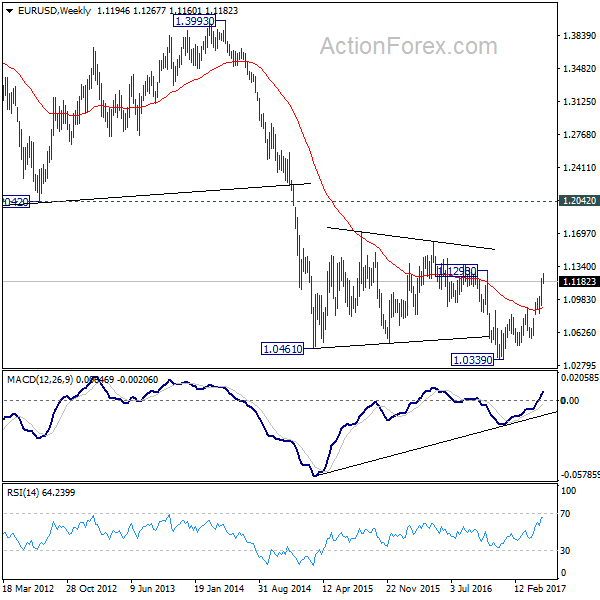 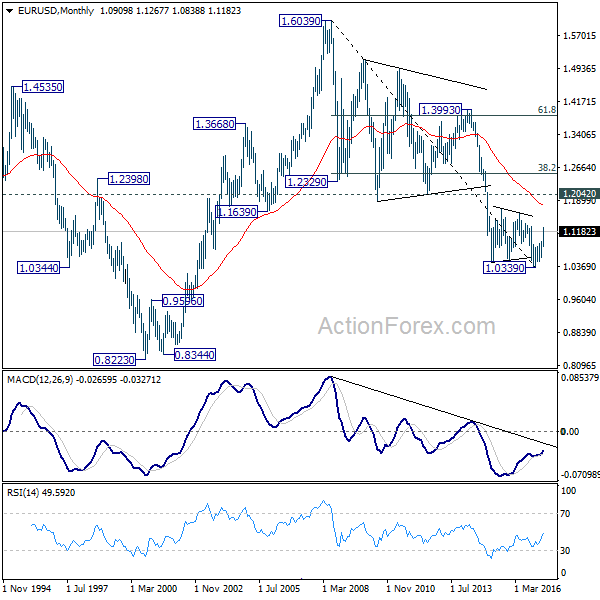