Action Forex
HomeMarket OverviewWeekly ReportDollar Lifted by Fed, Sterling by BoE. But Momentum in Both Currencies...

Dollar Lifted by Fed, Sterling by BoE. But Momentum in Both Currencies Unconvincing

Central banks were back in the driving seats in the forex markets last week. Four central banks, Fed, BoE, SNB and BoJ, delivered their monetary policy decisions. But they were all overshadowed by comments from BoC that indicated the next move would be a hike. Canadian dollar ignored the extended selloff in oil price and ended the week as the strongest major currency. Aussie and Kiwi closely followed and took the second and third places. Sterling was boosted by the surprise that three policy makers voted for a rate hike in BoE MPC meeting and closed the week up against Dollar, Euro and Yen. Dollar followed as Fed, after raising interest rate by 25bps, maintained the forecast of a total of three hikes this year. Meanwhile, Yen and Swiss Franc ended as the weakest major currencies as markets were starting to price in an era of monetary policy stimulus exit.

Doubts on whether US is ready for another hike

While Dollar and Sterling were both firm last week, we found the strength in them rather unconvincing. There are a lot of doubts in the markets on whether growth in US could withstand another Fed hike. Also, the slow down in inflation is seen as a concern of some policy makers, other than Fed Chair Janet Yellen. Dallas Fed President Robert Kaplan indicated on Friday that the decisions to hike was a tough one. He pointed out that "inflation of late has been more muted". And, more evidence on inflation path to 2% target is needed before another hike. Minneapolis Fed President Neel Kashkari, who voted against the hike, also said on Friday that "if we base our outlook for inflation on these actual data, we shouldn’t have raised rates this week."

The market’s hesitation to bet on Fed’s projected rate path was seen rather clearly in treasury yield. 10 year yield dropped sharply to as low as 2.103 after CPI disappointment. But then, TNX recovered after FOMC announcement. The recovery has been very week so far and barely kept TNX above 38.2% retracement of 1.336 to 2.612 at 2.130. It’s also held well below 2.229 resistance and thus maintained bearish outlook for for the near term. We’d still expect further decline in TNX, probably not this week though, to 50% retracement at 1.978.

With the exception of USD/JPY, there was no sign of near term reversal in Dollar. EUR/USD was held above 1.1109 near term support and chance still favors a break out through 1.1298 key resistance. USD/CHF was also held below 0.9807 resistance and maintains bearish outlook for extending recent fall from 1.0342. USD/CAD is held well below 1.3387 near term resistance and continue to expect deeper medium term fall through 1.2968. AUD/USD is on course for 0.7740 resistance despite brief retreat. Nonetheless, GBP/USD stays bearish and we’re still expecting another fall through 1.2614 support level to confirm underlying downside momentum.

Two more BoE MPC policy makers Michael Saunders and Ian McCafferty, joined Kristin Forbes in voting for a rate hike last week. That made it a 5-3 vote to keep interest rate unchanged at 0.25%. Concerns over rising inflation were evidence in the minutes. Policymakers acknowledged that CPI inflation has been "pushed above the 2% target by the impact of last year’s sterling depreciation". It "reached 2.9% in May, above the MPC’s expectation". Policymakers noted that "inflation could rise above 3% by the autumn, and is likely to remain above the target for an extended period as sterling’s depreciation continues to feed through into the prices of consumer goods and services". The members also raised concerns over currency depreciation on inflation. They noted that "2.5% fall in the exchange rate since the May Inflation Report, if sustained, will add to that imported inflationary impetus".

In spite of that, the markets hesitated to jump into Sterling long because of political uncertainties. Theresa May somewhat survived the disastrous election and stayed as the Prime Minister of UK. But she’s now entering into Brexit negotiation with EU in a much weaker position. Formal negotiation will start as scheduled on Monday while May has already conceded to EU’s plan of settling the divorce bill first. Locally, May has been facing a lot of calls for a softer approach on Brexit, as well as cross-party involvement in the negotiation. Any wrong step with EU would pull May back into risk of being ousted.

FTSE stayed somewhat resilient as it drew support from 55 day EMA and recovered, after the post BoE selloff. Upside momentum has been diminishing clearly with bearish divergence condition in daily MACD. And the wedge like structure also indicates the same thing. It should be noted that current up trend started back at 5788.74, on the sharp selloff in Sterling following Brexit referendum. The last leg of rise started after PM May called for a snap election. It’s starting to look like that impact of Pound depreciation on corporate earnings could be starting to fade. That is, if we should seen persistent positive correlation between Sterling and FTSE, it could be the indication of the start of real trouble in the UK economy.

Technically, Sterling also maintained near term bearish outlook against Dollar, Euro and Swiss France. GBP/USD was held well below 1.2977 resistance while EUR/GBP stayed above 0.8639 support. GBP/CHF recovered ahead of 1.2213 key support level last week but upside was limited well below 1.2537 resistance so far. We’re maintaining our view that corrective pattern from 1.1635 has completed with three waves up to 1.3067 already. Deeper decline is expected in the cross as long as 1.2977 holds. Break of 1.2213 should confirm our view and target a new low below 1.1635. 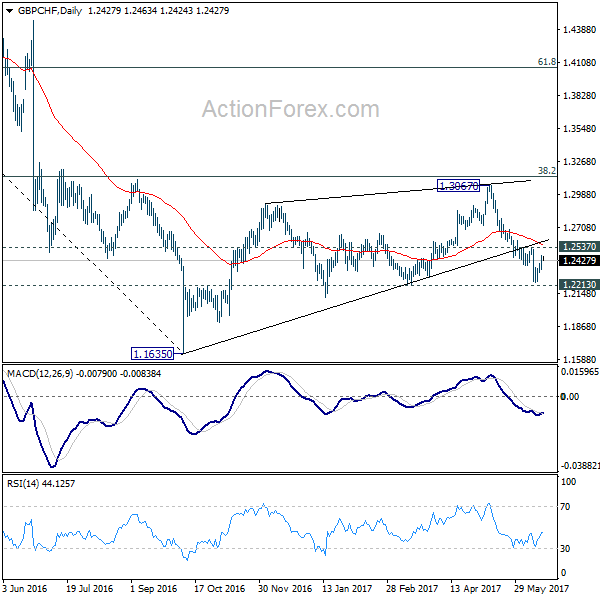 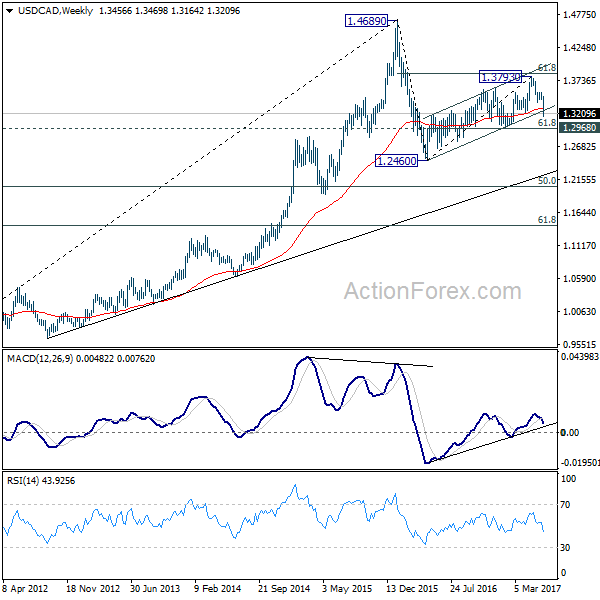 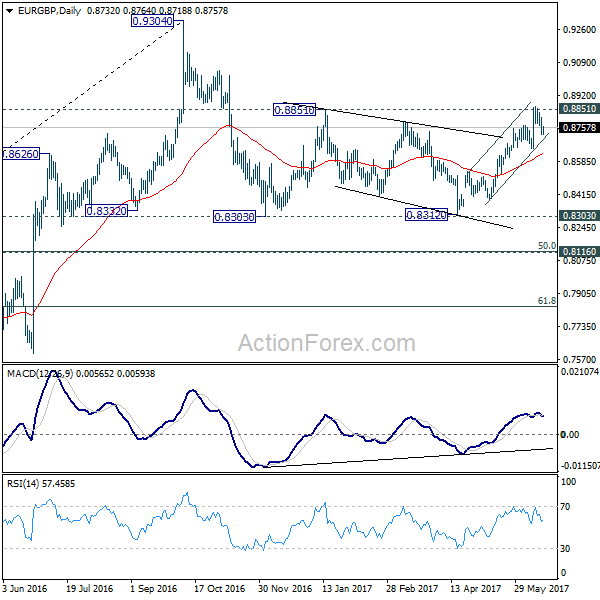 GBP/JPY edged lower to 138.65 last week but rebounded since then. The break of near term falling channel suggests reversal but it’s limited by 142.75 resistance so far. Initial bias remains neutral this week with focus on 142.75. Break will indicate that fall from 148.09 has completed and turn bias back to the upside for this resistance. On the downside, break of 138.65 will resume the decline from 148.09. But in that case, we’d look for bottoming signal around 135.58, which is close to 135.39 fibonacci level, to bring rebound.

In the longer term picture, based on the impulsive structure of the decline from 195.86 to 122.36, such fall should not be completed yet. But we will now pay close attention to the structure of the rise from 122.36 to determine whether it’s a corrective move, or an impulsive move. That would decide whether a break of 116.83 low would be seen. 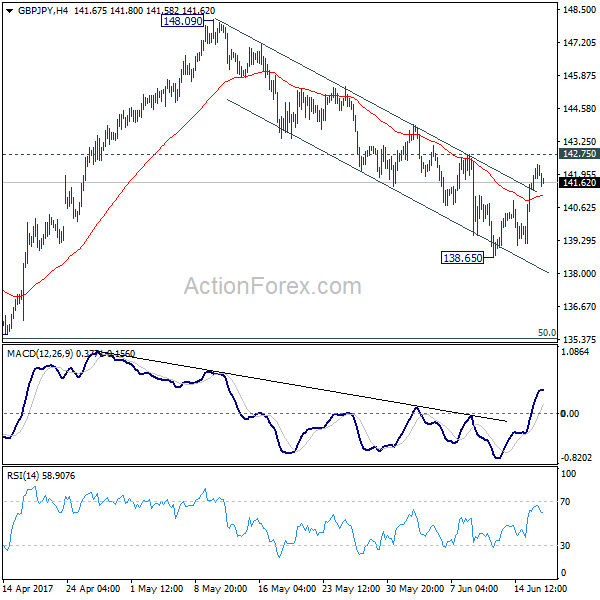 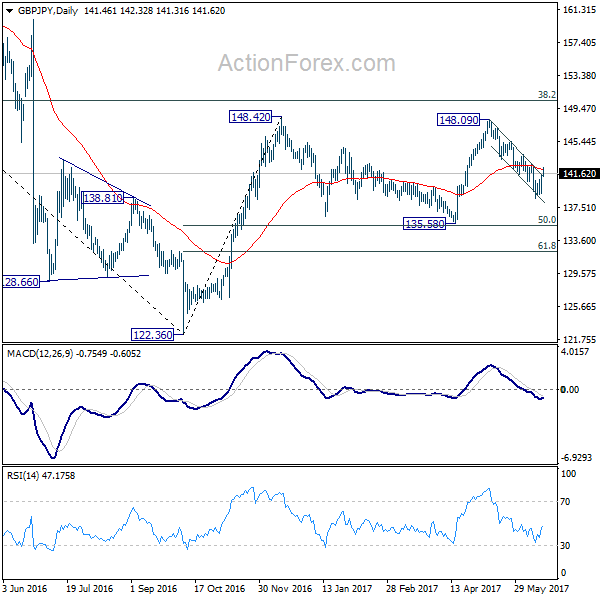 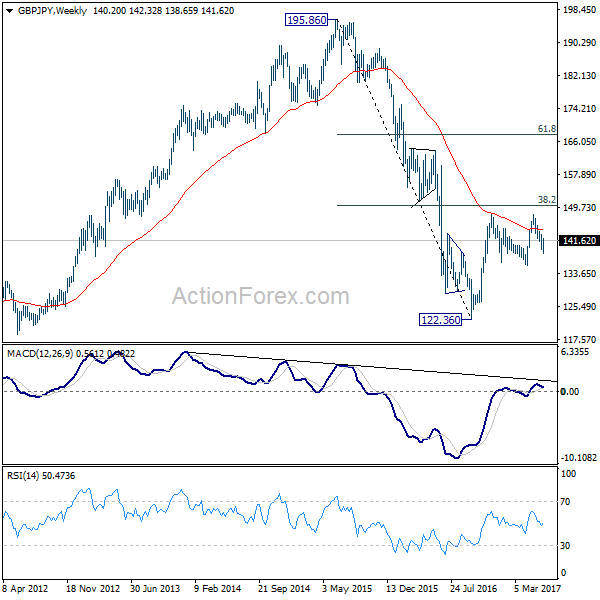 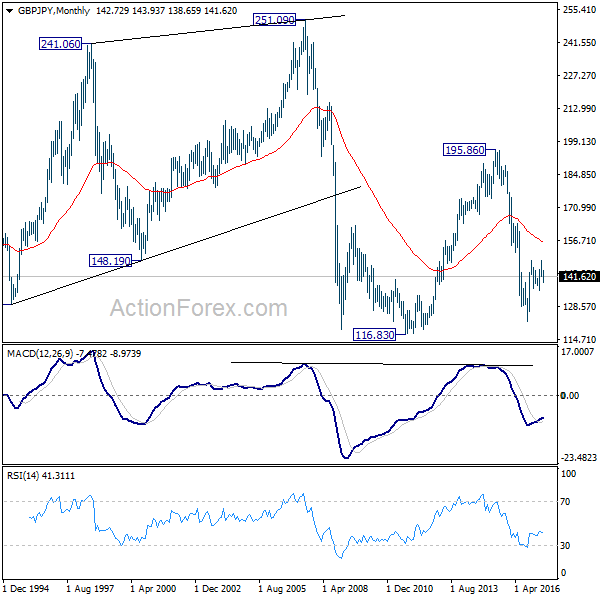