Dollar Jumped on March Hike Expectations, But Overwhelmed by Euro on Politics

Dollar strength dominated the forex markets most of the time last week as speculations of a Fed hike in March heated up. Markets were also relieved as US president Donald Trump’s first address Congress didn’t deliver anything dramatic. Stock indices surged to new record high, taking yields and Dollar up too. Nonetheless, as most of the positive factors in greenback were priced, traders took profit on Dollar long positions after Fed chair Janet Yellen’s comments. And more importantly, Euro staged a U turn after polls showed that far-right French president candidate Marine Le Pen lost ground, thus reducing Frexit risks. Euro has indeed ended as the strongest major currency, followed by Swiss France and Dollar. On the other hand, Canadian dollar ended as the weakest on the sharp pull back in oil price.

After a chorus of hawkish Fed comments, fed fund futures are now pricing 79.7% chance of a rate hike at March 14/15 FOMC meeting. That’s more than double of prior week’s pricing. Fed chair Janet Yellen’s speech on Friday affirmed such expectations. Yellen said that "at our meeting later this month, the committee will evaluate whether employment and inflation are continuing to evolve in line with our expectations, in which case a further adjustment of the federal funds rate would likely be appropriate." And, she also emphasized that "the process of scaling back accommodation likely will not be as slow as it was in 2015 and 2016." This affirmed Fed’s last projection of three rate hikes this year. Meanwhile, the new staff projections to be released this month will now be even more important if Fed does hike. We’d like to see if Fed would project a total of four hikes this year.

However, Dollar’s strength was overwhelmed by the common currency. Euro has been under much pressure recently due to political uncertainties. It’s indeed the weakest one last month. A key factor to watch is French election in April and the run-off in May. A win of anti-Euro far-right leader Marine le Pen will significantly increase risk of Frexit. On Friday, a poll by research firm BVA found that Le Pen would get 26% of votes in the first round in May, down 1.5% from the prior poll on February 23. On the other hand, centrist Emmanuel Macron got 24%, up 3% from prior poll. Conservative Francois Fillon’s support was unchanged at 19%. This is consistent with the base case of most analysts. That is, no one will get majority in the first round and Le Pen will face Macron in the run-off. According to BVA, Macron will defeat Le Pen by 62 to 32 in the one-on-one vote.

Technically, there are two developments to note. Firstly, the strong rebound in 10 year yield last week eliminated that case of a deep correction to 2.130 retracement level. However, despite all the optimism, the TNX is still held inside established range and struggled to take out 2.5 handle decisively. That is seen as one of the factors that’s holding back the rally in the greenback. The markets will look into the non-farm payroll report to be released this Friday. And as noted above, new economic projections by Fed could hold the key. After all, near term outlook in TNX stays neutral for the moment as the consolidation from 2.621 could still extend, even with another fall. But sustained trading above 2.500 will bring a retest of 2.621. Break will resume the medium term up trend from 1.336.

Dollar index resumed the rebound from 99.23 and hit as high as 102.26. Friday’s sharp pull back suggests temporary topping and the index could turn into sideway trading initially this week. As long as 100.66 support holds, further rise is still mildly in favor to retest 103.82 high. However, we’ll stay cautious for two reasons. Price actions from 99.23 are not clearly impulsive yet and that mixes up the outlook in the index. Also, EUR/USD could have a take on 1.0630 near term resistance soon. And break there will likely drag the Dollar index down. Break of 100.66 support will argue that the rebound from 99.23 is completed and turn bias back to the downside for this support.

Opportunity to turn long in Euro

Our EUR/JPY short strategy last week was totally wrong as Yen reversed with treasury yield and Euro staged a strong rebound. Technically, it looks like a good timing to turn long in Euro. That’s from the considerations that EUR/JPY defended 118.23 cluster support and rebounded. EUR/AUD defended 1.3671 support and rebounded. Both crosses are likely in near term reversal. 1.0630 resistance in EUR/USD and 0.8643 in EURGBP, if taken out, will affirm the turn in overall trend in Euro too. However, we will be very cautious as it’s highly affected by political developments. To play safe, we will buy EUR/AUD on a dip to 1.3900, with a stop at 1.3800 this week. 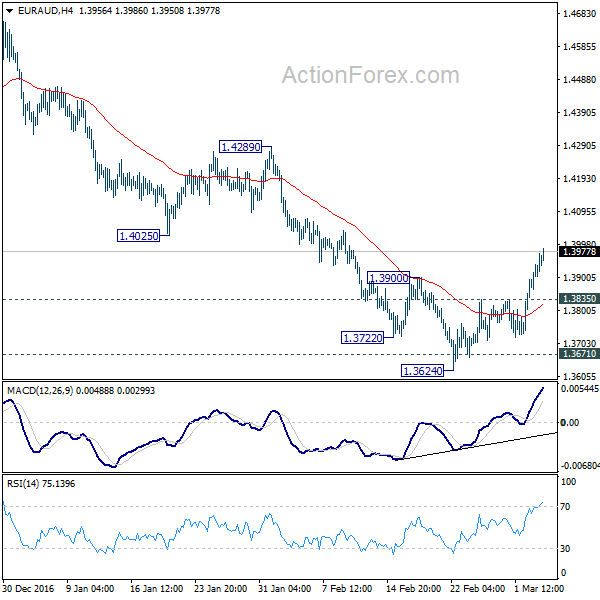 EUR/USD’s decline attempt was contained at 1.0494, above 1.0493 support and rebounded. Initial bias stays neutral this week first. On the upside, break of 1.0630 resistance will argue that pull back from 1.0828 is completed. Also, rise from 1.0339 could possibly be resuming. In that case, intraday bias will be turned back to the upside for 1.0828 resistance and above. On the downside, below 1.0493 support will affirm the case that fall from 1.0828 is resuming the larger down trend. In that case, intraday bias will be back to the downside for resting 1.0339 low. 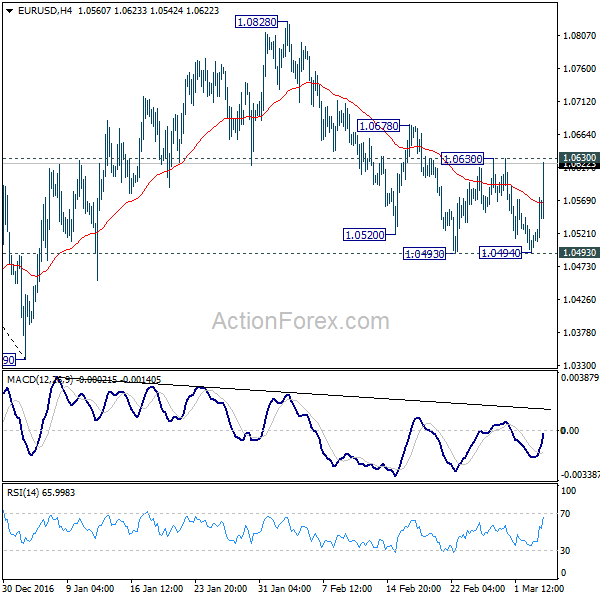 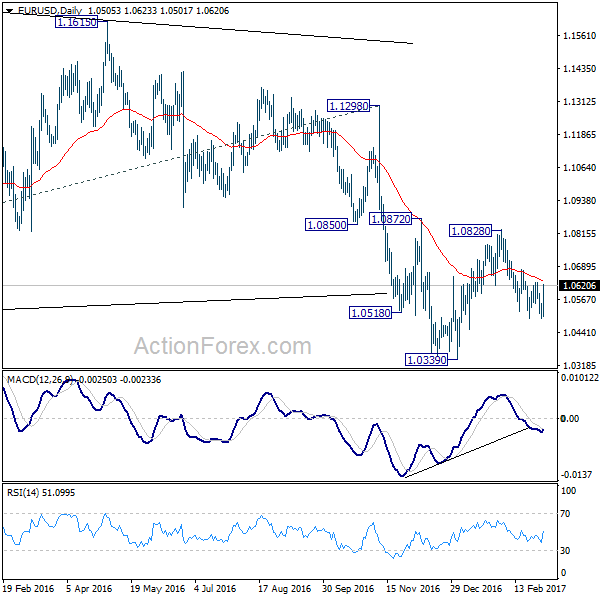 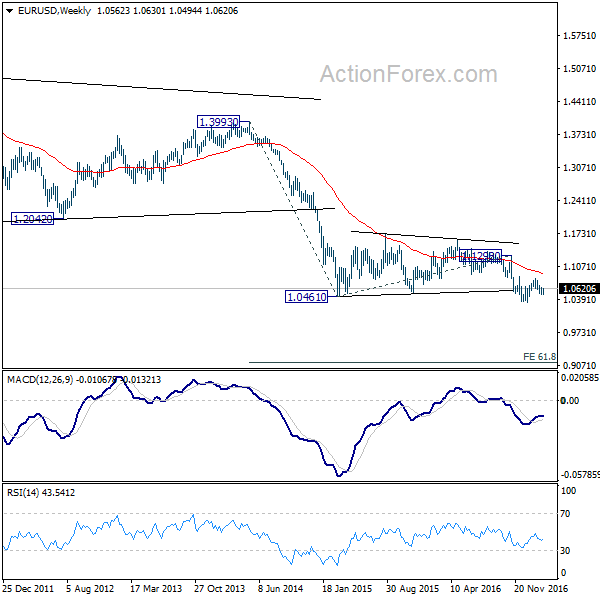 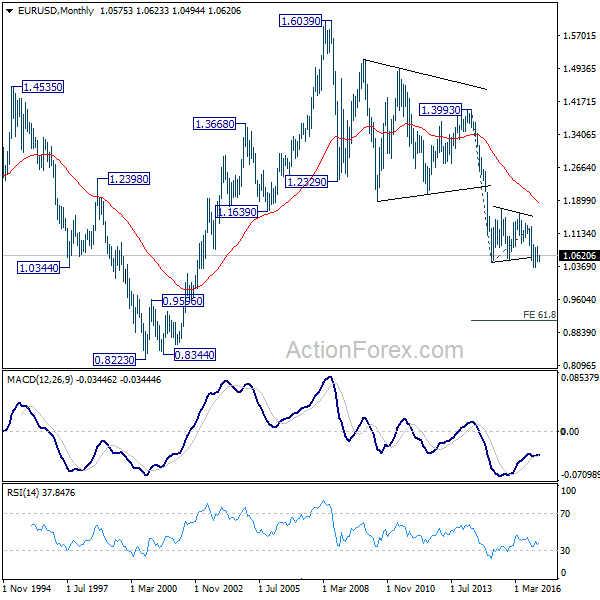