Yen, Dollar, Aussie, Gold and Stocks in Focuses in a Busy Week

Dollar’s selloff extended last week, after rather uneventful Fed meeting. The decline was particularly serious against generally strong European majors. Sterling ended as the strongest one this time, followed by Euro and Swiss Franc. While the greenback was weak, New Zealand and Canadian Dollar were even worse, with the latter weighed down by pull back in oil price. Gold and Silver lost some momentum after recent powerful run.

The upcoming week is also guaranteed to be interesting with a super busy calendar. Central bank activities include RBA and BoE rate decisions. Economic data include US ISMs and non-farm payroll, Canadian employment, Japan GDP, New Zealand employment and China PMIs. These event could further shape the interactions between Yen, Dollar, Gold, Aussie and stocks as discussed below. 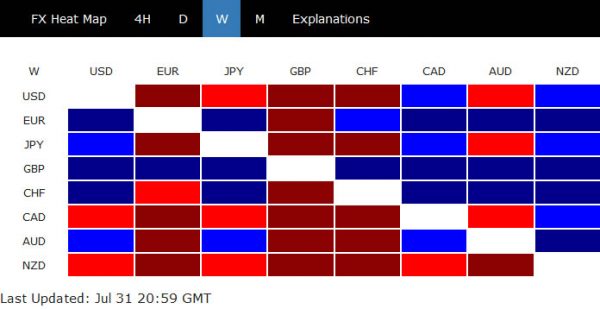 The late selloff in the Japanese Yen last week is something worth a note. So far, there is no definite reason for the steep decline. Some attributed it to comments from Finance Minister Taro Aso on Friday, as see said exchange rate “stability is important” and he’s “closely monitoring it with a sense of urgency”. Other than that, the selling could be driven by renewed strength in US stocks, the strong rebound in USD/JPY, or just month-end flows. We might find out the underlying reasons soon.

Last week’s strong rebound in NASDAQ suggests that 10182.46 support was defended well. The double top reversal scenario was invalidated, with near term bullishness retained. We’ll likely see NASDAQ resuming the record run again this week, towards next medium term target of 138.2% projection of 6190.17 to 9838.37 from 6631.42 at 11673.23. 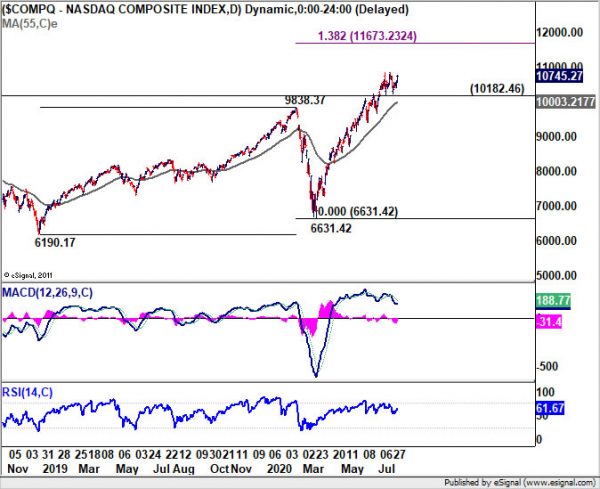 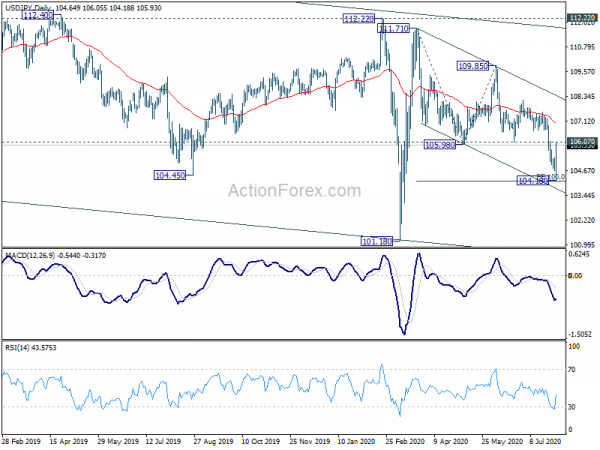 However, even if USD/JPY’s rebound extends, it unsure if that would translate into Dollar strength elsewhere immediately. We’ll tend to use gold as a guideline to judge if the greenback is ready for a sustainable rebound. So far, Gold is struggling to get rid of 100% projection of 1451.16 to 1747.75 from 1670.66 at 1967.25 cleanly. But there is no decisive selling for a correction yet. In case of further rally towards 2000 handle, Dollar would likely stay pressured for a while more at least. However, break of 1939.20 support will finally suggest a correction is underway. That could be accompanied by a rebound in the greenback. 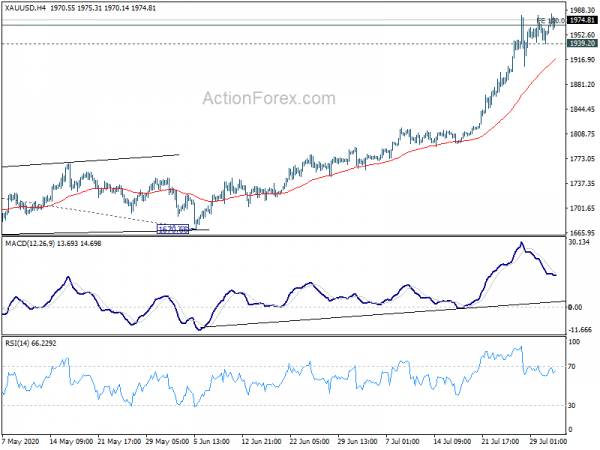 Australian Dollar would be another one to watch this week. Victoria state has just announced to enter into stage four lockdown, with night curfew as part of its harshest movement restrictions to date to contain the out of control coronavirus outbreak. There would be economic impact for sure, but fortunately it’s relative limited. Nevertheless, the current development might prompt RBA to turn more cautious on the outlook and reiterate its readiness to act further.

Aussie has been struggling to extend the rally from March low since early June. EUR/AUD failed to get through 1.6 handle twice while AUD/JPY struggled to sustain above 76.54 resistance. A break of EUR/AUD resistance will be one of the first signs of Aussie’s reversal. More seriously, if AUD/JPY could break through 72.52 support in the back background of Yen weakness, that would be a strong sign of Aussie’s problem too. 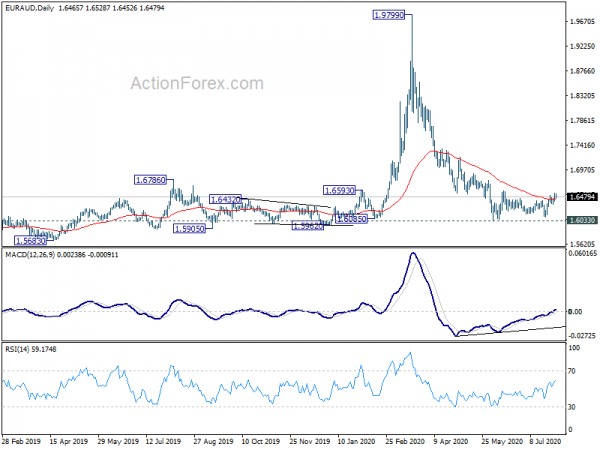 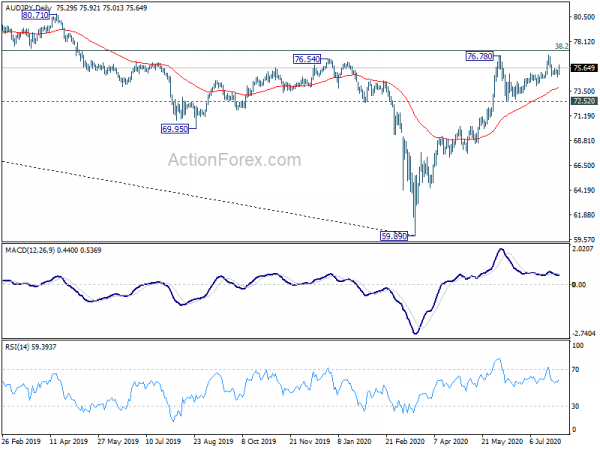 As a reference, movements in the ASX All Ordinaries index resemble that of AUD/JPY rather closely since March. ASX struggled to sustain above 61.8% retracement of 7289.7 to 4429.1 at 6196.95. Upside momentum has been clearly diminishing as seen in daily MACD. Firm break of 55 day EMA (now at 6018.89) would be the first sign of reversal. Further break of 5826.60 should confirm that a sustainable correction is underway. If this happens together with the above mentioned bearish development in AUD/JPY, Aussie’s rebound could be declared finished. 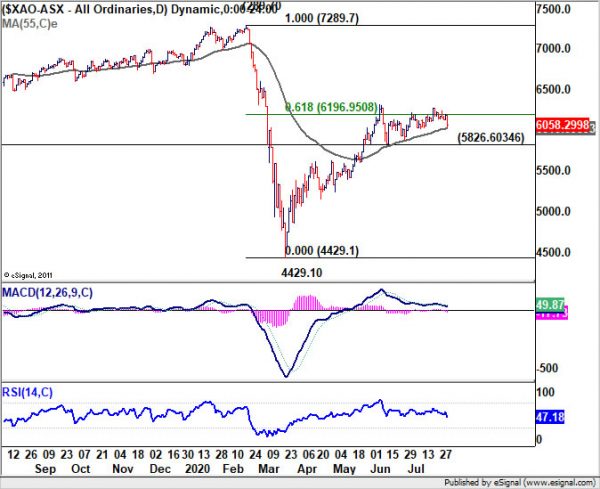 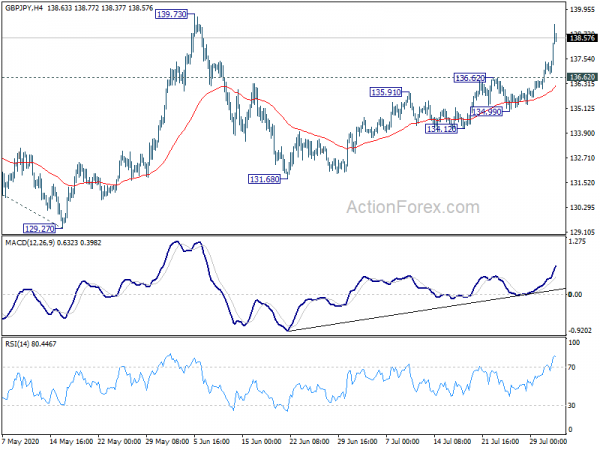 In the bigger picture, rise from 123.94 is currently seen as a rising leg of the sideway consolidation pattern from 122.75 (2016 low). As long as 147.95 resistance holds, an eventual downside breakout remains in favor. However, firm break of 147.95 will raise the chance of long term bullish reversal. Focus will then be turned to 156.59 resistance for confirmation. 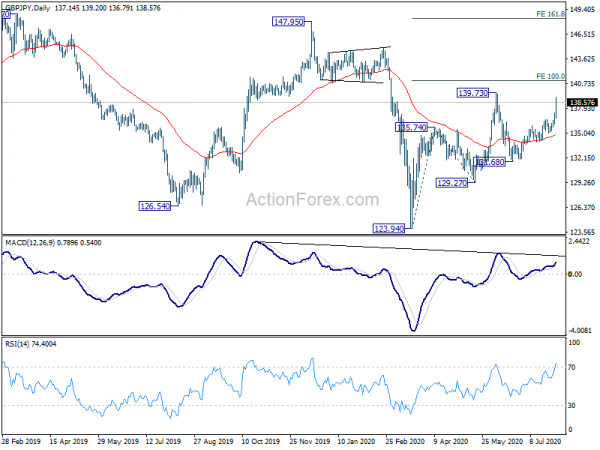 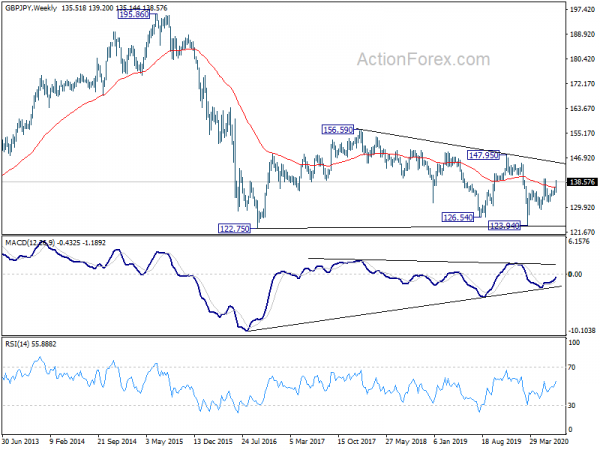 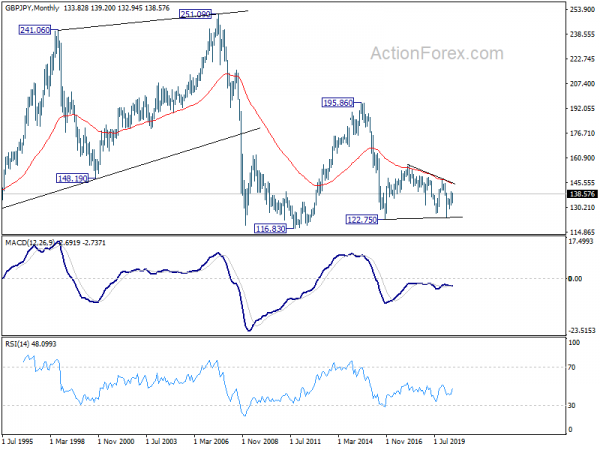