The set of strong non-farm payroll data from US should have finalized the case for Fed to hike interest rate this week. Dollar was indeed given a boost over last week and ended strongly. Nonetheless, the greenback was firstly overwhelmed by strength in Euro, and secondly retreated on profit taking. Overall, Euro ended the week as the strongest major currency as supported by upbeat comments from ECB president Mario Draghi as well as rate speculations. Dollar followed as the second. At the other end, Sterling was troubled by worries over the fading impact it depreciation last year on the economy, uncertainties over Brexit terms, and uninspired by UK budget. The pound ended as the second weakest major currency next to Kiwi.

ECB left monetary policies unchanged as widely expected. Latest staff economic projections showed slight upgrade in the forecast for both growth and inflation in 2017 and 2018. More importantly, Draghi sound relatively upbeat in the post meeting press conference and noted that "there was a general recognition that the balance of risk has improved, certainly as far as growth is concerned". More in Cautiously Optimistic Draghi Sees No Urgency to Add Stimulus, Risks Less Pronounced.

In addition, there were news reports on Friday saying that the ECB governing council members have discussed the possibility of raising interest rate before the asset purchase program ends by the end of the year. It’s noted that some members were clearly unhappy with the adverse impacts of negative interest rates and would like to at least move them back to positive territory as soon as possible. Some analysts are predicting ECB to hike rates around the turn of 2017/18 with some forecasting a hike as early as this September.

…focus temporarily away from politics

The above developments sent the common currency broadly higher last week. Traders are temporarily shifting their attention away from the political uncertainties in Eurozone. And of course, based on recent economic data, the outlook for Eurozone has brightened up a bit, but that’s only on provision that the political risks don’t materialize. While technically developments support further upside in Euro in near term, the road would likely stay bumpy.

While Friday’s solid NFP report should seal the deal for Fed to hike interest next week, it wasn’t strong enough to push speculations of more than three rate hikes this year. Fed fund futures are pricing in 88.6% chance of interest at 75-100bps after March meeting. There is 53% of fed funds rates hitting 100-125bps after June meeting, and 62.1% of hitting 125-150bps by the end of the year. Fed’s new economic projections to be released this week will be the key to guide market expectations.

Treasury yields staged a strong rally last week but the close was not too convincing yet. 30 year yield reached as high as 3.201 and breached 3.197 resistance. But it pared some gains to close at 3.169. 10 year yield reached as high as 2.615 but failed to take out 2.621 resistance and closed at 2.582. 2.545 support and 2.621 resistance are the two levels to watch in TNX this week, in particular on Wednesday with FOMC announcement. That would be the make or break levels for Dollar in near term.

Dollar index failed to extend the rebound from 99.23 last week and closed sharply lower on Friday at 101.25. Further rise is still in favor as long as 100.66 support holds. But the structure of the rise from 99.23 is unconvincing, with a corrective look. Indeed, a break of 100.66 will indicate that the rebound is finished and would turn near term outlook bearish for 99.23 and below. When Dollar index does resume the rise again, we’ll be cautious on topping around 103.82 high if we don’t see any upside acceleration.

The coming week will be very busy with a lot of key events. Fed, BoJ, SNB and BoE will meet with main focus on FOMC. Other three central banks will stand pat. Also, focus will also be on German ZEW, UK employment. US CPI and retail sales, Australia employment and New Zealand GDP.

Regarding trading strategies, as suggested in last week’s weekly report, we bought EUR/AUD at 1.3900 last week as the cross pulled back to 1.3874. Our stop at 1.3800 wasn’t hit. And subsequent rise to as high as 1.4178 affirmed our bullish view. We’re tentatively treating EUR/AUD as reversing medium trend. And this view is support by the cross defending 1.3671 key support level and bullish convergence condition in daily MACD. Hence, for the moment, we’ll raise the stop to 1.4000, slightly below 1.4014 resistance turned support, to give the position a bit of room to run. The key level is channel resistance at around 1.4469. We’d decide whether to take profit around that level later, based on momentum. 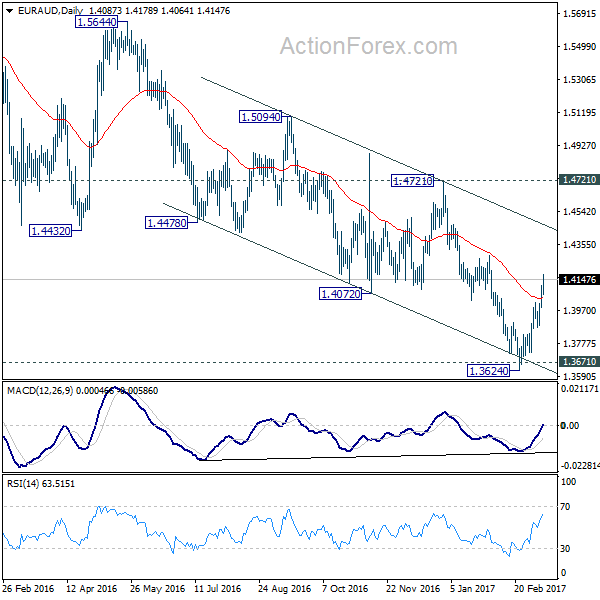 In addition to holding long in EUR/AUD, we’d like to consider buying USD/JPY this week. The pair’s break of 114.94 resistance indicates near term reversal. That is, corrective pull back from 118.65 has completed at 111.58 already, on double bottom pattern (111.58/111.68). The view is clouded by the pull back in Dollar after NFP. Also, yields failed to sustain above recent highs for up trend resumption. Nonetheless, the recovery in stocks on Friday indicates stabilization. And the pull back in DJIA, S&P 500 and NASDAQ could be over. It’s an opportunity to try to bet on hawkish FOMC projections, but only with a tight stop. Hence, we’ll buy USD/JPY on dip to 114.00, with a stop at 113.50, just below 113.60 support. 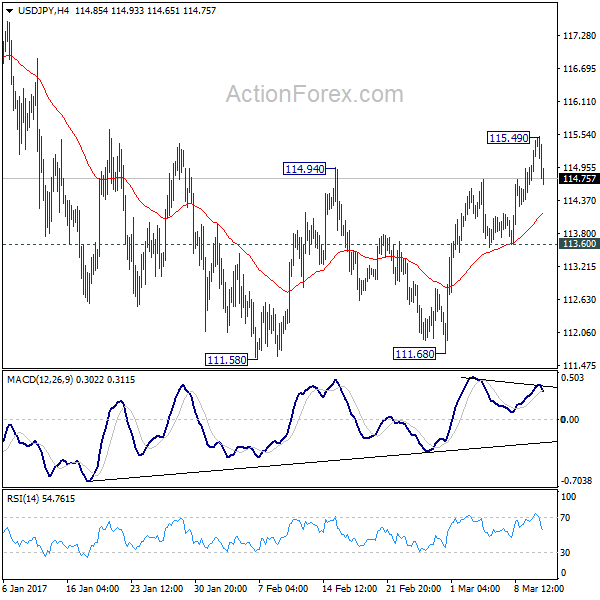 EUR/USD rebounded strongly last week and hit as high as 1.0698. The strong break of 1.0630 resistance indicates completion of corrective pull back from 1.0828. More importantly, whole rise from 1.0339 is possibly resuming. But still, such rise is still seen as a correction and the larger down trend should resume after it completes. 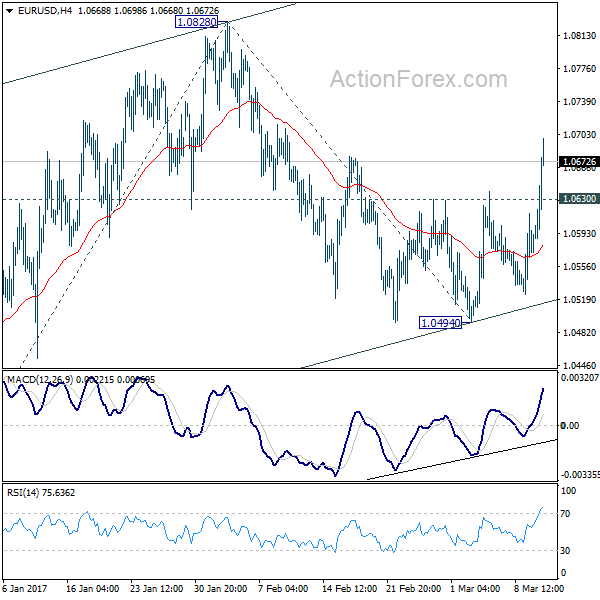 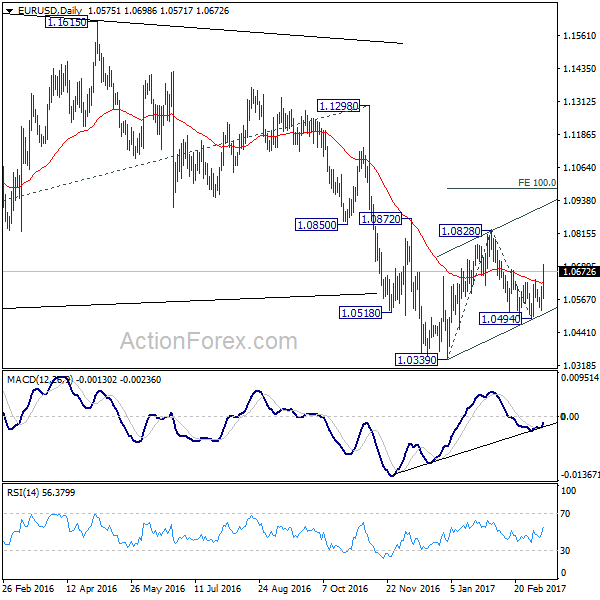 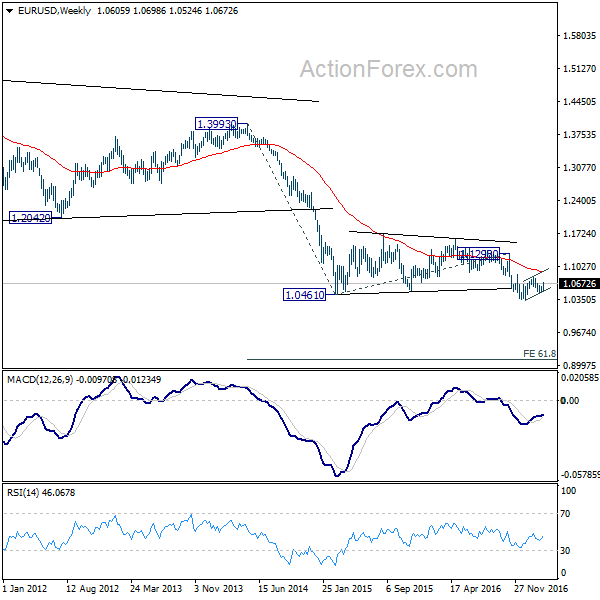 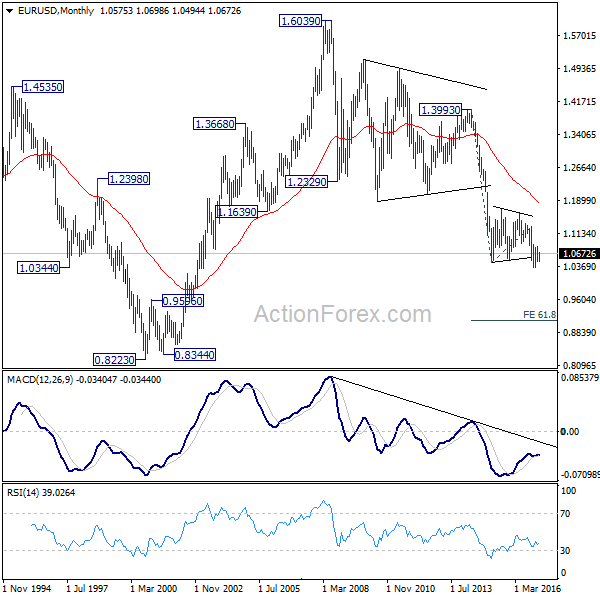