Dollar survived the geopolitical risks in Korea peninsula, damage of hurricane Harvey, and a set of disappointing non-farm payroll data, to end the week "mixed". While the pull back in EUR/USD caught much attention, we’d like the point out that Dollar ended the week lower against Canadian Dollar, Australian Dollar and Sterling. Indeed, the pound ended as the third strongest major currency, next to Canadian Dollar, even though the third round of Brexit negotiations ended with no concrete progress but more verbal exchanges between EU and UK officials. On the other hand, as risk aversion came and went quickly, Yen and Swiss Franc ended as the weakest ones, just next to Kiwi. Traders could take a brief rest on Monday as US and Canada will be on holiday. But three central bank meetings, RBA, BoC and ECB promise much volatility ahead.

The case for a reversal in Dollar is starting to build up. But it’s not quite there yet. There are arguments for bottoming in the greenback. Fundamentally, the reactions to negative news last week showed much resilience in dollar. Also, markets are generally confident that Fed will continue with the announcement of balance sheet normalization this month. While the markets are still uncertain on whether Fed will hike in December, fed fund futures are pricing in more than 40% chance on it, slightly up from a week ago.

However, there are also arguments to maintain bearish outlook. For example, EUR/USD is holding well above 1.1661 key support level. USD/CHF is kept well below equivalent resistance at 0.9772. USD/JPY is held below 100.94 near term resistance. AUD/USD is extending the rebound from 0.7808, despite weak momentum. And USD/CAD even resumed medium term down trend through 1.2412 low. Dollar index is kept well below 94.14 structure resistance. And the fall from 103.82 is still mildly in favor to continue.

At the same time gold has indeed closed higher on Friday in spite of Dollar’s rebound. Gold on track to extend the rally from 1124.3 to test 1377.5 (2016 high). Much more is still needed to confirm a reversal in Dollar.

Euro dives as ECB could wait till December before announcing tapering

At this point, we’d slightly prefer to attribute the rebound in Dollar to the sharp turn in Euro last week. There were firstly report by Reuters that some unnamed ECB officials are concerned with the strength in Euro. And thus, the central bank might opt to "muddle" through September meeting this week. It’s originally believed, as we also argue in our report (ECB Policy Stance Not to be Affected by Strong Euro) ECB will announce the tapering plan in October. However, selling in Euro have intensified on Friday after Bloomberg reported that ECB could wait until December 14 meeting before finalizing the tapering plan.

Technically, the most notable turn in Euro’s fortune is against Sterling in EUR/GBP. As we also pointed out in our technical report before, we have been cautious on strong resistance from 0.9304 high to bring reversal. The rejection from this level last week argues that a short term top is formed. It’s too early to confirm is fall from 0.9305 is starting as the third leg of that consolidation from 0.9304 that could bring another test on 0.8303 support. But at least a dip back to 55 day EMA (now at 0.8992) is likely in near term. 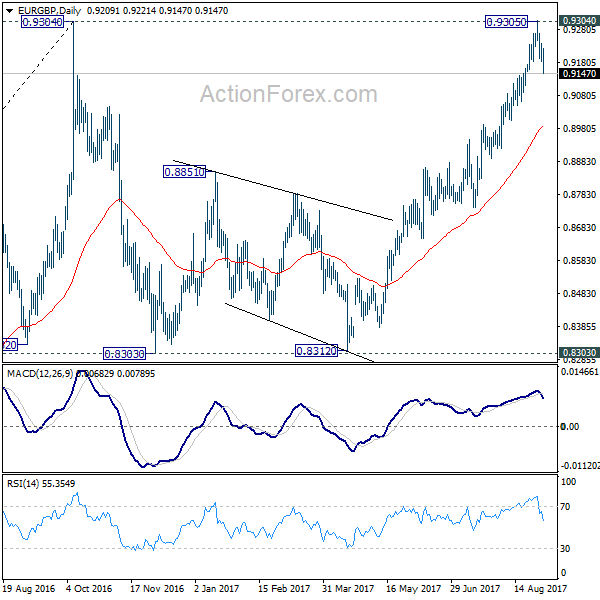 The fate of Euro will very much depends on the outcome of this week’s ECB press conference. There will likely be some support to bring Euro back to life if President Mario Draghi starts signing that a change in coming. At the end, ECB might still decide to conclude the tapering plan in December. But Euro bulls would like to hear is the confirmed intention, as well as the non-concern over Euro’s strength.

The strong GDP data from Canada lifted the chance of a rate hike by BoC this week to 50%, according to overnight index swaps market pricing. BoC has been clear in its communications that it’s looking through temporary slow down in inflation. And it’s normalization interest rates for the 12 months ahead. Solid growth in Canada clears much worry for the central bank for sure. However, considering that BoC has just raised interest rate by 25bps to 0.75% back in July, September seems to be too early for another move. Nevertheless, Canadian Dollar would likely stay firm at the initial part of the week. And buying will jump in again if BoC signals in the statement that it’s ready to move again in October. 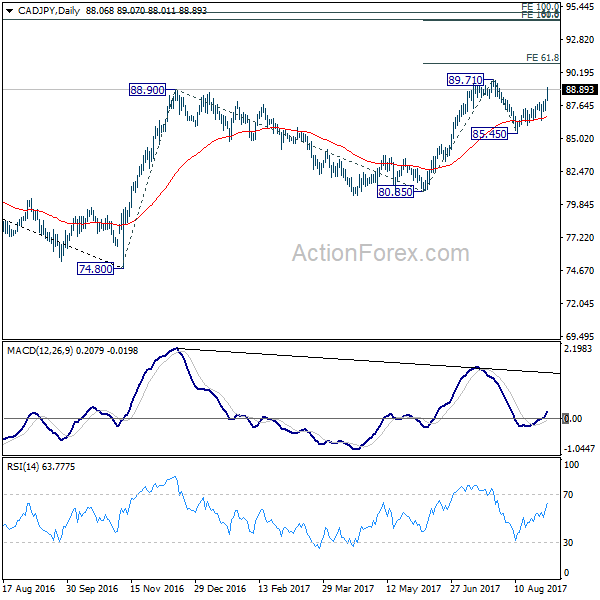 There is very little chance for RBA to change monetary policy this week. It’s clearly that the central bank is happy with development in the job markets but worried about housing. Governor Philip Lowe has also made it clear that the next move will be up rather than down. In the absence of pick up in wage growth and inflation, there is little reason for the central bank to hike interest rates yet though. And there should be much surprise from this week’s statement.

Such neutrality in RBA has already been in sharp contrast to the dovishness of RBNZ. RBNZ governor Graeme Wheeler has repeated his rhetoric to talk down the Kiwi last week. And, the surge in AUD/NZD and break of 1.1017 resistance now suggests completion of the medium term consolidation from 1.1638. And the whole rise from 1.0016 is likely resuming. Further rise should now be seen in near term to 1.1331 resistance. Firm break there will likely pave the way to long term fibonacci level at 50% retracement of 1.3793 (2011 high) to 1.0016 (2015 low) at 1.1905. 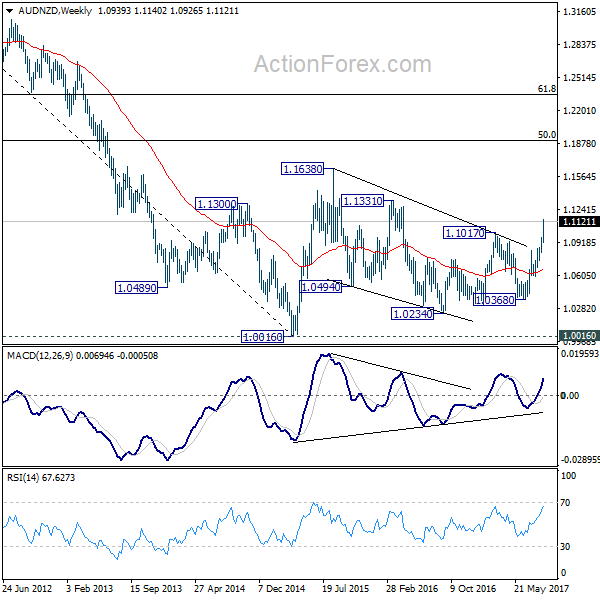 Regarding trading strategy, we held on to EUR/USD long (bought at 1.1846) last week. The pair did jump to as high as 1.2069 but retreated sharply since then. Despite a string of Dollar negative news, there was no follow through buying in the pair. And risk of a deeper pull back is increasing considering EUR/GBP was rejected from 0.9304 key resistance. Therefore, we will just close the position at market this week first.

On the other hand, we’ll try to ride on the another bullish wave in Canadian Dollar and buy CAD/JPY at market. Stop will be placed at 87.90. Above mentioned 94.31/95 resistance zone will be our target.

EUR/USD jumped to 1.2069 last week but retreated sharply since then. The rebound from 1.1822 was short lived as the pair turned southward again. Initial bias is neutral this week first as consolidation from 1.2069 could extend. Below 1.1822 will bring deeper fall. But after all, there is no clear sign of trend reversal yet. Outlook will remain bullish as long as 1.1661 holds. Break of 1.2069 will extend larger rise from 1.0339 to next key fibonacci level at 1.2516. Nonetheless, break of 1.1661 will bring much lengthier consolidation first. 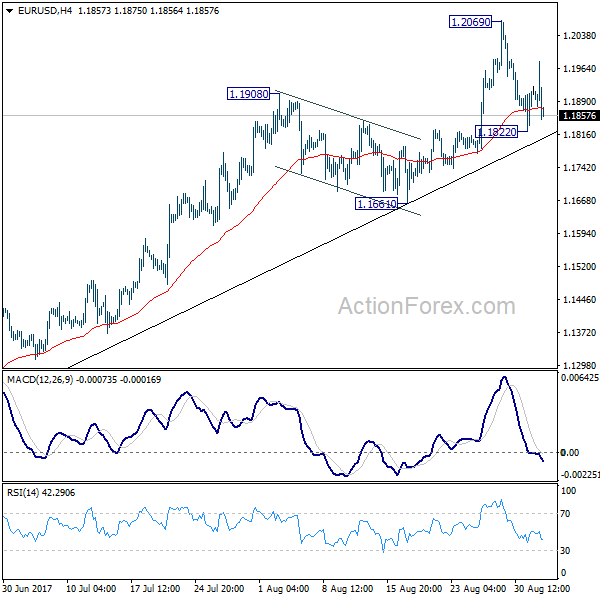 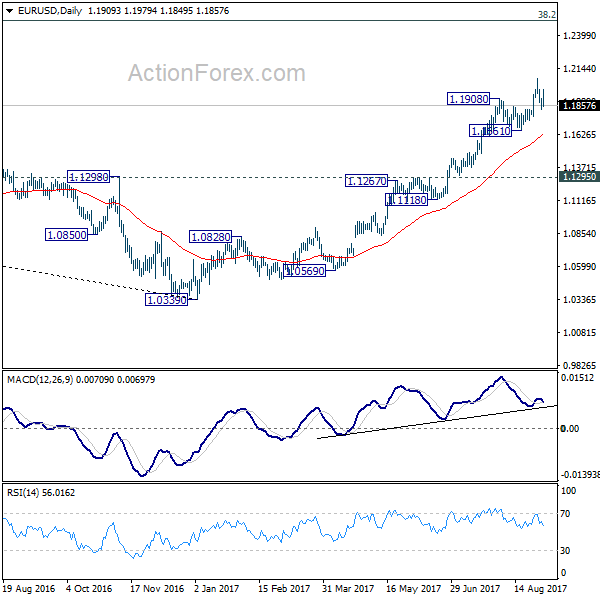 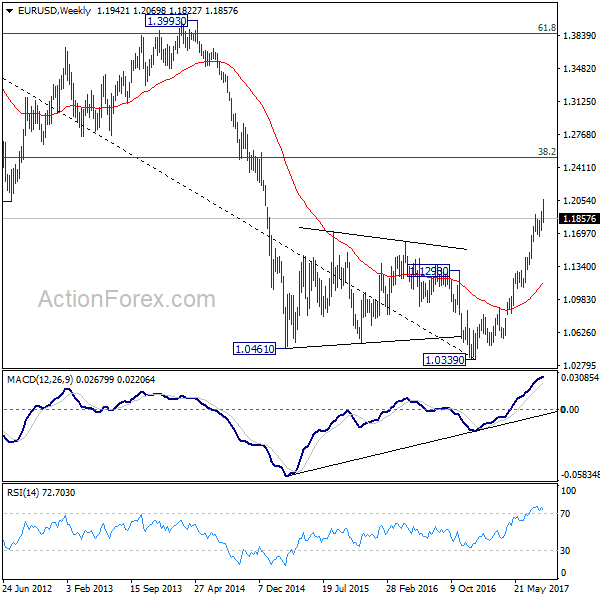 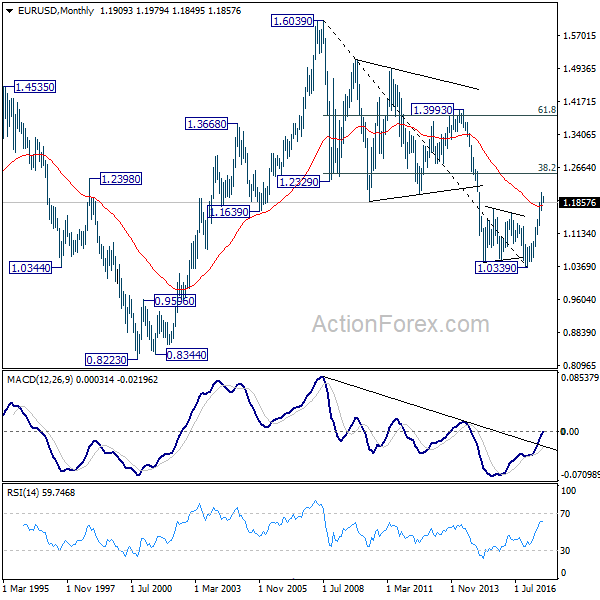