The financial markets traded with solid risk appetite last week and the three major US equity indices surged to new record highs in US president Donald Trump’s first week in White House. Markets took Trump’s signing of some executive orders, include trade and immigration, as sign that he will deliver his election promise and push an expansive fiscal policy. Nonetheless, the rally in stocks and yields lost some steam towards the end of the week after disappointing Q4 GDP data. And Dollar ended mixed. Meanwhile, Sterling ended as the strongest major currency as Supreme Court ruled that prime minister Theresa May’s Brexit plan must seek parliament approval. The sale of a new 40 year government bond in UK also attracted record demand, showing appetite for UK assets. Meanwhile, Yen ended as the weakest one as BoJ stepped up its asset purchases to cap the rally in JGB yields.

FOMC rate decision, US non-farm payroll and BoE rate decision will be the main focuses in the week ahead. Currently, fed fund futures are pricing in 24.4% and 71.9% chances of a rate hike by March and June respectively. Recent comments from Fed officials suggested that Fed is still on course for three hikes this year. But there are already some speculations that the central bank is ready for a quicker path based on optimism in other parts of the markets. The greenback could be given a boost if FOMC sounds open to an earlier hike in the accompanying statement. Meanwhile, dollar bulls will also look into a string of data, including PCE on Monday, ISM manufacturing on Wednesday and non-farm payroll on Friday for excuses to strike a come back.

Technically, we’d firstly reiterate that price actions from 103.82 in the Dollar index are corrective in nature. This is supported by the development in yields which followed stocks higher this week. That is price action of TNX from 2.621 are corrective in nature too. Hence, even in case of another fall, down side of Dollar index should be contained by 98.91/99.43 support zone (61.8% retracement of 95.88 to 103.82 at 98.91. However, we wont’ be surprised to see the index jumps the gun on loss on momentum and rebound from 100 psychological level. And a break above 55 day EMA (now at 100.90) would be the first sign of near term reversal.

BoE rate decision will be another focus on the week, in particular as the central bank is scheduled to release the quarterly inflation report. It’s generally expected that based on recent strong data, BoE would likely upgrade both growth and inflation forecast. Markets are indeed pricing in more than 50% chance of a rate hike by BoE by the end of the year. But of course, uncertainty over Brexit remains and the picture could still change largely when prime minister May finally trigger the Article 50 for Brexit in March. But for the time being, a slightly hawkish BoE message this week could give the pound an extra push.

For the near term, EUR/GBP looks set to extend recent fall from 0.9304. This is supported by the firm break of the near term channel from 0.8303 last week. Meanwhile, GBP/JPY’s strong rise last week also argue that that rebound from 122.36 is ready to resume. 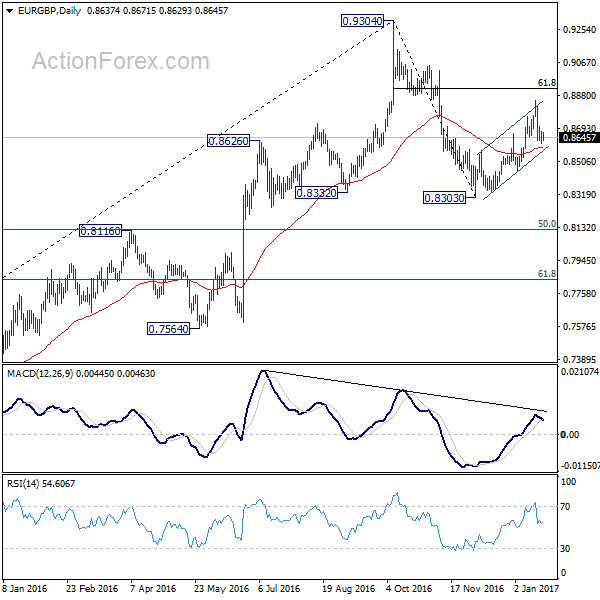 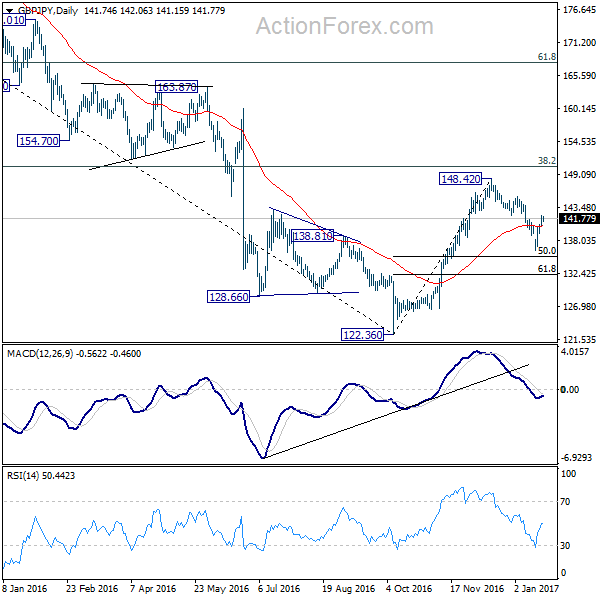 Regarding trading strategies, we’d formulate our plan for the week based on these points. Firstly, we’d expect risk appetite to continue with US indices extending the record runs and take global equities higher. Such development should continue to exert pressure on the Japanese yen. Secondly, there is prospect of further rally is Sterling as BoE would very likely at least sound more comfortable regarding the economic outlook. Thirdly, there is also some prospect of a rebound in Dollar, taken up by stocks and yield, as well as a rebound from 100 in dollar index.

EUR/USD edged higher to 1.0774 last week but lost momentum since then. Initial bias is neutral this week first. Price actions from 1.0339 are seen as a corrective rise. In case of extension, upside should be limited by 1.0872 resistance. Break of 1.0588 will indicate that such rise is completed and turn bias to the downside for retesting 1.0339 low. 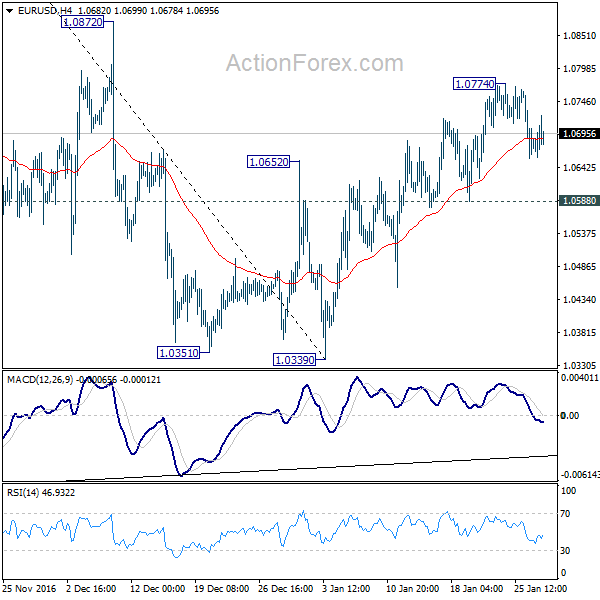 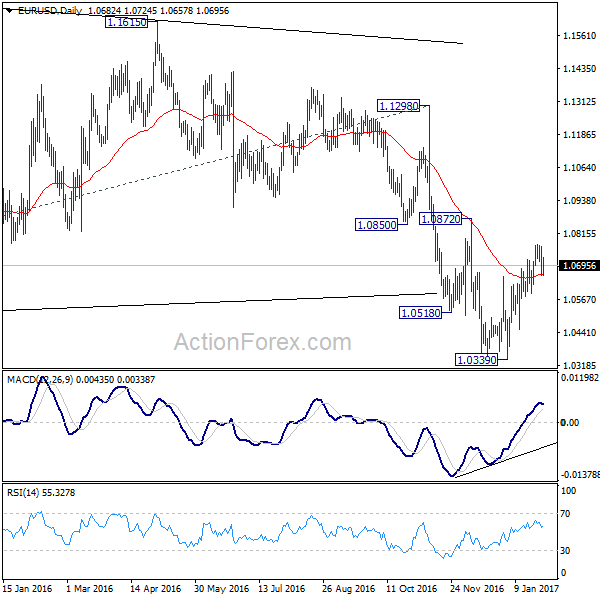 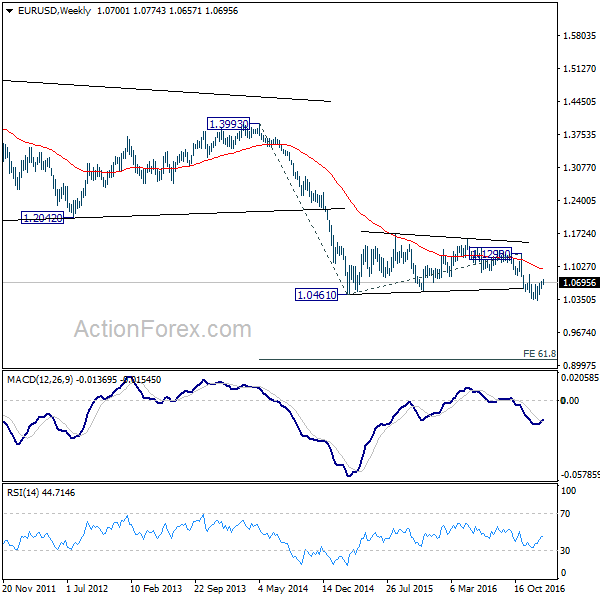 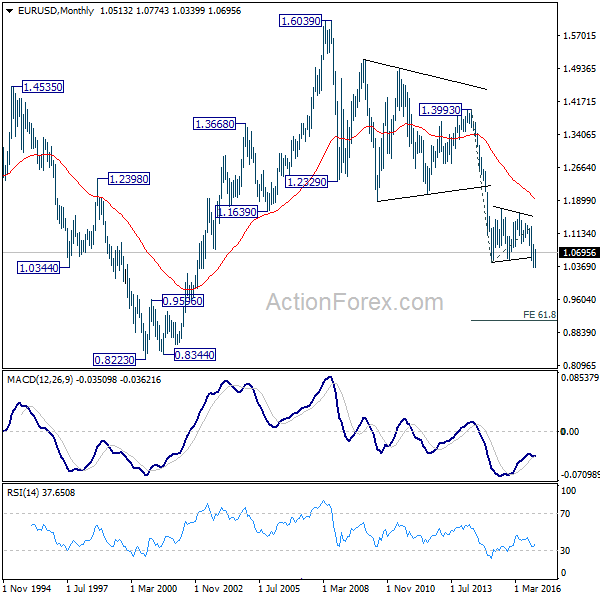