Action Forex
HomeMarket OverviewWeekly ReportRisk-off Sentiment to Continue, But the Worst is Behind Sterling

Sterling surprisingly ended as the best performer last week, as it staged an impressive U-turn after initial selloff. BoE’s intervention should have saved the Pound for now. The development also helped Euro rebound while Dollar trailed behind as third. Rally in Dollar looked a bit exhausted as it failed to ride on intensifying risk-off sentiment.

On the other hand, commodity currencies tumbled broadly, following worsening investor sentiment. New Zealand Dollar led the way but Australian and Canadian Dollar were not too far behind. Yen was mixed as the impact of Japan’s currency intervention faded.

US stock markets ended last week with intensifying selloff. DOW closed down another -500pts to end the month down nearly -9%, worst monthly drop since March 2020. It’s also down more than -5% in Q3, and around -20% this year. Other majors didn’t perform better, with S&P down nearly -9% in September and nearly -24% this year. NASDAQ was down -10% this month, and more than -30% this year.

On the one hand, Fed’s tightening is set to continue on aggressive pace. Markets are pricing in more than 50% chance of another 75bps hike in early November, while the federal funds rate should top 4% be the end of the year for sure. On the other hand, geopolitical risks look likely to worsen after Russia’s annexation of four of Ukraine’s territory, and threatened to use nuclear weapons. To protect its territory and people, Ukraine is officially applying for NATO membership, to make the “de facto” alliance “de jure”. 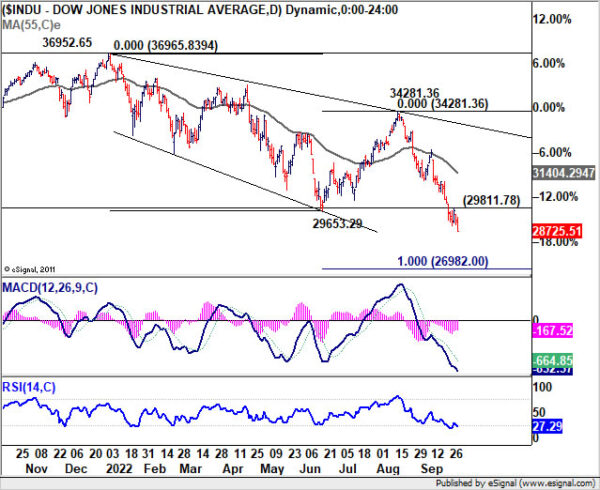 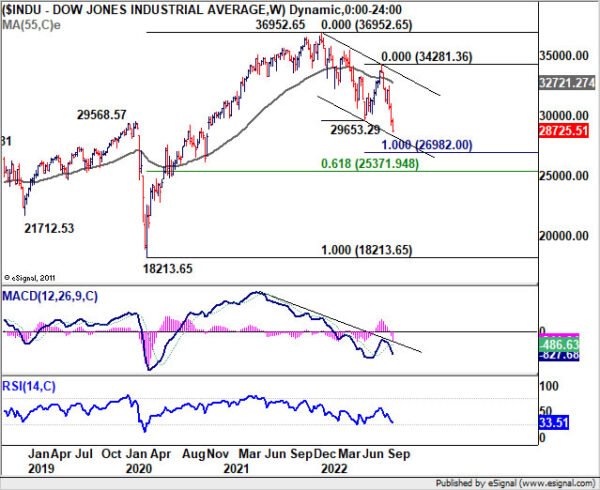 Dollar didn’t benefit much from risk-off sentiment. While Dollar index spiked higher to 114.77, it quickly turned into consolidations and retreated. DXY is pressing both the top of a medium term term channel and the two-decade channel. It has also met a target of 61.8% projection of 94.62 to 109.29 from 104.63 at 113.69. Hence, there is prospect of more consolidation before 114.77 first.

Still, break of 109.29 resistance turned support is needed to confirm topping. Otherwise, further rally will remain in favor after the pull back completes. Firm break of 113.69 will pave the way to 100% projection at 119.30, which is close to 120 psychological level, and 2001 high. 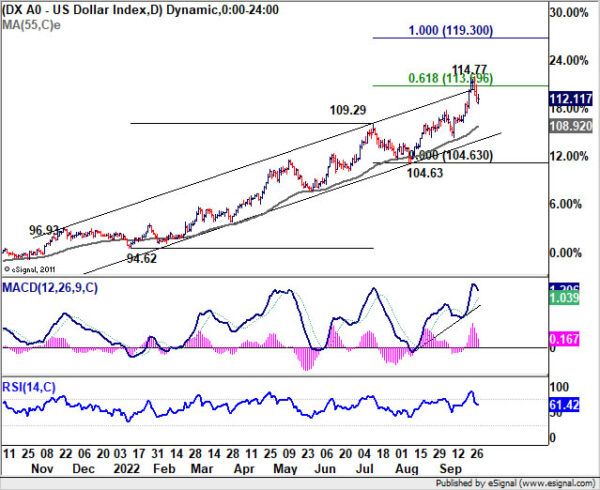 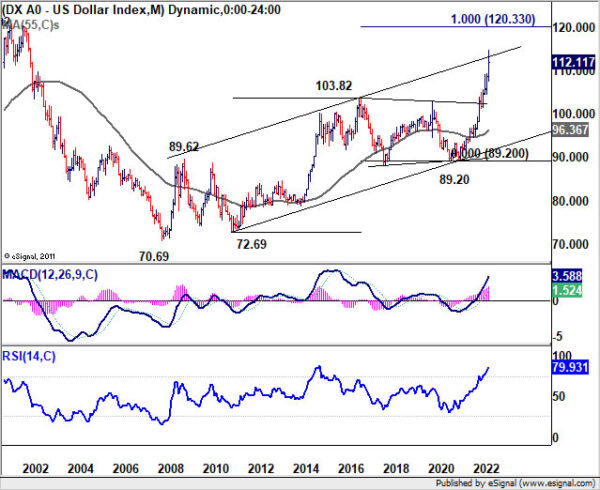 Talking about risk-off sentiment, there is prospect of more downside in commodity-yen crosses, in particular, as USD/JPY could head back towards lower end of range of 140.33/145.89.

AUD/JPY’s correction from 99.32 extended lower last week and near term outlook will stay bearish as long as 94.20 resistance holds. Considering bearish divergence condition in daily MACD, 99.32 should be a medium term top. The question is, whether it’s now in correction to the rise from 78.77, or that from 59.85. 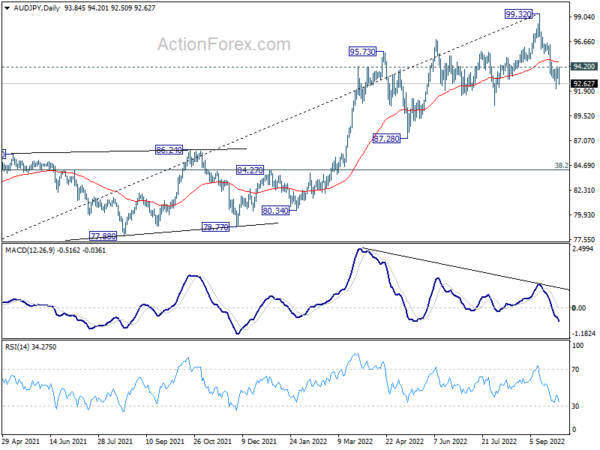 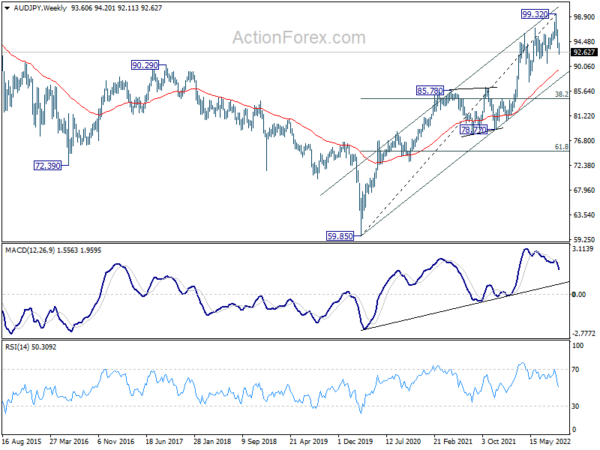 NZD/JPY’s performance was worse and it’s broken 55 week EMA, and pressing channel support. Near term outlook stays bearish as long as 83.02 resistance holds. Sustained break of channel support at 81.06 will indicate that it’s already correcting whole up trend from 59.49. Deeper fall would then be seen to 38.2% retracement of 59.49 to 87.86 at 77.02 before bottoming. 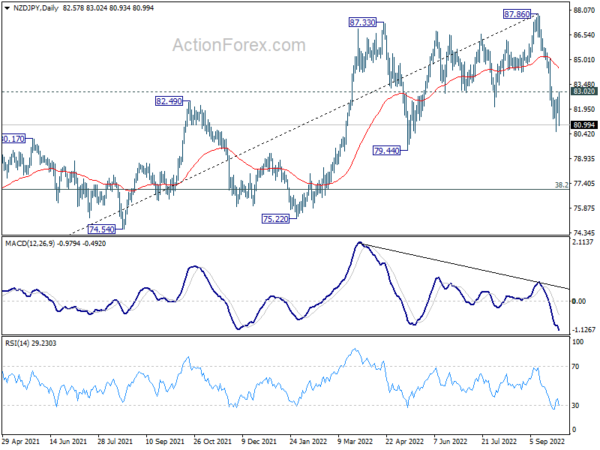 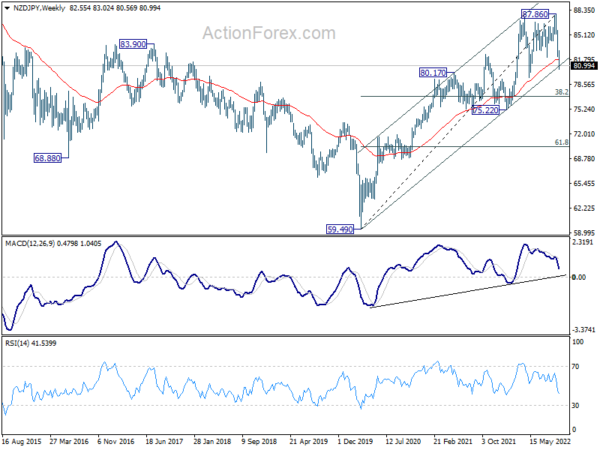 The worst is behind Sterling

On the other hand, the worst appears to be behind for the Pound, after BoE stepped in with targeted and time-limited operation to stabilize gilts. GBP/CAD’s break of 55 day EMA (now at 1.5297) suggests that the down trend from 1.7375 has completed at 1.4069, on bullish convergence condition in daily MACD. 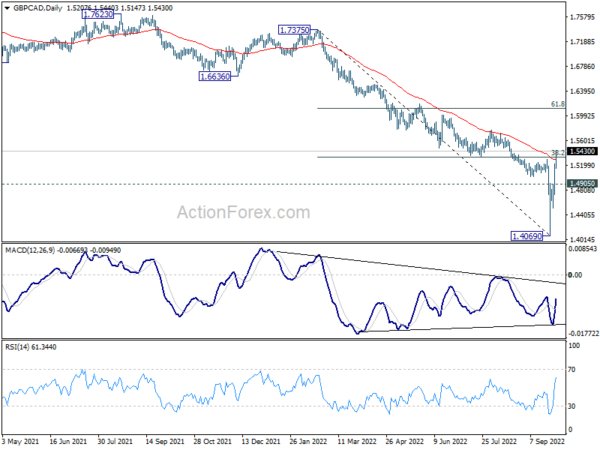 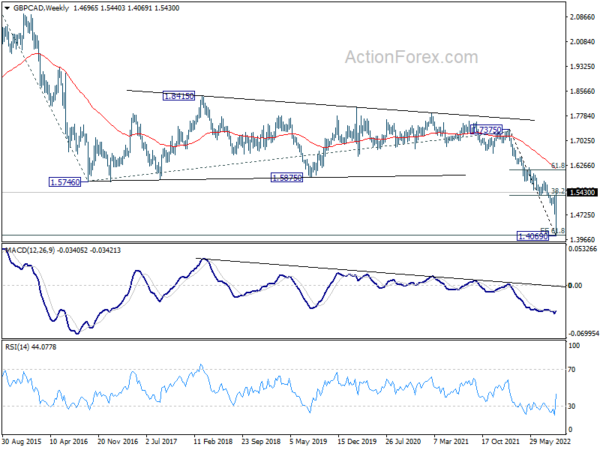 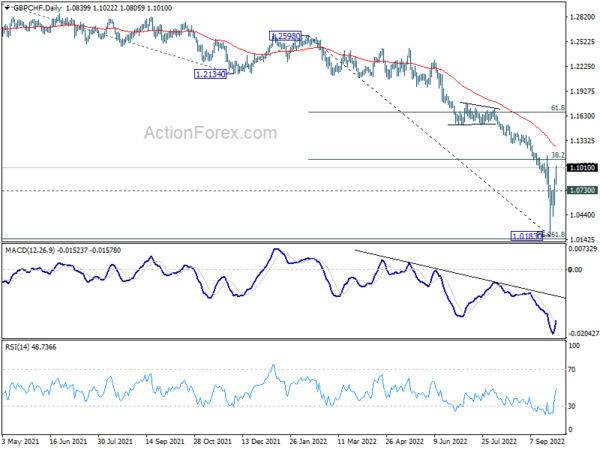 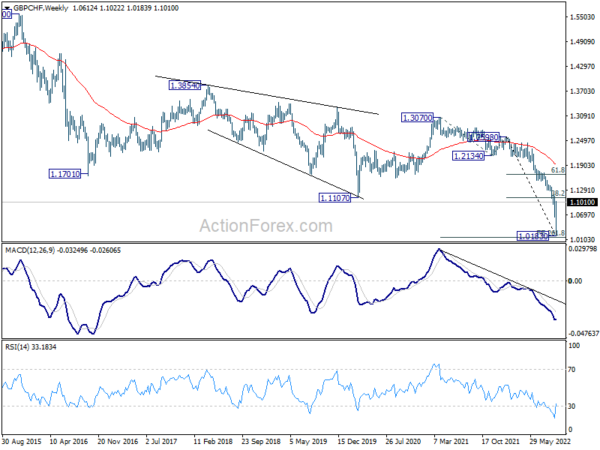 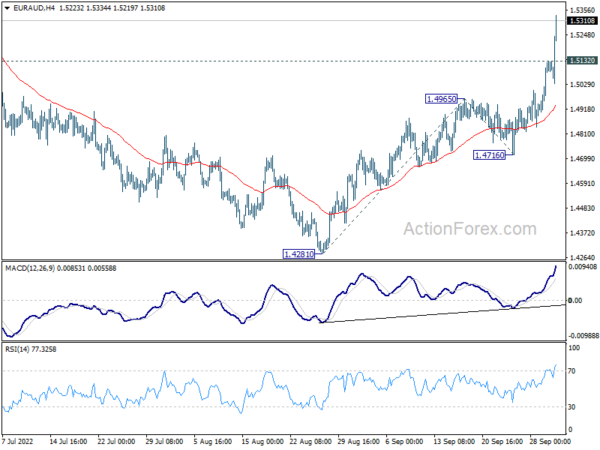 In the bigger picture, current development raises the chance of medium term bottoming at at 1.4281, on bullish convergence condition in daily MACD. Firm break of 1.5396 will bring stronger rally back to 1.6434 key resistance next. Nevertheless, rejection by 1.5396 will maintain medium term bearishness for another fall through 1.4281 at a later stage. 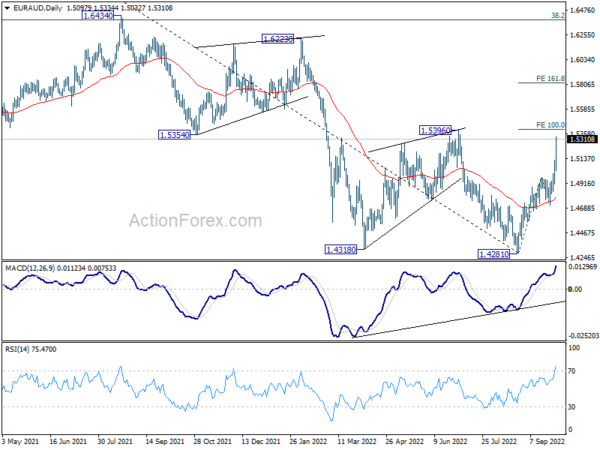 In the longer term picture, as long as 55 month EMA (now at 1.5610) holds, the down trend from 1.9799 (2020 high) could still extend to 1.3624 long term support, and below. However, sustained trading above 55 month EMA will raise the chance that this down trend was over. Further break of 1.6434 resistance should confirm medium term bullish reversal. 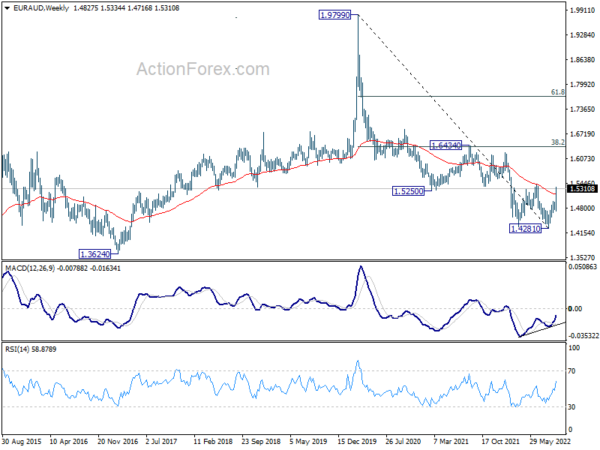 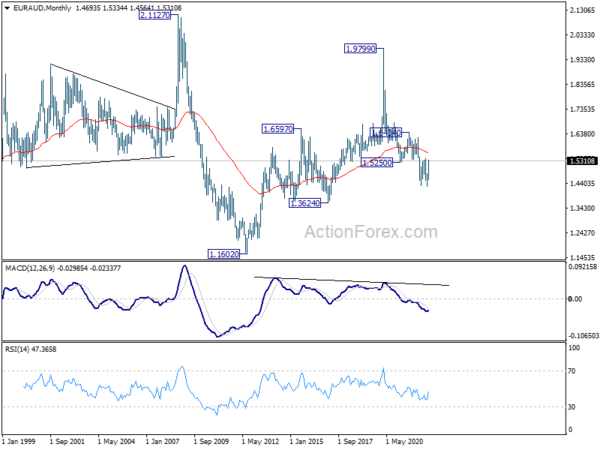