Risk aversion was the dominate theme last week on reverse Trump trade. DJIA suffered the biggest decline this year and lost -317.9 pts or 1.51% to close at 20596.72. S&P 500 dropped -34.27 pts or 1.44% to close at 2343.98. Treasury yield followed with 10 year yield losing -0.101 to close at 2.400. Dollar index dive through 100 handle to close at 99.62, down from prior week’s close at 100.31. In the currency markets, Yen was the biggest winner last week on risk aversion and falling yields. Swiss Franc closely followed as the second strongest major currency. Dollar weakened against European majors and Yen but ended up against Aussie and Canadian Dollar. The two were the weakest major currencies last week. In other markets, Gold extended recent rise from 1194.5 and closed at 1248.5, but kept below resistance at 1264.9. WTI crude oil continued to stay in sideway consolidation between 47/50.

It should be reiterated the rallies in stocks and yields since the US presidential elections last year were based on anticipation of US president Donald Trump’s expansive policies. Those policies include tax cuts as well as infrastructure spending. However, such assumptions were in serious doubt last week ahead of the "vote" on Trump’s heath care act in House. There were talks that Trump couldn’t get enough support even from Republican controlled House to pass the bill to repeal Obamacare. And indeed, the vote was firstly delayed from Thursday to Friday and then pulled because of insufficient support. The result somehow justified the selloff in stocks in the middle of the week.

Markets undecided after the failure

However, it should also be noted that markets were relatively steady on Friday before close. DJIA just lost -0.29% on Friday while S&P 500 lost -0.08%. There were talks that the situation now makes it more difficult for Trump to push through agendas on tax and fiscal stimulus. On the other hand, there were also talks that with healthcare off the table, Trump would expedite the agendas on tax and stimulus. These are two contradictory interpretations on the situations and we’re yet to see which side the markets take. Nonetheless, technically, more downside is expected in stocks, yields as well as the greenback (to be covered later).

A major focus this week is that UK Prime Minister Theresa May will finally trigger Article 50 for Brexit on Wednesday, March 29. Ahead of that, EU leaders gathered in Rome during the weekend to reinforce unity. EU President Donald Tusk said that "Europe as a political entity will either be united, or will not be at all". And, "only a united Europe can be a sovereign Europe." EC President Jean-Claude Juncker said on Friday that UK will need to pay roughly GBP 50b for leaving the Union. But Juncker emphasized that "the British government and parliament took on certain commitments as EU members and they must be honored". And, "this isn’t a punishment or sanctions against the U.K." That is expected to be a key sticking point in the negotiation. Meanwhile, the news on Brexit so far should be well priced in. Thus, while’s it a focus, it may not be that market moving.

The week ahead is not too busy with some important economic data scheduled. But trading could be a bit subdued ahead of quarter end. The economic data to watch include German Ifo on Monday, US trade balance and consumer confidence and Tuesday. US Q4 GDP final on Thursday, Japan CPI UK Q4 GDP final, Eurozone CPI and US PCE on Friday.

Technically, we maintain the view that 21169.11 is a medium term top is DJIA, on bearish divergence condition in daily MACD. Deeper correction is expected to extend to 55 day EMA (now at 20418.56) and below. At this point, we’d expect support from 38.2% retracement from 17883.56 to 21169.11 at 19914.03 to contain downside and bring rebound. On the upside, above 20757.89 will suggests short term bottoming and bring rebound. However, there is little chance for up trend resumption in near term. And correction/consolidation from 21169.11 should extend for a while.

10 year yield’s decline from 2.615 extended lower as expected and took out 55 day EMA. Further fall is still in favor in near term. As noted before, there are two main interpretations of the price actions. Firstly, consolidation from 2.621 is extending with fall from 2.615 as the third leg. Secondly, rise from 2.314 to 2.615 is a failure fifth that ends the whole impulsive rally from 1.336. In both cases, TNX should now head to 55 day EMA at 2.435 and sustained break will target 2.314 and below. But still, in both cases, we’d expect strong support from around 38.2% retracement of 1.336 to 2.621 at 2.130 to contain downside and bring up trend resumption.

To sell AUD/JPY on recovery

Regarding trading strategy, we suggested to sell USD/JPY on recovery to 113.50 to ride on anticipated weakness in Dollar and yeilds. That was directionally correct. But our entry was too conservative as USD/JPY didn’t recover to that point before extend the decline. Our order was not filled. We’re still holding on to the near term bearish view in Dollar and yield. But since USD/JPY is now struggling around key supprot level at 111.13, we’re look for opportunity elsewhere.

We tweeted on March 21 that AUD/JPY’s 6H action bias turned red with a downside breakout. AUD/JPY subsequently dived to as low as 84.34 before recovering mildly.

Looking at the daily chart, bearish divergence condition in MACD indicates that 88.21 is a short term top at least, with possibility of being a medium term top. The structure of the rise from 72.39 to 88.21 looks corrective and such rise could be completed too. Further supporting bearishness is the near term bearish outlook in stocks and yields as mentioned above that should be AUD/JPY negative. Nonetheless, the cross is staying inside the medium term channel which doesn’t really confirm bearishness. 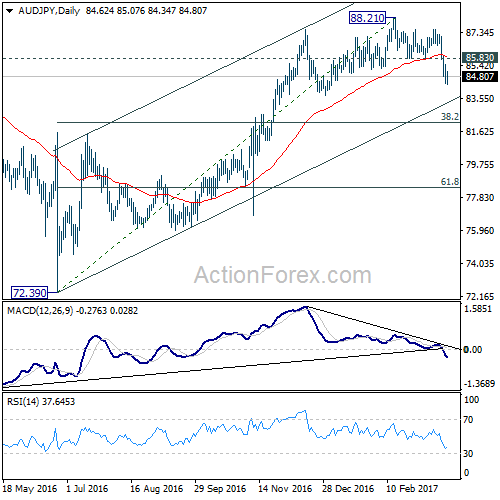 GBP/USD rebounded to as high as 1.2530 last week but lost momentum since then. Overall outlook is unchanged that price actions from 1.1946 are developing into consolidation pattern with 1.2108 as another leg. While such consolidation could extend, the larger down trend is expected to resume at a later stage. 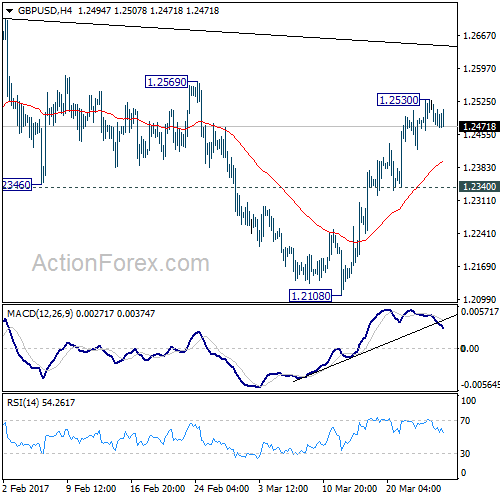 Initial bias in GBP/USD is neutral this week first. On the upside, above 1.2530 will target 1.2705/74 resistance zone. But we’d expect strong resistance from 1.2705/2774 resistance zone to limit upside and bring down trend resumption. On the downside, break of 1.2340 support will turn bias back to the downside for 1.2108 support. Though, sustained break of 1.2774 will extend the rise towards 1.3444 key resistance level. 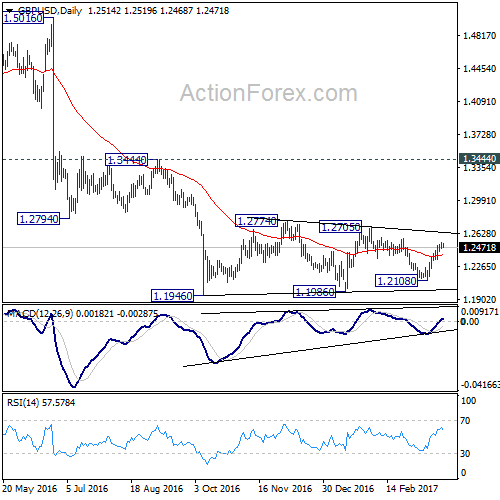 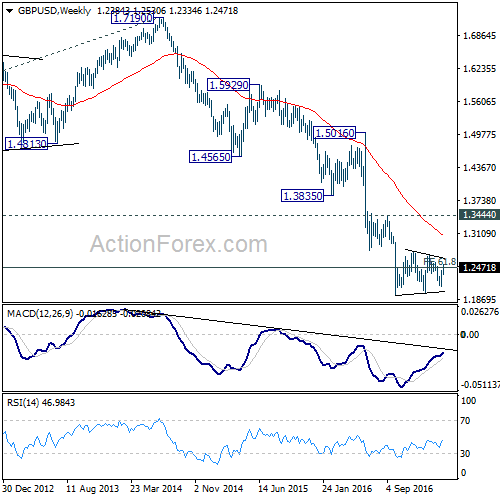 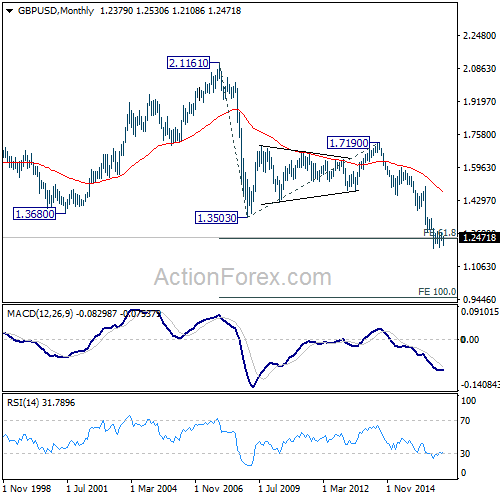