Dollar Bleeds as Trump and Mnuchin Showed Their Hands in Davos

Dollar ended the week broadly and deeply lower as recent selloff intensified. It should be noted again that the current fall is the continuation of the down trend that started back in January 2017, that is, since US President Donald Trump took office. And that happened despite Fed’s three rate hikes last year. DOW gained more than 30% in the period. 10 year yield struggled in most of 2017 but finally surged through a key resistance level at 2.621. Data released during the period showed solid underlying momentum in the economy, except sluggish inflation. Even though Q4 GDP missed expectation, 2.6% annualized growth is still respectable. Fed is more on track for three hikes this year, starting March.

It’s now getting more likely that Dollar’s weakness since last year wasn’t due to uncertainty over Fed’s rate path, slow inflation, nor economic jitters. It’s possibly more due to Trump’s expansive policies that could worsen fiscal position of the US, as well as the protectionist policies that could undermine Dollar’s status as the world’s reserve currency. And it could also be a reaction to fading world leadership under Trump. This is in line with the greenback’s sharp depreciation since the Republican’s tax plan was passed. And more pressure was added on reports that China was considering to diversify from Dollar assets.

The more important thing was revealed in Davos Switzerland last week. Treasury Secretary Steven Mnuchin said in the middle of the week that "a weak dollar is good for us as it relates to trade and opportunities ". That sparkled a free fall in the greenback. Trump later tried to correct that and said Mnuchin’s comments were taken out of context, and Trump himself wants to see a strong dollar. Mnuchin also said on Friday that a strong "long-term dollar" is in the country’s best interests. But the rebound in Dollar was very weak.

One may think that those comments contradict each other. But we believe that, as Mnuchin said during the week, those comments were consistent. Trump and Mnuchin could both prefer to see a strong Dollar in the long term. Who knows? But for the short term, like Mnuchin said, the short term movements are "not a concern of ours at all". That may not necessary mean both Trump and Mnuchin want a weak dollar in short term. But at least, for sure, they won’t mind to have a weak dollar. And that is, they won’t care if their policies would hurt the Dollar in near term. And history also shows that what they have been trying to implement and what they said are already hurting the Dollar. How short is short? Probably not until Trump finishes his current term as it’s considered medium.

So when is Dollar’s weakness going to end? From a pessimistic, political point of view, probably not until mid-term elections.

Sterling the strongest for the month

Sterling remains the strongest major currency for the month. It’s popped up last week after French President Emmanuel Macron offered UK Prime Minister Theresa May the hope of a better financial services deal if May gives ground. Since December, the markets are getting more and more optimistic that there will eventually a Brexit deal and the transition will likely be smooth. But is that enough to push GBP/USD through 1.4? Or from another angle, is GBP/USD above 1.4 sustainable?

Taking a step back, due to post Brexit referendum depreciation in Sterling, inflation in UK surged to above target. BoE’s rate hike last year just brought interest rate back to pre-referendum level. Its hands were tied due to Brexit uncertainties. And it’s now getting more likely, as an ex-MPC member Kristin Forbes warned, the effect of Sterling depreciation has transformed into something structural. And because of that, it’s getting more likely that BoE has fallen well behind the curve due to Brexit uncertainties. And as many central bankers have said, once you’re behind, you need to hike much faster and steeper to catch up. This could be an explanation for GBP/USD above 1.4.

However, we’d also like to point out that EUR/GBP is contained by 0.8688 key support despite last week’s fall. GBP/JPY also showed steep pull back on Friday as medium term momentum stays weak. A lot more is needed to prove the above theory. 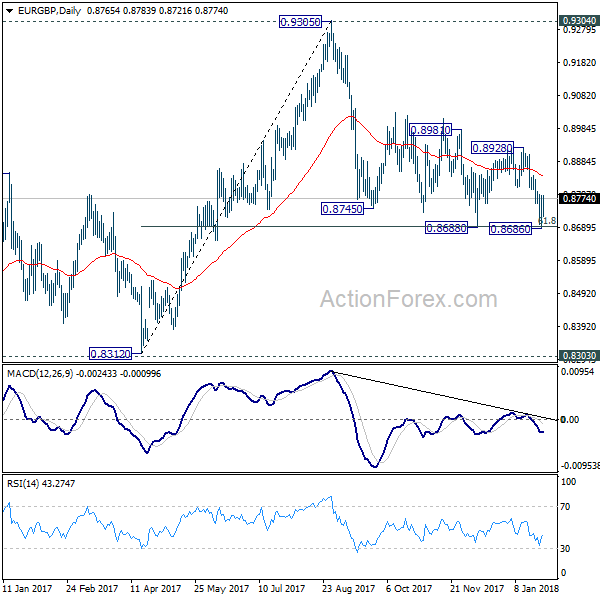 While there were ECB meeting, BoJ meeting, Dollar selloff, Sterling rally last week, it’s the surprised strength in Swiss Franc that caught most of our attentions. The Franc was the strongest one last week and the second strongest for the month. That’s during a time of strong global risk appetite. US indices extended their record runs. DAX also hit record high despite a deep pull back towards the end of the week. Also that comes during a time of rising global yields. So risk aversion is definitely not the reason for Franc’s strength? We believe that markets didn’t listen to SNB Chairman that Franc is still overvalued, and SNB is ready to intervene again. Instead, some could be starting to bet on SNB to start catching up with others on exiting stimulus. It’s much like that strength in Yen and the speculations of BoJ stimulus exit. 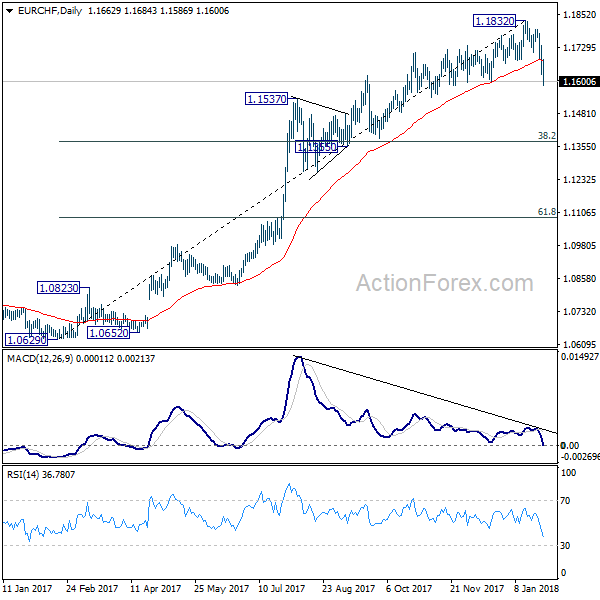 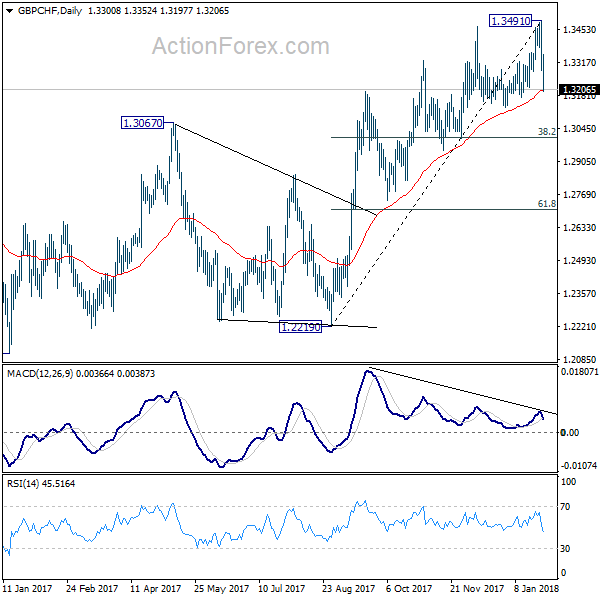 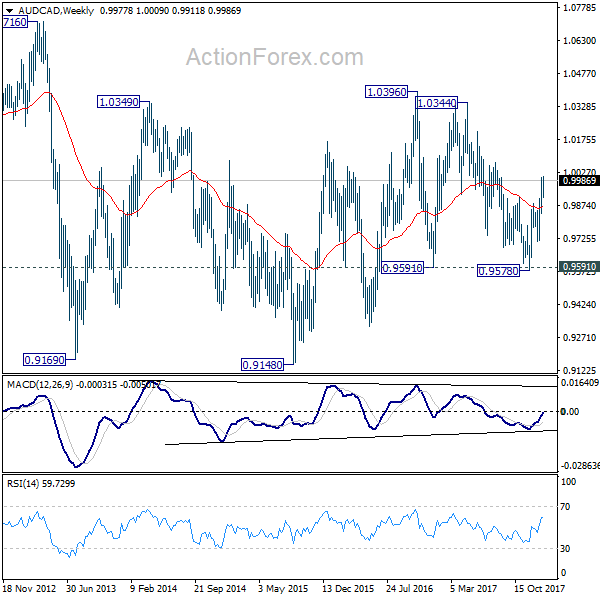 USD/CHF powered through 0.9420 key support level last week and reached as low as 0.9288. Initial bias stays on the downside this week as long as 0.9448 minor resistance holds. Current decline would target next key fibonacci level at 0.9115. But outlook will remains bearish as long as 0.9640 resistance holds.

In the long term picture, the strong break of 0.9420 support and downside acceleration turns the long term outlook rather bearish. Corrective rebound from 0.7065 (2011 low) could have already completed at 1.0342. 0.8698 support will be a key level to watch. Sustained break there could bring retest of 0.7065. 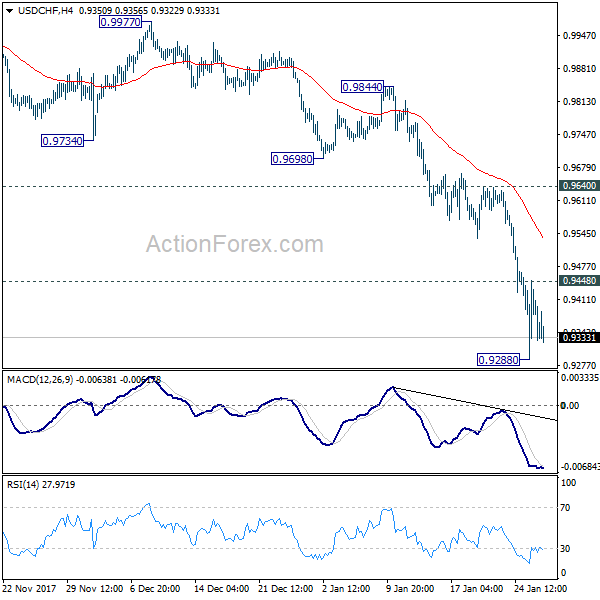 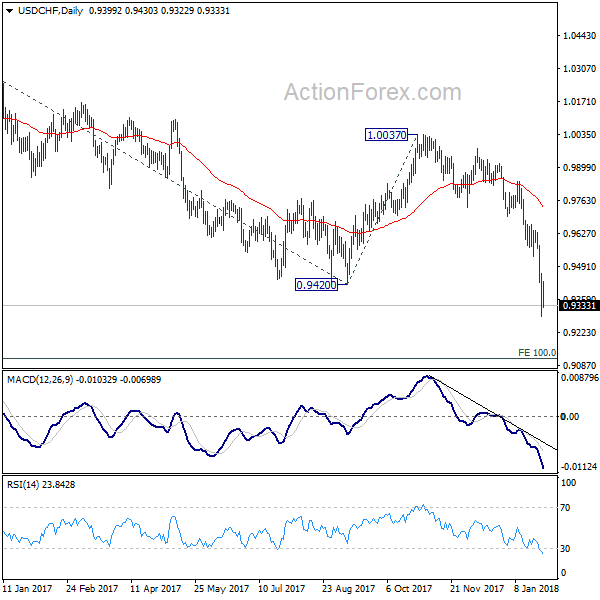 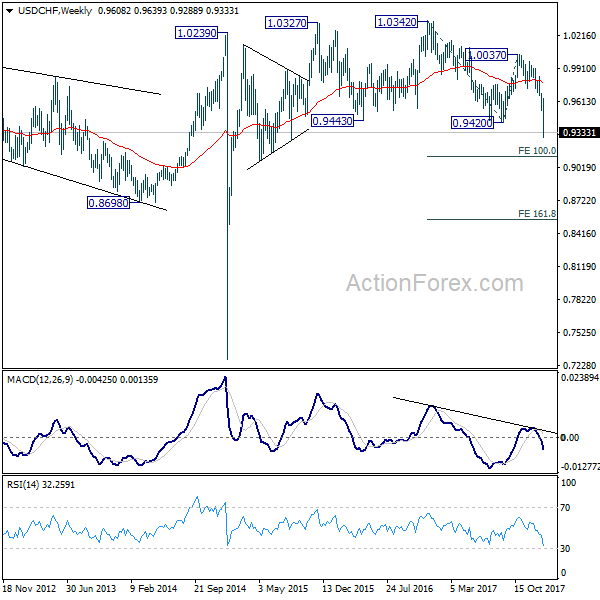 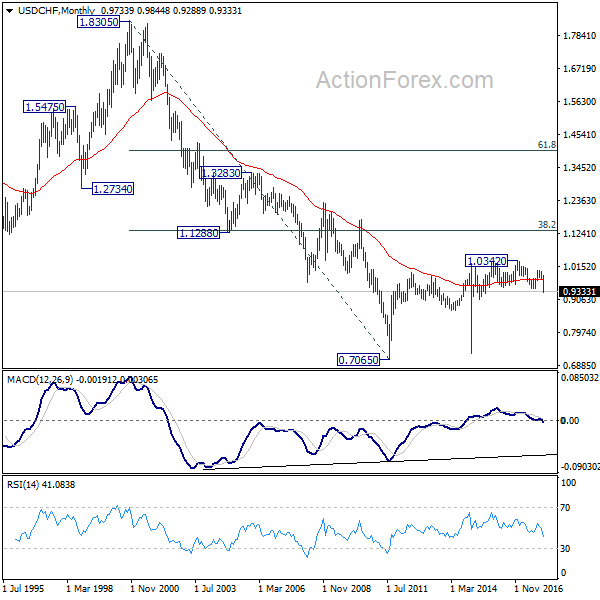