Dollar ended last week as the strongest major currency Fed communications solidified the case for three hikes this year. Nonetheless, as pointed out a few times, the greenback was held below key near term resistance levels against others and there is no change in its bearish outlook yet. Stocks continued to stabilize in tight rang and Friday’s rally in DOW argues that the rebound from the spike low earlier this month might be ready to resume soon. 10 year yield attempted to rise but felt heavy ahead of psychological level at 3%. Elsewhere in the currency markets, Sterling and Yen were the second and third strongest for the week. Kiwi, Euro, Aussie and Swissy were the weakest.

Case for three Fed hikes solidified, but not more

Fed’s monetary policy report released on Friday was seen as a prelude to new Fed Chair Jerome Powell’s semi-annual testimony to Congress next week. The report delivered nothing new to the markets, which suggests that Powell is unlikely to tell us anything new neither. Unemployment rate at 4.1% showed the economy was near to or even a bit beyond full employment. Inflation is expected to be around or a little below the 2% target throughout 2018.

Released earlier in the week, minutes of the January 30-31 FOMC meeting showed "a majority of participants noted that a stronger outlook for economic growth raised the likelihood that further gradual policy firming would be appropriate. Also, there are "upside risks" to growth because of the tax cuts. Meanwhile, "almost all participants" expected inflation to move up to the 2% target over the "medium term".

All in all, the releases solidify the case for Fed to hike three times this year. Fed fund futures are pricing in 83.1% change on a 25bps hike in March. However, while there are speculations Fed could raise interest rates one more time, neither the minutes nor the report give any indication on it. That’s a key for the loss in momentum in 10 year yield last week, as well as the rebound in stocks on Friday.

We’d mentioned a couple of times last week that while Dollar was firm, the rebound is seen as a corrective move at best for the moment. Major dollar pairs were kept in recently established range and there is no confirmation of trend reversal yet. Dollar index could be drawing support from 50% retracement of 72.69 (2011 low) to 103.82 (2017 high) at 88.25. But so far, it’s limited below 91.01 support turned resistance, as well as falling 55 day EMA (now at 90.80). Further decline is still expected to next fibonacci level at 61.8% retracement at 84.58 in medium term. Nonetheless, firm break of 91.01 will be the first signal of trend reversal and will turn focus back to 95.15 key resistance for confirmation.

Euro ended lower on a couple of factors

Euro, on the other hand, ended as the second weakest one last week on a couple of factors. Firstly, data released argue that growth in Eurozone could be past its acceleration phase. German ZEW dropped from 20.4 to 17.8 in February. Ifo business climate dropped from 117.6 to 115.4. Eurozone PMI manufacturing dropped from 59.6 to 58.5. PMI services dropped from 58.0 to 56.7. Make no mistakes that these were still solid numbers. But the mild cooling of the economy would give fewer reasons for ECB to end its stimulus program earlier.

Talking about ECB, minutes of the January meeting were a disappointment to Euro bulls. The minutes showed that "changes in communication were generally seen to be premature at this juncture, as inflation developments remained subdued despite the robust pace of economic expansion." The central bank is not even ready to drop the option to extend the asset purchase program after it expires in September.

Some cited political uncertainties as another factor in Euro’s weakness. In particular, two important events will fall on next Sunday March 4. Firstly, Italy will hold the national election. Political fragmentation, just like other parts of Europe, could lead to indecisive results and a hung parliament. Secondly, over 450k German SPD members are voting on the grand coalition with Chancellor Merkel’s CDU/CSU. The results will also be released on March 4.

In our view, the technical development in EUR/USD was probably the most important factor among all. It’s pressing the key long term fibonacci level at 38.2% retracement of 1.6039 (2008 high) to 1.0339 (2017 low) at 1.2516. Fresh inspiration is needed to push the pair through this key level decisively. Or, Euro could suffer a deeper pull back when the bulls start to get impatient. 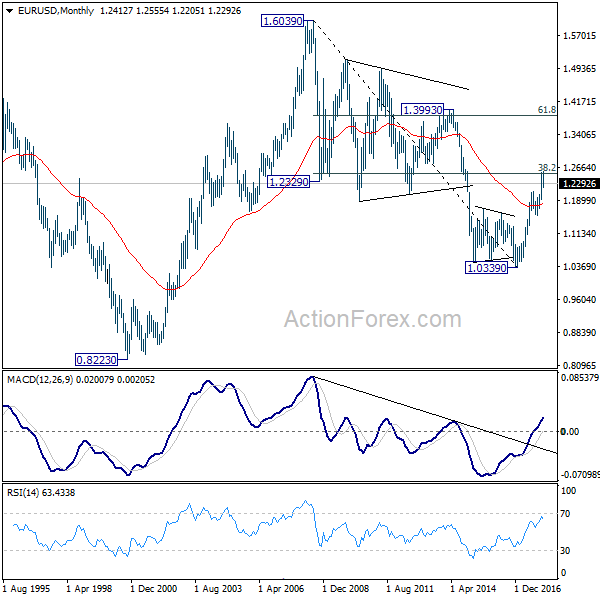 Our GBP/CHF short (sold at 1.3105) was stopped out at break-even last week as the cross recovered to 1.3120. The forex markets are basically in consolidation mode and there is no clear trend for the near term yet. We’ll keep our hands off during the last week of February and reassess the opportunities next week.

EUR/JPY dropped to as log as 130.29 last week. The development should now confirm medium term topping at 137.49, on bearish divergence condition in daily MACD. Initial bias is remains on the downside for 126.61 medium term fibonacci level next. On the upside, break of 133.05 resistance is needed to confirm short term bottoming. Otherwise, outlook will remain bearish in case of recovery.

In the bigger picture, current development argues that rise from 109.03 has completed at 137.49, on bearish divergence condition in weekly MACD. Deeper fall should be seen to 38.2% retracement of 109.03 to 137.49 at 126.61 first. On the upside, break of 137.49 is needed to confirm medium term rise resumption. Otherwise, risk will now stay on the downside even in case of strong rebound. 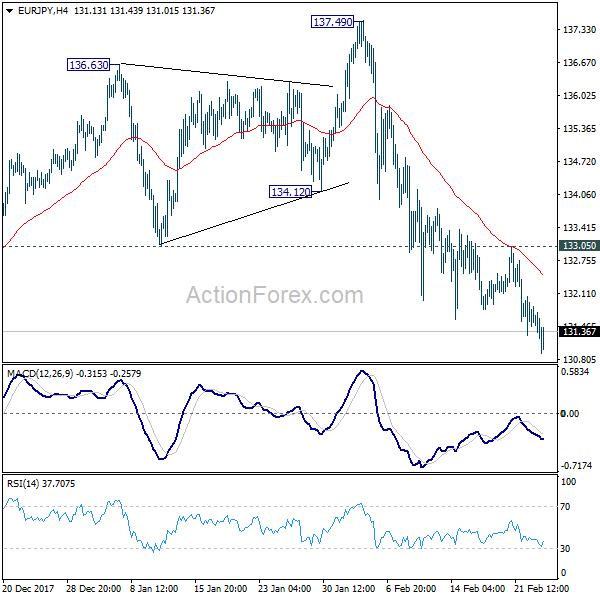 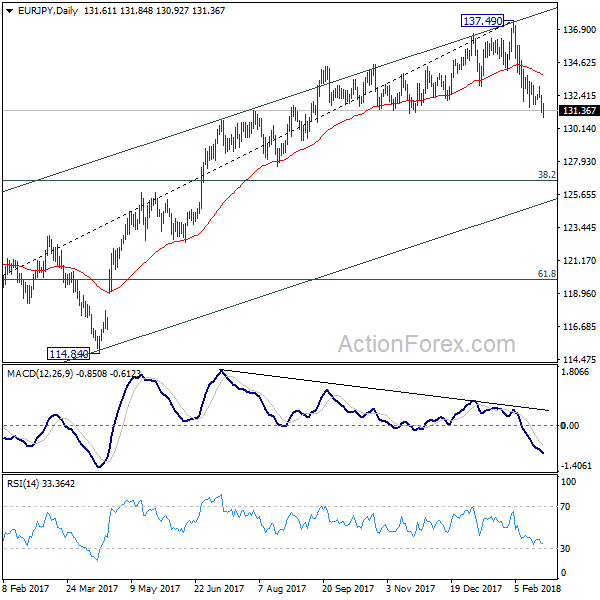 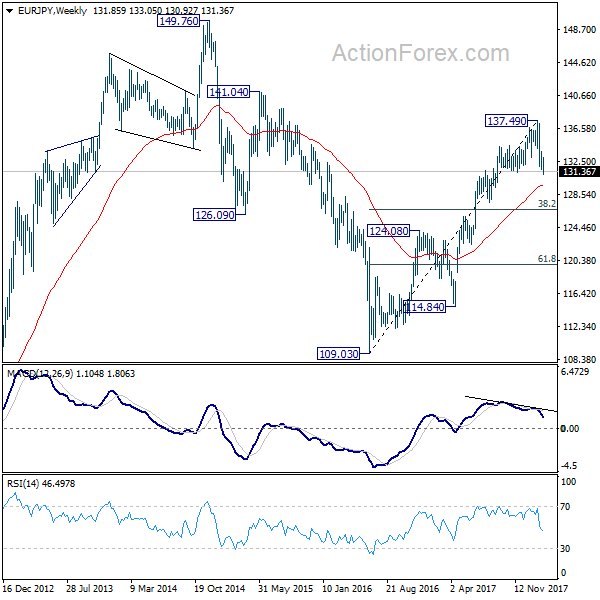 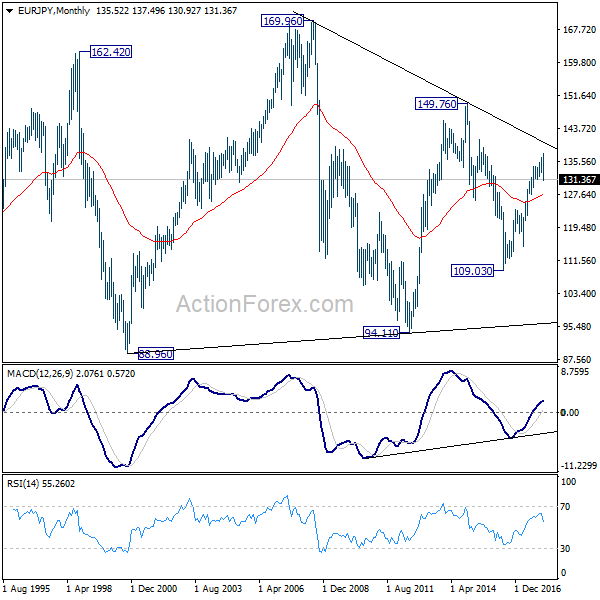