Dollar Surged and Yield Rebounded after a Dramatic Week of Negative News, More Upside ahead

Dollar Surged and Yield Rebounded after a Dramatic Week of Negative News, More Upside ahead

"The market is always right". That’s by no means saying that the market is efficient, that’s a topic for the academics. But, the market always move with certain underlying forces. We may or may not always understand why stocks, yields, currencies commodities move that way. It doesn’t matter. And indeed, the voice of the market is usually the loudest when it does something that doesn’t make sense. It’s up to us to hear it or ignore it. And, reading news is not about reading the news but the reactions to the news. It’s our choice to see the reactions, or just to criticize the reactions.

So coming back to "reality", we’ve got a very dramatic week, especially towards the end. And news were indeed rather negative to Dollar. US launched military strike in Syria and relationship with Russia tensed up after that. Russia even condemned that US is just "one step away" from war. The highly anticipated summit between US President Donald Trump and Chinese President Xi Jinping ended with "very frank, very candid" discussions. But then? Nothing more. Non-farm payroll grew a mere 98k in March even though unemployment rate dropped to 10 year low.

One of the explanations could be found in the jump in oil price on geopolitical risks. Energy stocks’ rally somewhat offset losses in financial stocks. And technically, WTI crude oil maintained a higher high, higher low pattern and is back above 55 day EMA. It should now be heading back to 55.24 resistance and above to extend the larger up trend. And with that, upside pressure on headline inflation could be revived that would eventually pass through to underlying inflation.

The rebound in TNX was also accompanied by strong rally in Dollar index. 55 day EMA is firmly taken out. And the development now favors the case that pull back from 103.82 is already completed with three waves down to 98.85. Focus will now be on 102.26 resistance this week and break there could pave the way through 103.82 high to resume the larger up trend.

Overall, with bearish dollar news in the back ground, the bullish development in Dollar and yields suggest that the greenback could be ready for a sustainable rise, at least in near term. We’ll closely monitor the developments. But for now, we’ll be looking at Dollar long opportunities.

Regarding trading strategy (refer to last week’s report), we sold AUD/JPY at weekly open at 84.90 last week. The bearish view proved to be correct so far as the cross dived to as low as 82.79 before closing at 83.26. Technically, we still believe that AUD/JPY’s rebound from 72.39 has completed at 88.21. And deeper fall would be seen to 38.2% retracement of 72.39 to 88.21 at 82.16 and below. However, considering the possibility of reversal in treasury yield, a rebound in USD/JPY could pull other yen crosses higher. Therefore, we’ll just close the AUD/JPY short position at market this week to capture the profits first. 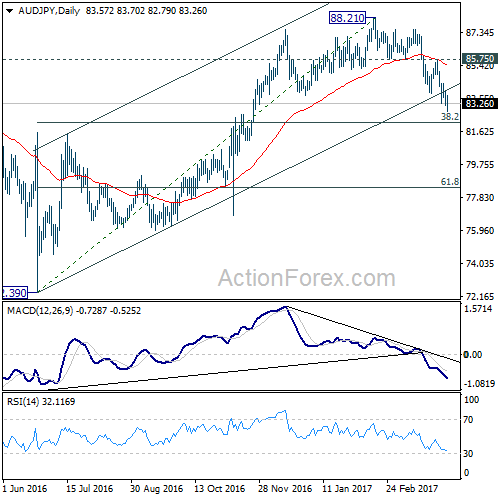 To close EUR/GBP short too

Also, we sold EUR/GBP at 0.8550 (stop at 0.8610) as the cross recovered. The cross engaged in sideway trading most of the week. Technically speaking, we’re favoring the case that consolidation pattern from 0.8303 is completed at 0.8786 already. But we cannot ruled out the case of one more rising leg before fall from 0.9304 resumes. Also, we’d anticipate market’s focus to return to Dollar strength this week. And, EUR/GBP would possibly just stay sideway, with prospect of a stronger rise. Hence, we’ll close the position at market when the week opens and look for opportunity elsewhere. 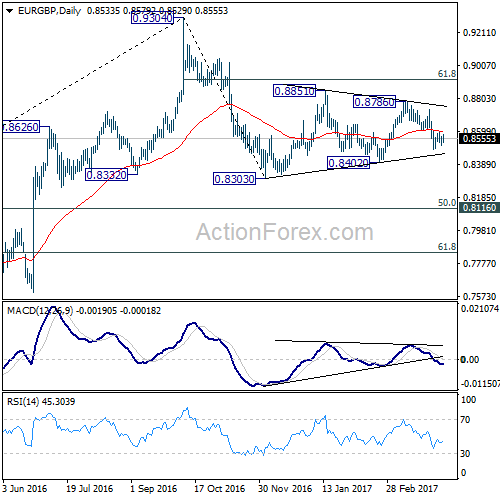 EUR/USD’s fall from 1.0905 extended to as low as 1.0580 last week. The development affirmed the case that corrective rise from 1.0339 is finished after being rejected by 55 week EMA. And, the larger down trend is likely ready to resume. Deeper fall is expected in near term and break of 1.0494 support should confirm this bearish case. 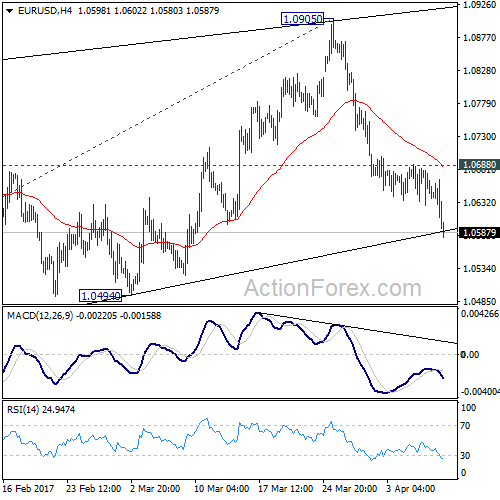 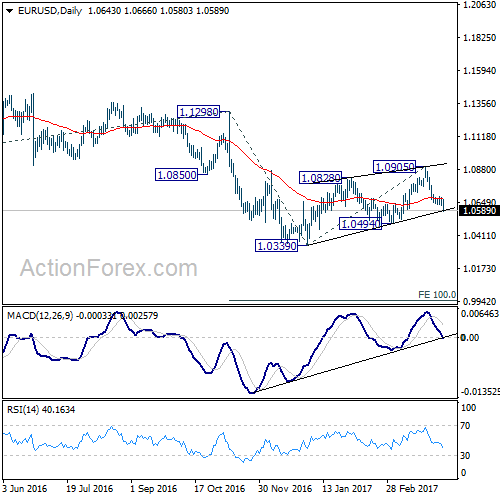 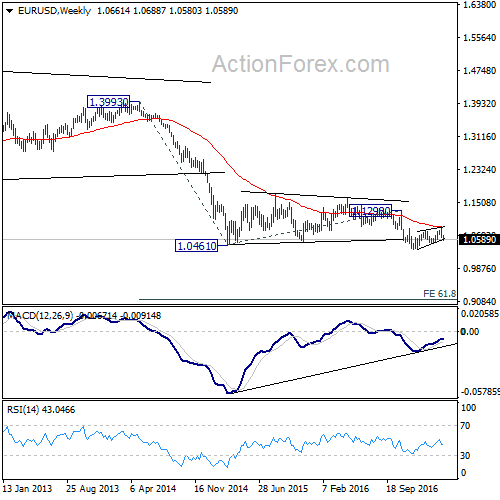 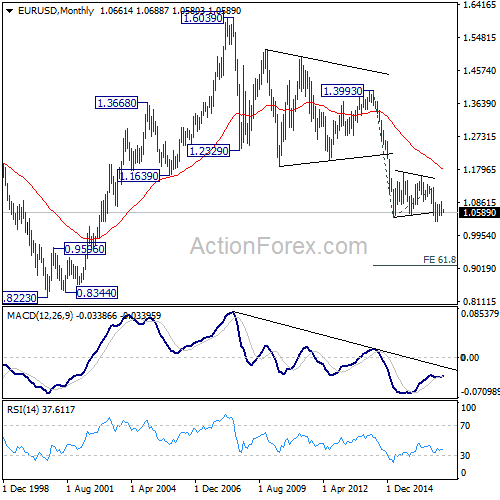