While there are many different chart patterns, one of the most commonly occurring pattern is the wedge pattern. Classified into a rising wedge or a falling wedge, these patterns are formed after a strong rally or a decline in price. They usually occur at the end of the strong move and signals exhaustion in the price momentum. Trading the wedge pattern is a typically counter trend as a breakout from the pattern could either signal a correction or a potential change in trend itself.

The picture below illustrates a rising and a falling wedge pattern at its simplest form. 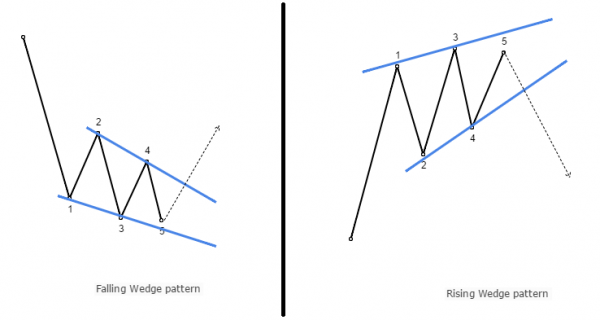 Characteristics of a Wedge pattern

Note: When trading with stocks, the breakout from the wedge pattern is usually confirmed by higher volume. The following two charts illustrate this point. 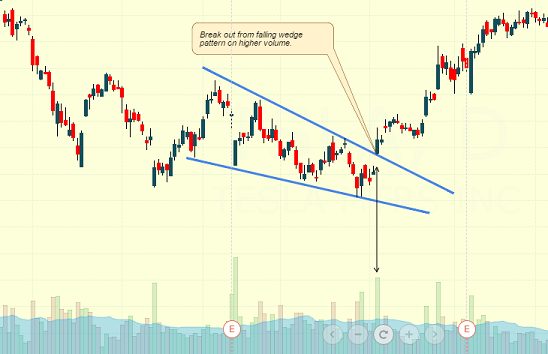 In the next chart, a rising wedge pattern is formed after a steady uptrend. After a series of higher highs and higher lows, price starts to consolidate into a wedge pattern. The breakout is confirmed by the higher volume resulting in prices moving lower.

How to set targets in a wedge pattern?

The wedge pattern can be generally customized in terms of trading the pattern breakout with traders devising their own rules. There are two most widely accepted rules in setting targets in the wedge pattern.

As with most chart patterns and breakout methods, prices can retrace the breakout level before resuming its direction. The wedge pattern is no different either. For stops, the point D, which is the highest point in a rising wedge and the lowest point in the falling wedge is used at a level for set the stop losses.

The following chart for EURUSD showed a rising wedge pattern that was formed with prices moving steadily higher.

The next chart below shows a falling wedge pattern, identified on the 30-minute chart time frame. 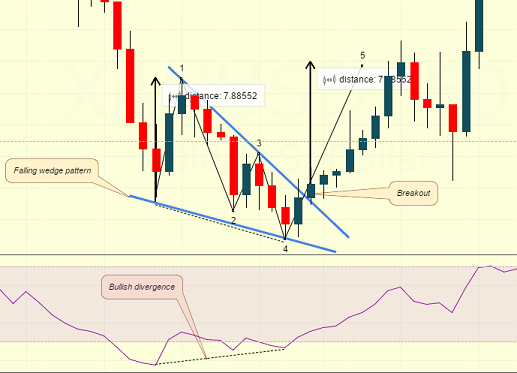 Here, instead of the Awesome Oscillator we make use of the RSI. Following the consolidation pattern and noticing the bullish divergence, a long set-up is taken on the breakout from the falling wedge pattern with the target set to the same distance as from point 0 – 1.