Despite the general perception that the German election would be a boring game, the outcomes contain several surprises and should drag the process of deeper EU integration. Angela Merkel’s CDU and its sister party CSU have secured 246, out of 709 seats in the new Bundestag, marking a decline of -65 seats from the 2013 term. With CDU remaining the biggest party, Merkel will no doubt be the Chancellor for a fourth term. However, it is challenging for her to form a coalition government this time. Back in 2013, the CDU/CSU formed a Grand Coalition government, with SPD as its junior partner. This time, with SPD’s number of seats sharply falling to 153 (down -40 seats from 2014), the party has pledged that it would head into opposition this time. Indeed, the SPD during the election period had been complaining about the loss of popularity after forming coalition with CDU/CSU. Yet, Merkel has asked Martin Schulz, SPD’s leader, to re-think. The Grand Coalition is expected to be the best for the financial markets, providing the least uncertainty and most favorable for deeper EU integration. 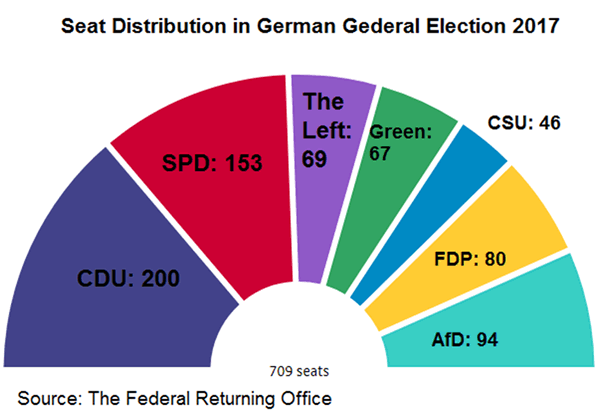 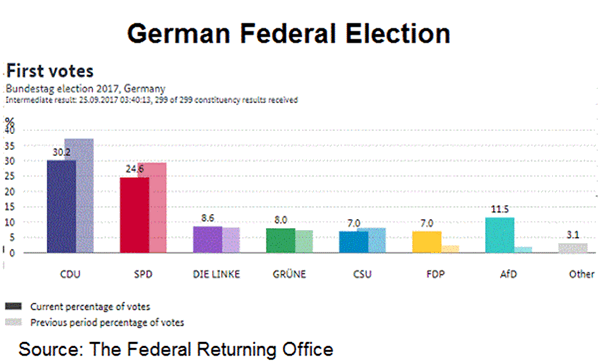 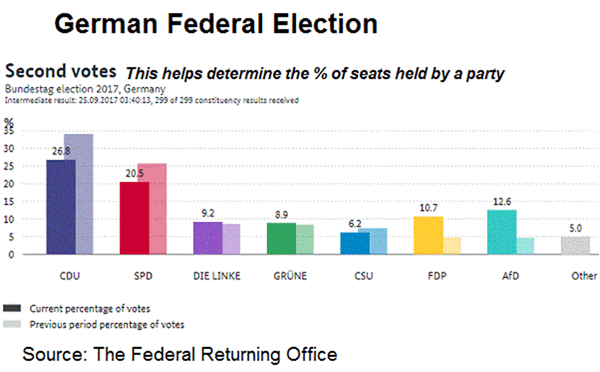 Besides Grand Coalition, another possibility is Jamaica – CDU/CSU + FDP + Greens. While this combination appears the most likely after SPD refuses to a re-run, the hurdles are high.CDU/CSU has highly preferred to work with FDP given the similarities in ideologies and platforms. Yet, FDP and Green are traditional rivalries. The two parties have different very different views on various issues, ranging from labor and social policy, to immigration policy; from fiscal policy to EU integration. There are few cooperation between the two parties in local level, let alone federal level. For economic and EU integration prospects of different coalition combinations: please visit: https://www.actionforex.com/action-insight/special-topics/44648-german-election-not-as-boring-as-you-think

The biggest surprise is undoubtedly the surge of AfD. The far-right party has gained 94 seats with a record high 12.6% of votes. The party has pledged to be spread its anti-immigration, anti-euro ideologies in the parliamentary speeches. Should it become the biggest opposition party (in case of Grand Coalition), AfD would chair the budget committee and impede the passage of EU integration bills. AfD’s surge has strong implications for CDU. Surveys suggest that over 20% of people voted for AfD this time had voted for CDU in 2013. This might lead some CDU legislators to take a more hawkish stance on EU and immigration issues in the future.

In short, the new government, be it the Jamaica or a re-run of the Grand Coalition, would merely be a knife-edge majority, making it more difficult to implement significant reforms, both in domestic policies and EU integration. We foresee a challenging four years for Merkel, whom SPD’s Schulz described as the ‘biggest loser’