Coronavirus is posing exceptionally large challenges for Switzerland, both socially and economically. Uncertainty has risen considerably worldwide, and the outlook both for the global economy and for Switzerland has worsened markedly. The Swiss franc is even more highly valued, and the world’s financial markets are under strong pressure.

In these exceptional circumstances, the SNB’s expansionary monetary policy is more necessary than ever for ensuring appropriate monetary conditions in Switzerland. It is keeping the SNB policy rate and interest on sight deposits at the SNB at −0.75%. The SNB is intervening more strongly in the foreign exchange market to contribute to the stabilisation of the situation. In so doing, it takes the overall exchange rate situation into account. Negative interest and interventions are necessary to reduce the attractiveness of Swiss franc investments and thus counteract the upward pressure on the currency.

The SNB is also working closely with the Federal Council with the aim of providing the best possible support to the economy.

The Swiss financial system has sufficient liquidity. The SNB will take additional steps to ensure liquidity as necessary. It is also providing liquidity as part of the extended swap arrangements with other central banks, particularly in US dollars.

Banks’ actions will play a key role in economic developments in Switzerland, especially in the near term. To strengthen the banks in this role, the SNB is raising the exemption threshold as of 1 April 2020, thus reducing the negative interest burden on the banking system. The threshold factor will increase from 25 to 30.

The banks have built up substantial capital and liquidity buffers in recent years. They are thus also equipped for difficult situations affecting the economy as a whole. With a view to further increasing the banks’ room for manoeuvre, the SNB is examining whether a relaxation of the countercyclical capital buffer would be possible despite the risks on the mortgage and real estate markets.

In the current situation, it is extremely difficult to assess the economic outlook, and the forecasts are subject to an unusually high level of uncertainty. This is the case for growth and inflation alike.

The new conditional inflation forecast is lower than in December. This is primarily due to lower oil prices, significantly weaker growth prospects and the stronger Swiss franc. The forecast for the current year is slightly in negative territory at −0.3%. The inflation rate is likely to be slightly positive in 2021 at 0.3%, before rising to 0.7% in 2022. The conditional inflation forecast is based on the assumption that the SNB policy rate remains at –0.75% over the entire forecast horizon.

The global economic outlook has changed abruptly in recent weeks. At the turn of the year, various surveys had initially pointed to an improvement in the world economy. The easing in international trade tensions fostered the expectation of a gradual pick-up in economic activity worldwide in the coming months. However, the global spread of coronavirus and the measures necessary to contain the pandemic have interrupted this positive development and will result in significant economic declines.

In China, economic activity was already contracting strongly in broad areas of the country from January. Since mid-February, coronavirus has rapidly spread across the world, and in particular also to Switzerland’s key trading partners in Europe and North America. Restrictions on public movement, interruptions in production, supply chain disruptions and curbed household consumption will weigh heavily on economic activity in all affected countries.

In this environment, the global economic outlook is extremely uncertain. Pronounced economic declines are to be expected in the first half of 2020. The speed with which the global economy subsequently recovers will hinge on the combined impact of healthcare, fiscal and monetary policy measures.

Against the backdrop of the spread of coronavirus, the short-term outlook has also worsened markedly for Switzerland. In December, the SNB had still expected growth of between 1.5% and 2% for 2020. However, the downturn in the international economy and the measures to contain the virus will lead to a marked decline in economic activity in Switzerland as well in the first half of the year. As soon as the national and international containment measures can be lifted, economic activity is likely to return to normal, albeit gradually. Even under this assumption, however, GDP growth is likely to be negative for the year as a whole. The return to normality from the second half of the year onwards could thereafter be reflected in strong positive growth in 2021. 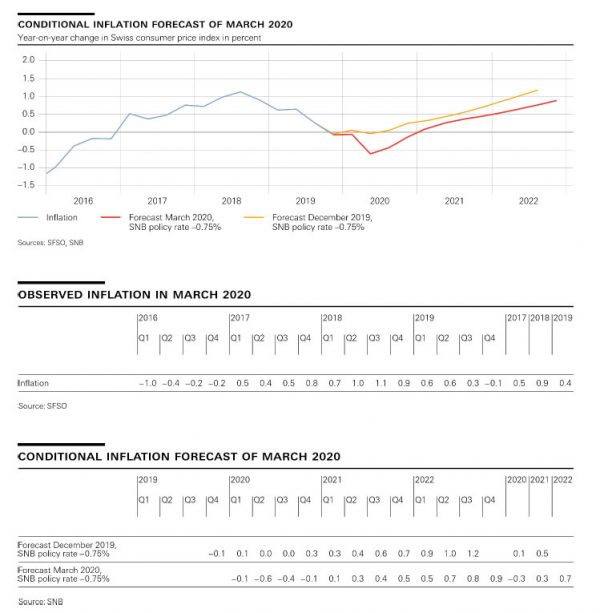