The coronavirus pandemic and the measures implemented to contain it have led to a severe downturn in economic activity and a decline in inflation both in Switzerland and abroad. The SNB’s expansionary monetary policy remains necessary to ensure appropriate monetary conditions in Switzerland.

The SNB is keeping the SNB policy rate and interest on sight deposits at the SNB at −0.75%, and in light of the highly valued Swiss franc it remains willing to intervene more strongly in the foreign exchange market. In so doing, it takes the overall exchange rate situation into account. Furthermore, under the SNB COVID-19 refinancing facility (CRF), it is providing the banking system with additional liquidity and thus supporting the supply of credit to the economy at favourable terms. The SNB’s expansionary monetary policy helps stabilise economic activity and price developments in Switzerland.

In the current situation, inflation and growth forecasts are subject to unusually high uncertainty. The new conditional inflation forecast is lower than in March. This is primarily due to the significantly weaker growth prospects and lower oil prices. The forecast for the current year is negative (−0.7%). The inflation rate is likely to rise in 2021, but still be slightly negative (−0.2%), before returning to positive territory in 2022 (0.2%). The conditional inflation forecast is based on the assumption that the SNB policy rate remains at –0.75% over the entire forecast horizon.

The coronavirus pandemic has pushed the global economy into a sharp recession. The measures to contain the virus have massively restricted both production and consumption, which already led to a severe economic downturn in many countries in the first quarter of 2020. The decline in global GDP is likely to be even more pronounced in the second quarter. Unemployment has increased in many countries, with short-time work schemes having prevented a stronger rise in Europe.

In light of the declining infection numbers, many economies have in the meantime begun to ease their containment measures. The first indications are that economic activity has since picked up. Further loosening of the measures is likely to contribute to a significant economic recovery in the third quarter.

In its baseline scenario for the global economy, the SNB anticipates that further waves of infection will be successfully prevented. Nevertheless, as regards both consumption and investment, demand is likely to remain moderate for the time being. Global production capacity will probably be underutilised for some time yet, and inflation is likely to remain modest in most countries.

This baseline scenario is subject to a high level of uncertainty on the upside and downside alike. On the one hand, further waves of infection or trade tensions could additionally impair economic activity. On the other, the significant monetary policy and fiscal policy measures introduced in many countries could support the recovery more strongly than expected.

The Swiss economy is also in a sharp recession. Correspondingly, most economic indicators have deteriorated drastically in recent months. Short-time working has reached unprecedented levels, unemployment has risen rapidly, and consumer sentiment has fallen to a record low. Although the downturn set in only in March, GDP was already 2.6% lower in Q1 2020 than in the previous quarter. The low point in terms of economic activity came in April. The decline in GDP is therefore likely to be even stronger in the second quarter.

Various signals indicate that economic activity has picked up again somewhat since May with the loosening of containment measures. This positive development is likely to continue in the coming months. However, the SNB anticipates that, as abroad, there will be only a partial recovery for the time being, and GDP will not return quickly to its pre-crisis level. Overall, GDP is likely to contract by around 6% this year. This would be the strongest decline since the oil crisis in the 1970s. The economic revival in the second half of the year is likely to be reflected in clearly positive growth in 2021.

Given the fall in revenues experienced by many companies, ensuring the appropriate supply of bridging loans to the economy is crucial for a rapid recovery. Bridging loans can prevent liquidity shortfalls caused by the crisis from leading to insolvencies. To enable banks to offer such loans quickly and at favourable terms, the SNB has provided them with around CHF 10 billion in liquidity at the SNB policy rate of −0.75% since the launch of the CRF. The banks receive this liquidity with COVID-19 loans guaranteed by the federal government or the cantons serving as collateral. The federal government, the SNB and the banks have thus ensured an appropriate supply of credit and liquidity to businesses in Switzerland. 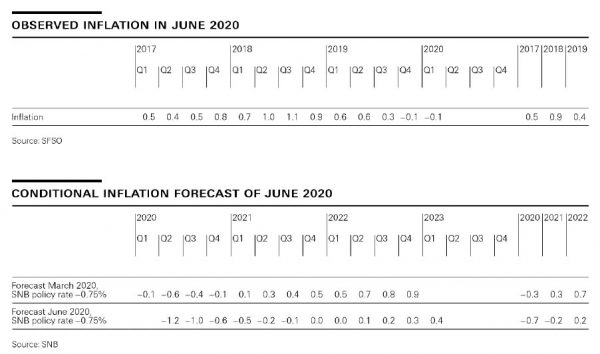