FOREX: The US dollar index – which tracks the greenback’s performance against a basket of six major currencies – is lower on Friday, though by less than 0.1%. The index closed lower on Thursday, after touching its best levels in 11 months. In the UK, the pound soared after the BoE kept rates unchanged, but adopted a more hawkish tone, stoking expectations for a rate increase at the August meeting.

STOCKS: US markets closed lower on Thursday, amid concerns the recent trade spat is weighing on business sentiment. Also, e-commerce stocks took a hit after the US Supreme Court ruled that states can force online retailers to collect sales taxes, eroding an advantage that titans like Amazon (-1.13%) and Ebay (-3.18%) had enjoyed so far. As such, the tech-heavy Nasdaq Composite underperformed, declining by 0.88%, while the Dow Jones and S&P 500 fell by 0.80% and 0.63% respectively. That said, futures tracking the S&P, Dow, and Nasdaq 100 are currently flashing green, pointing to a higher open today. Asia was mixed, with Japan’s Nikkei 225 and Topix edging lower by 0.78% and 0.33% correspondingly, but Hong Kong’s Hang Seng index gaining 0.18%. Europe was a more cheerful story, as all major benchmarks are expected to open higher today, according to futures markets.

COMMODITIES: Oil prices edged up on Thursday and are trading higher on Friday as well, with WTI and Brent crude gaining 1.3% and 1.5% respectively. The gains came amid a plethora of OPEC-related comments ahead of the cartel’s bi-annual meeting today. The latest comments suggest the producers may deliver an output increase of the magnitude of 600k – 1 million barrels per day (bpd), though Iran has continued to voice disagreement with a large production hike, a factor that has likely been supporting prices up until now. A sizeable output hike, closer to 1 milliion bdp could weigh on oil prices , whereas a more modest increase closer to 600k (or perhaps no increase at all) could boost prices further. In precious metals, gold is up by 0.2% on Friday, and is currently hovering near the $1,269 per troy ounce level. Buyers remain scarce for the yellow metal, which closed the session lower yesterday even despite a weaker US dollar and declines in stock markets. 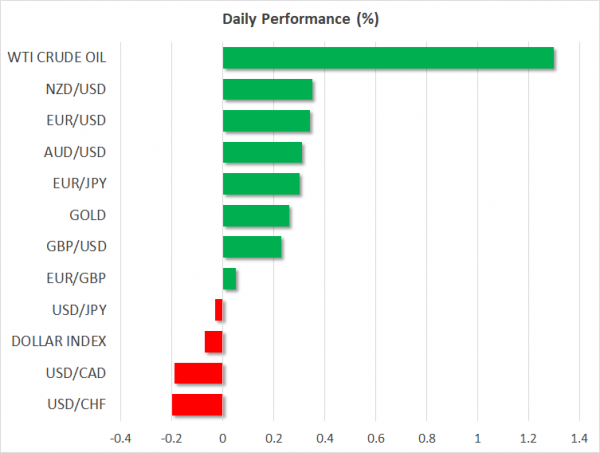 The Bank of England (BoE) kept its policy unchanged yesterday, as was widely anticipated, though the vote count was more hawkish than expected. Three out of the nine policymakers voted in favor of an immediate rate increase, up from just two back in May, as the Bank’s chief economist Andy Haldane joined the hawks. Haldane is considered neither dovish nor hawkish, so his dissent may have carried extra weight in signaling that a rate increase at the next meeting in August may be on the cards. Moreover, the minutes maintained a broadly upbeat tone, revealing that all members are more confident the slowdown in Q1 was only a transitory phenomenon, and noting that household spending has “bounced back strongly”.

Given these relatively hawkish signals, the implied probability for a rate increase in August jumped to 47% according to the UK OIS. By extent, the British pound rallied on the news, erasing the hefty losses it had posted up to that point in the session to trade much higher. Moving forth, considering that investors still view an August hike as a coin toss, incoming UK data could attract even more attention than usual. Their quality could shape market expectations around how the Bank will act and hence, dictate the pound’s forthcoming direction – absent any major developments on the Brexit front, of course.

Even though the dollar index touched a fresh 11-month high on Thursday, it did not manage to hold onto its gains, ending the session lower overall. The correction followed a disappointment in the Philadelphia Fed business activity index. Although this is considered a “soft” data point, its unexpected tumble on an otherwise quiet calendar day probably cast doubt on the narrative the US economy grew at 4.7% in Q2 – as signaled by the Atlanta Fed GDPNow model –, thereby triggering some profit-taking in the dollar.

Euro/dollar was on the back foot early on Thursday, as the appointment of two Eurosceptic voices in the Italian parliament reignited political concerns, sending Italian yields higher. However, it rebounded later in the session on the back of a softer dollar. Technically, it appears the world’s most traded currency pair is in the process of forming a double bottom near 1.1510. A break above the 1.1840 barrier is needed to confirm such a pattern. 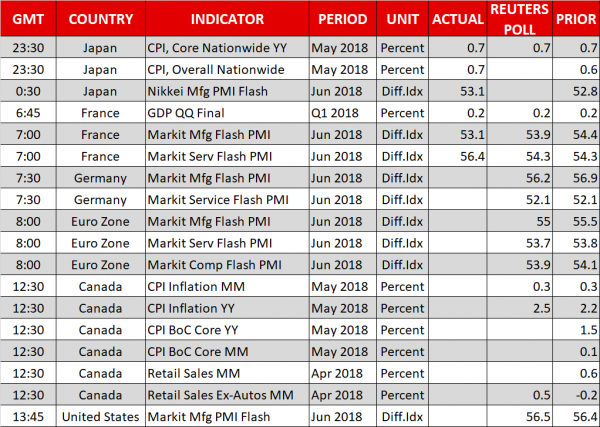 Friday’s calendar features numerous important releases, including June preliminary PMIs out of the eurozone and Canadian inflation & retail sales figures. Meanwhile, the OPEC meeting in Austria will also be firmly in focus, while updates on trade deliberations may also emerge.

The eurozone’s flash manufacturing and services PMIs, as well as the composite measure that blends the two sectors, are due at 0800 GMT. All three indices are anticipated to further ease in June. Specifically, if the figures come in line or worse than forecasts, this would mark the sixth straight monthly decline for manufacturing activity and the fifth for services and the composite measure; the latter is viewed as a good overall growth indicator for eurozone economies. Such an outcome would confirm that slowing economic momentum in the euro area as we entered Q2 was not transitory after all. Still, all prints are expected above the 50 level, pointing to positive sectoral growth.

Germany, the eurozone’s largest economy will see the release of its respective PMI readings at 0730 GMT, while France (the euro area’s second largest economy) saw its corresponding numbers hitting the markets at 0700 GMT. Its manufacturing PMI came in below expectations and the figure for services was a beat; the euro/dollar pair gained after the release. Meanwhile, earlier in the day (0645 GMT), France’s Q1 GDP growth was revised down to 0.2% on a quarterly basis, from the 0.3% in the preliminary reading.

At 1230 GMT, the attention will turn to Canada which will see the release of important data on inflation and retail sales. May’s headline CPI is projected to grow by 2.5% y/y which would mark a six-year high and compares to April’s 2.2%. On a monthly basis, it is forecast to rise by 0.3%. The Bank of Canada has a target band for annual inflation that ranges between 1 and 3%. The core measure of inflation that excludes volatile items and which stood at 1.5% y/y in April, as well as other gauges of price pressures monitored by the BoC – common, median and trimmed CPI – will also be attracting attention.

Regarding retail sales, those are expected to show no growth in April after expanding by 0.6% in March. The same does not hold true for the core measure of sales though, which is forecast to rise by 0.5%, following a contraction by 0.2% in March; core retail sales exclude automobiles.

The Bank of Canada next decides on rates on July 11. Market participants put the odds for a 25bps rate hike during that meeting at roughly 60% according to Canadian OIS. Upbeat data out of Canada today can boost those expectations, consequently supporting the loonie which has suffered considerable losses relative to its US counterpart as of late; the opposite holds true as well.

Markit’s manufacturing PMI for the US due out at 1345 GMT is anticipated to slightly edge higher in June and match April’s 56.5, this being the highest since late 2014.

The Baker Hughes report on active US oil rigs is due at 1700 GMT. Of far more importance for oil prices though, is expected to be OPEC’s two-day meeting which commences today in Vienna; big oil producers that are not OPEC members, such as Russia, will also participate in the meeting. The cartel and its allies will decide on their oil supply policy moving forward.

Lastly, on the trade front, reports suggest some officials within the Trump administration are attempting to resume talks with China ahead of the initial round of tariffs on Chinese imports going into effect on July 6; the goal seems to be avoiding a tit-for-tat escalation that would increase the odds for a trade war. These efforts also exhibit a rift of some sorts within the White House between policy-hawks and those promoting a more moderate stance. 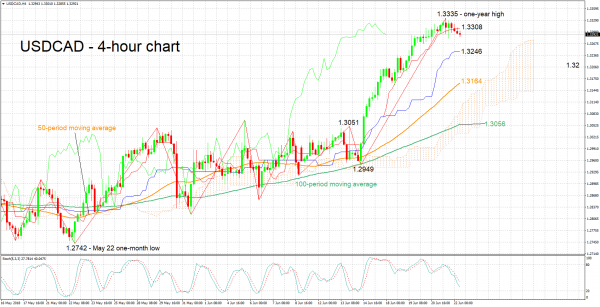 USDCAD has weakened a bit after reaching a one-year high of 1.3335 during Thursday’s trading. The short-term bias remains to the upside as indicated by the positively-aligned Tenkan- and Kijun-sen lines, though the flat Kijun-sen points to an easing of momentum. Moreover, the stochastics are giving a bearish signal in the very short-term, with the %K line below the slow %D one and both lines heading lower.

Upbeat releases out of Canada can boost the loonie, weighing on USDCAD. Support to declines could come around the current level of the Kijun-sen at 1.3246, with the 1.32 round figure being eyed in case of steeper declines.

Worse-than-expected figures on the other hand are likely to push the pair higher. Immediate resistance may come around the Tenkan-sen at 1.3308 – including the 1.33 handle – which failed to hold on the way down earlier in the day. Further above, the attention would turn to yesterday’s one-year high of 1.3335, with the 1.34 handle increasingly coming into view afterwards.

Crude Oil Volatility Could Pick Up Into The OPEC Meeting