The latter part of this week promises to be exciting for the dollar, as US durable goods orders for June will hit the markets on Thursday, and the first look at GDP for Q2 is released on Friday, both at 1230 GMT. Forecasts point to robust figures, particularly for economic growth, which could enhance speculation for two more Fed rate hikes this year and potentially provide another lift to the dollar.

US durable goods orders are expected to have risen by a notable 3.0% in June, a rebound following a 0.4% drop in the preceding month. That said, most of the recovery appears to have been driven by a surge in volatile components like airplanes, as the core figure that excludes transportation equipment is only projected to rise by 0.5%, after stagnating in May. 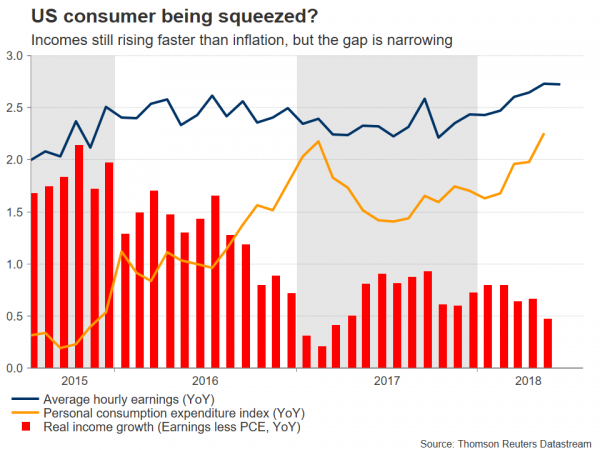 Turning to GDP growth, the preliminary number is expected to show the US economy expanded by a remarkable 4.1% in Q2 on an annualized basis, much faster than the modest 2.0% recorded in Q1. Beyond economists’ forecasts, models like the Atlanta Fed GDPNow place their estimates even higher, at 4.5%. The anticipated robust print appears to be owed to a combination of the recent fiscal stimulus kicking in, as well as some one-off factors, like a surge in soybean exports before retaliatory tariffs from China took effect.

Still, such a solid GDP print would likely reinforce expectations that the Fed is set to raise interest rates twice more this year. At the time of writing, investors have fully priced in one more 25bps rate increase by year-end, while they also assign a 61% probability for a second one, Fed fund futures suggest.

Stronger-than-projected data could push the likelihood for a second hike even higher and thereby, bring the dollar under renewed buying pressure. Looking at dollar/yen technically, immediate resistance to advances may be found near the 111.55 zone, defined by the July 23 peaks. Even higher, attention would turn to 112.20, defined by the inside swing low on July 16, before the seven-month high of 113.16 comes into view.

On the downside, initial support to declines may be found near 110.25, the July 4 low. A clear break below it could open the way for the 109.35 territory, marked by the trough of June 25. Even steeper bearish extensions could see scope for the 108.10 area, this being the low of May 29. 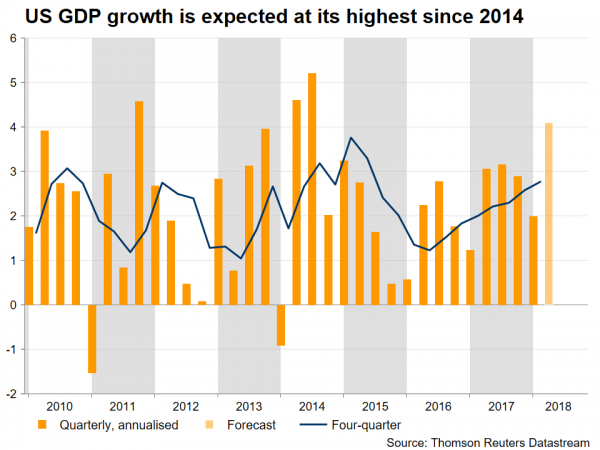 Finally, it’s worthy to note that the financial community appears to be almost unanimous that even though the Q2 GDP print will probably be very strong, such numbers are unlikely to be sustained in the coming quarters. The effects of the tax cuts are set to fade moving forward, while real incomes in the US appear to be gradually but steadily squeezed, potentially pressuring consumers. Meanwhile, the adverse effects of trade tensions may be set to manifest themselves, with Fed Chairman Powell saying last week that there are increasing signs firms are putting expenditure plans “on ice” amid trade worries.

China Continues To Lead The Way