Today’s sharp slide in the Turkish lira (currently down -6% at $5.9446, but was down -15% at $6.200 at one point) has obviously seeped through into broader financial markets, causing the USD and JPY to jump on safe haven flows and equities to fall, while the EUR (€1.1469) is stung by concerns over European banks’ exposure to Turkey.

Today’s dramatic drop was instigated by a Financial Times report that the European Central Bank (ECB) is examining the Turkish exposure of several of the region’s banks.

“The ECB’s banking watchdog is monitoring the situation in Turkey and is in contact with eurozone banks about their individual exposures to the country.”

Nevertheless, it’s believed that the level of overall exposure of European banks to Turkey remains limited.

The markets biggest concern is whether President Erdogan is threatening the independence of the Central Bank of the Republic of Turkey (CBRT).

The central bank left interest rates unchanged last month, and the belief is that political pressure is keeping the central bank from taking the necessary steps.

Now the train of thought is that an emergency interest rate hikes during this current currency crisis might only provide fleeting relief. They are expected to raise interest rates over the next week or two.

The market is currently waiting for Turkey’s Finance Minister to unveil their new economic model – odd’s are it will do nothing to stem the tide of negativity towards emerging market currencies at the moment. 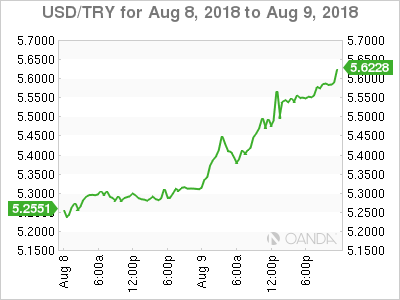