Wednesday August 22: Five things the markets are talking about

This morning U.S stock futures are under pressure, while both Europe and Asia equity sessions overnight traded mixed as investors try to guesstimate the potential fallout from President Trump’s latest legal drama.

Note: To date, capital markets has had to contend with three-trading themes – the impact of U.S tax cuts, a global trade war/protectionism and a plummeting emerging market – now investors have to deal with Trump’s future legal woes.

On the announcement of yesterday’s guilty plea from Trump’s former attorney, Michael Cohen, on Federal charges, initially sparked ‘mild’ demand for safe-haven assets, but further follow through in other sessions was not instigated. This morning, the ‘big’ dollar trades steady, so far, alongside U.S Treasuries.

The markets focus will now shift to today’s Fed minutes (02:00 pm EDT) – will investors be given more insight into monetary policy after Trump complained about a tighter U.S monetary policy this week?

It’s unlikely that this afternoon’s minutes will provide any new clues on how U.S interest rate policy is going to develop further. The Fed’s implied rate path – two further rate rises in 2018 and probably two more in 2019 – is mostly priced in.

Perhaps the U.S dollar ‘bull’ will have to wait for Fed Chair Powell’s speech at Jackson Hole symposium for clues on U.S rate policy, and for any response from Powell to Trump’s comments this week?

In Japan, the Nikkei closed higher overnight supported by tech shares, which tracked gains in their U.S colleagues. The Nikkei share average gained +0.64%, while the broader Topix advanced +0.77%.

Note: Most investors have remained on the sidelines ahead of today’s Sino-U.S trade talks, which are expected to begin later this afternoon.

Down-under, Aussie shares ended lower overnight, weighed by materials and financials, as investors were wary of PM Turnbull’s precarious grip on power as he rejected resignations from seven cabinet members in a bid to head off a renewed leadership challenge. The PM was also forced to drop plans to cut company tax after parliament rejected the proposal. The ASX 200 finished down -0.3%. In S. Korea, the stock benchmark notched its first four-day winning streak since early June as it rode a rebound in the chip sector. The Kospi rallied +0.1%.

In Hong Kong and following the U.S’s Tuesday’s lead, stocks closed higher for a fourth consecutive session overnight, despite investors waiting for the latest round of Sino-U.S trade talks. At close of trade, the Hang Seng index was up +0.65%, while the Hang Seng China Enterprises index rose +1.1%.

In China, stocks fell overnight, weighed down by persistent economic concerns and worries over the outlook for trade ahead of lower-level talks in Washington today. The blue-chip CSI300 index fell -0.6%, while the Shanghai Composite Index ended down -0.7%. 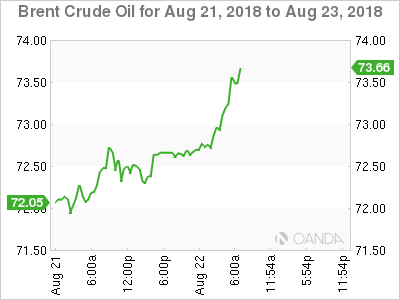 Oil prices are a tad higher overnight on a drop in U.S crude inventories and a weaker dollar, while concerns about a potential shortfall in future Iranian supply due to U.S sanctions is also providing underlying support.

API data yesterday showed that U.S crude inventories fell by -5.2M barrels in the week to Aug. 17 to +405.6M barrels. The market was looking for a fall of -1.5M barrels.

Investors will take their cues from today’s U.S EIA report at 10:30 am EDT.

Ahead of the U.S open, gold prices have eased a tad after touching a one-week high overnight, as the ‘big’ dollar recovers some ground lost to U.S President Trump’s criticism of the Fed’s interest rate hikes. Spot gold has retreated -0.2% to +$1,192.93 an ounce, after earlier hitting +$1,197.66. U.S gold futures are largely unchanged at +$1,200 an ounce. 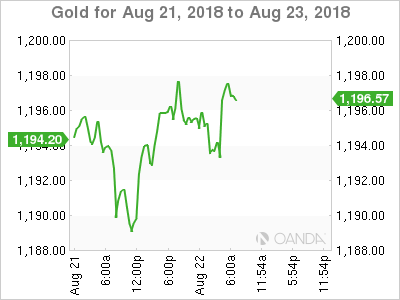 The Tsy-Bund spread is at +250 bps – the tightest in two-months as the eurozone economy and inflation shows signs of improvement and the market questions how long the U.S. economic strength will last.

Other eurozone bond yields are mostly unchanged, except Italian bonds, which continue to find some demand after Moody’s indicated on Monday that it was extending a ratings review for a downgrade. Italy’s 10-year BTP borrowing costs have dropped another -1 bps to +2.95%. 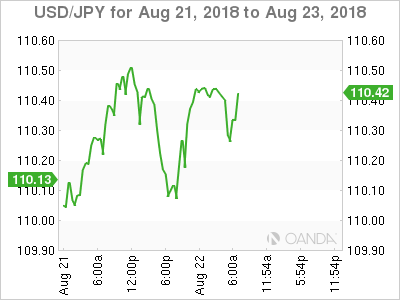 4. Dollar off its intraday lows

The ‘mighty’ U.S dollar is off its worst levels overnight after a multi-day sell-off from recent cycle highs, but appears to remain on the defensive in a quiet E.U session as the market awaits for the release of today’s U.S Fed Aug. minutes and upcoming Sino-U.S trade talks.

Trumps verbal intervention has weakened the U.S dollar. This week, he has complained about the job Fed Chair Powell was doing and believed that the Fed should be more accommodating to his policies. Given that the Fed is an independent institution, explicit comments about interest rates from a sitting President could just as easily have the opposite effect.

EUR/USD and GBP/USD pairs trade within striking distance of their two-week highs at €1.1592 and £1.2922 respectively. Dealers took notice of recent Euro area wage data that has aided the ECB’s case for policy exit down the road.

There seems to be some market confusion on a Nafta “handshake” deal – a bilateral agreement between the U.S and Mexico. The U.S announced that a deal was targeted for Thursday, however, Mexico has denied any such agreement. 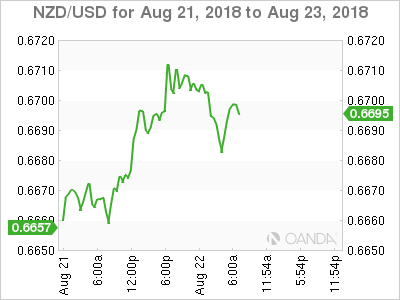 Data last night showed that retail sales in New Zealand gained a seasonally adjusted +1.1% in Q2, beating a market forecast for an increase of +0.3%.

According to the data, 11 of the 15 retail industries had higher sales volumes.

Hardware, building, and garden supplies had the largest increase, up +4.7% after a subdued +0.6% increase in Q1. 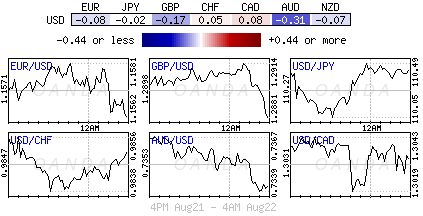