FOREX: Dollar/yen pulled back below a two-week high of 111.48 reached early today, falling to 111.30, near Thursday’s close price ahead of Powell’s Jackson Hole speech. The dollar index, which measures the dollar’s strength against six major currencies was also in a bearish move, printing losses towards 95.33 (-0.34%) as the euro and the pound strengthened. Euro/dollar stood higher at 1.1585 (+0.42%), helped by solid GDP growth data out of Germany, and pound/dollar edged up to 1.2846 (+0.27%), unable to post sharper gains thanks to fears of a no-deal Brexit. Meanwhile in China, the foreign minister, Lu Kang, urged the US to back down from its protective tariff measures, saying earlier today that Beijing will keep retaliating if Washington continues to impose “unreasonable” trade frictions. Moreover, a Reuters report stated that the PBOC resumed its counter-cyclical factor in its currency fixing mechanism, pushing dollar/offshore yuan down to 6.83 (-0.91%). The Swedish krona jumped on the central bank’s comments today after Riksbank’s Deputy Governor said that the Bank does not need to “slavishly” follow the ECB, raising the odds for a rate hike in October. He also said that overseas risks are not affecting the country immediately and the economy is developing in line with forecasts. Dollar/krona dropped to a two-week low of 9.93 before it crawled up to 9.1268 (-0.16%). In the antipodean space, aussie/dollar stood higher at 0.7303 (+0.84%), recovering after the market-friendly Treasurer Scott Morrison replaced Malcolm Turnbull as prime minister, beating the former home affairs minister Peter Dutton, a top contender and a migration hardliner. Kiwi/dollar was also up on the day at 0.6667 (+0.51%). Dollar/loonie was slightly down at 1.3069 (-0.09%), while dollar/lira changed hands higher at 6.02 (+0.52%), aiming to end the week in the green after last week’s sharp fall. Dollar/rand was the worst performer, losing 1.06%.

STOCKS: European stocks opened higher on Friday, though with moderate gains as global trade conditions remained uncertain. At 1225 GMT, the pan-European STOXX 600 and the blue-chip Euro STOXX 50 were up by 0.21% and 0.17% respectively, both set to finish the week positive after three consecutive weeks of declines. The German DAX 30 rose by 0.16%, the French CAC gained by 0.40%, while UK’s FTSE 100 increased by 0.18%. The Italian FTSE MIB was the best performer, gaining 0.62%. Futures tracking S&P 500, Dow Jones and Nasdaq 100 were all in the green but held moderate gains, pointing to a positive open.

COMMODITIES: Crude oil prices maintained positive momentum as data displaying larger-than-anticipated declines in US oil inventories this week, as well as signs that the US renewal of sanctions against Iran are weighing on the Iranian oil supply, helped to boost the market. WTI crude hit a two-week high at $68.56/barrel (+1.08%) and Brent climbed to a one-month low of $75.52 (+1.07%). In precious metals, gold was recouping yesterday’s losses, last seen at $1,192.9/ounce (+0.68%). The yellow metal is on track to close the week in the positive territory after declining for the past six weeks. 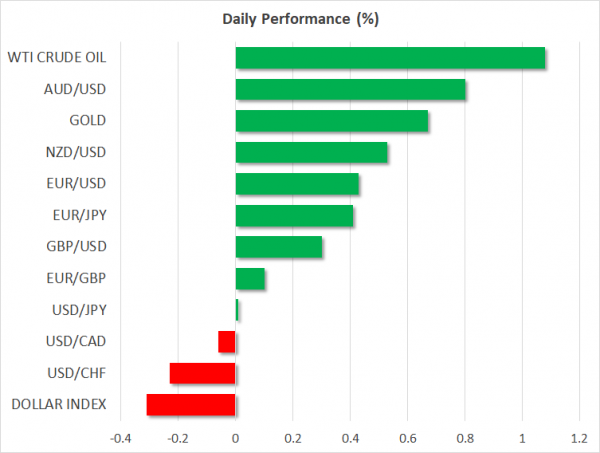 Day Ahead: Powell’s speech at Jackson Hole the highlight with US durable goods orders on the agenda as well

On Thursday, US-Chinese two-day trade talks ended with no significant progress, just after import tariffs on $16 billion worth of products were triggered by each nation, increasing the likelihood of a further escalation in tit-for-tat tariffs that threaten global growth. However, the main focus today is what Fed Chair Jerome Powell has to say at the Jackson Hole Symposium of Central Bankers at 1800 GMT. His topic is on “Monetary Policy in a Changing Economy” and investors expect the Fed chief to maintain an upbeat view on the US economy and keep the door wide open for two more rate hikes this year despite US President’s complaints about the strategy.

Looking at the economic calendar, at 1230 GMT, durable goods orders for July are scheduled to be released out of the US. Predictions are for durable orders to decline by 0.5% on a monthly basis from a positive reading of 0.8% m/m in the preceding month. As for the core measure excluding transportation, this is expected to accelerate to 0.5% from 0.2% before. Excluding defense items, the index is forecasted to tick lower, from 1.3% m/m to 0.8% m/m.

In energy markets, investors will keep a close eye on the US oil rig count issued by the Baker Hughes company at 1700 GMT.