For the 24 hours to 23:00 GMT, the EUR declined 0.98% against the USD and closed at 1.1635, amid renewed worries surrounding Italy’s budget proposal, following reports of delayed Italian budget meet.

On the data front, Germany’s flash consumer price index (CPI) advanced 2.3% on a yearly basis in September, notching its highest level since 2011 and following a rise of 2.0% in the previous month. Market participants had envisaged the CPI to climb to 2.0%. Additionally, the nation’s Gfk consumer confidence index unexpectedly jumped to a level of 10.6 in October, compared to a reading of 10.5 in the prior month.

In the US, data showed that US final annualised gross domestic product (GDP) advanced 4.2% on a quarterly basis in 2Q 2018, in line with market expectations and confirming the preliminary figures. In the previous quarter, the GDP had recorded a revised advance of 2.2%. Further, the nation’s the flash durable goods orders rebounded 4.5% on a monthly basis in August, driven by surge in aircraft demands and more than market expectations for an advance of 2.0%. In the prior month, durable goods orders had fallen 1.7%.

On the other hand, the US advance goods trade deficit unexpectedly widened to $75.8 billion in August, higher than market anticipations for a deficit of $70.6 billion. The advance goods trade had posted a deficit of $72.2 billion in the prior month. Moreover, pending home sales dipped 2.5% on a yearly basis in August, more than market expectations for a fall of 1.0%. Pending home sales had registered a revised drop of 0.7% in the preceding month. Also, seasonally adjusted initial jobless claims climbed to a level of 214.0K in the week ended 22 September 2018, higher than market consensus for a rise to a level of 210.0K. In the prior week, initial jobless claims had registered a revised level of 202.0K.

Moving ahead, investors would await Euro-zone’s consumer price index along with Germany’s unemployment rate, both for September, set to release in a few hours. Later in the day, the US personal income and personal spending, both for August followed by the Chicago purchasing managers’ index and the Michigan consumer sentiment index, both for September will pique significant amount of investors’ attention. 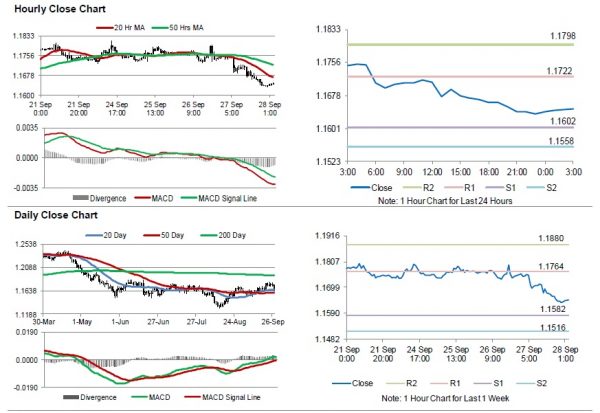 EU Indices Still Up This Morning | TA Focus On Diageo