Macroeconomic news indicated that Euro-zone’s seasonally adjusted retail sales unexpectedly eased 0.2% on a monthly basis in August, declining for the second consecutive month and defying market consensus for a rise of 0.2%. In the prior month, retail sales had recorded a revised drop of 0.6%. On the other hand, the region’s final Markit services PMI advanced to a level of 54.7 in September, at par with market expectations and confirming the preliminary figures. In the previous month, the PMI had registered a reading of 54.4.

Additionally, in Germany, the final services PMI rose to an 8-month high level of 55.9 in September, falling short of market expectations for a rise to a level of 56.5. In the prior month, the PMI had recorded a reading of 55.0, while preliminary figures had indicated a rise to 56.5.

In the US, data showed that the US ADP private sector employment climbed to a 7-month high level of 230.0K in September, compared to a revised advance of 168.0K in the preceding month. Market participants had anticipated the private sector employment to rise to a level of 184.0K. Additionally, the ISM services PMI unexpectedly climbed to a level of 61.6 in September, compared to a reading of 58.5 in the prior month. However, the nation’s final Markit services PMI fell to a level of 53.5 in September, following a reading of 54.8 in the previous month. The preliminary figures had indicated a fall to 52.9. Market participants had envisaged the PMI to drop to a level of 53.0. Meanwhile, the US mortgage applications remained flat on a weekly basis in the week ended 28 September 2018, after a rise of 2.9% in the prior week.

Looking forward, investors would await Germany’s Markit construction PMI for September, slated to release in a while. Later in the day, the US factory orders and durable goods orders, both for August, followed by initial jobless claims, will garner significant amount of investor’s attention. 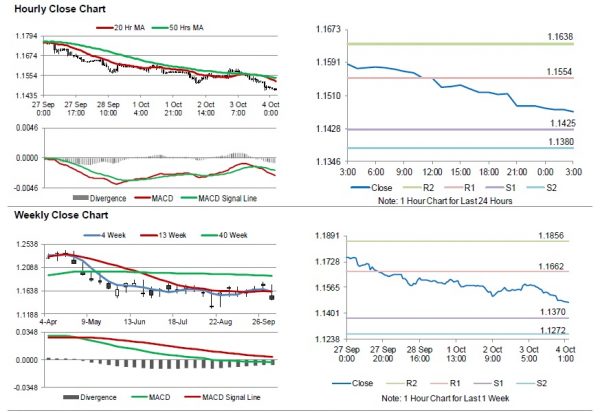 Risk Sentiment In The Driver’s Seat