The US will see the release of its retail sales data for September on Monday, at 1230 GMT. Forecasts point to an acceleration, which may amplify speculation for a robust Q3 GDP print, potentially helping the dollar to claw back some of its latest losses.

The US economy remains on a very solid footing, with fiscal stimulus set to keep growth above trend and above potential for a while longer. The third quarter seems to have been robust in this respect, as the Atlanta Fed GDPNow model estimates GDP growth at a 4.2% annualized rate – the same pace as in Q2. As such, investors are increasingly pricing in more tightening by the Fed in 2019, and by extent pushing US bond yields higher, lifting the dollar overall in recent weeks. 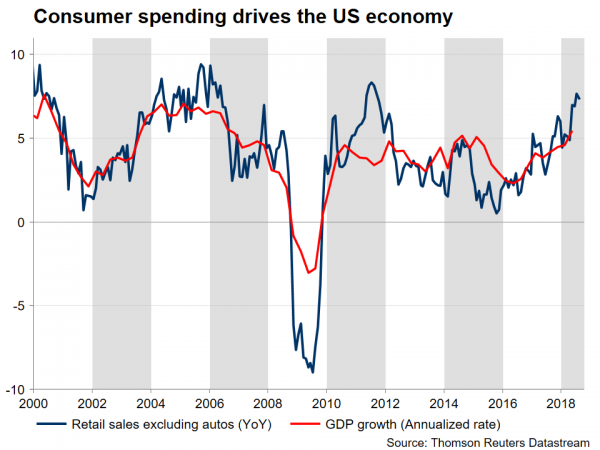 The upcoming retail sales data are forecast to reaffirm this narrative. Sales are anticipated to have accelerated to 0.5% in monthly terms, from a mere 0.1% in August. Meanwhile, the core figure, which excludes automobiles sales, is expected to clock in at 0.3% in September – unchanged from previously.

The optimistic forecasts are supported by the surge in both the Conference Board and the University of Michigan’s consumer sentiment indices for the month. The former unexpectedly soared to a fresh 18-year high, while the latter came within breathing distance of its own 14-year highs, signaling heightened consumer optimism.

At the time of writing, investors assign a 78% probability for the Fed to hike rates again in December according to market-implied pricing derived from Fed funds futures. A stronger-than-expected set of retail sales data could push those odds even higher, potentially helping the dollar to recoup some of its latest losses.

Technically, advances in dollar/yen could meet preliminary resistance near 112.80, a level marked by the lows of October 8. An upside break could see scope for a test of the 113.50 barrier, defined by the trough of October 3, with even steeper advances eyeing the 11-month high of 114.54.

On the flipside, a disappointing set of data may push the pair lower. Further declines in may stall initially around 111.85, the low of October 11. A bearish break may open the way for the 110.35 zone, this being the September 7 bottom. Lower still, support may be found at 109.75, the August 21 low.