This week promises to be an entertaining one for the dollar, as the minutes from the latest Fed gathering, several speeches by influential FOMC members, and a raft of key US economic data will probably keep traders on the edge of their seats. To top it all off, the week concludes with the Trump-Xi Jinping meeting in Argentina, which may also impact the greenback via the risk sentiment channel.

The past weeks have seen a notable repricing of Fed rate-hike expectations. While investors are still fairly convinced the central bank will raise rates again by 25bps in December, assigning a 78% probability to such an action according to the Fed funds futures, doubts are growing about the rate path in 2019. Speculation that the Fed could hit the pause button next year in the face of a slowing economy has picked up wind and markets are now only pricing in a little more than one rate increase in 2019, after the one in December. This is a long way off from the three hikes the Fed itself has penciled in for that year. Against this backdrop, the upcoming data releases and Fed communication may be instrumental in shaping rate-expectations and hence, in determining the dollar’s near-term direction. 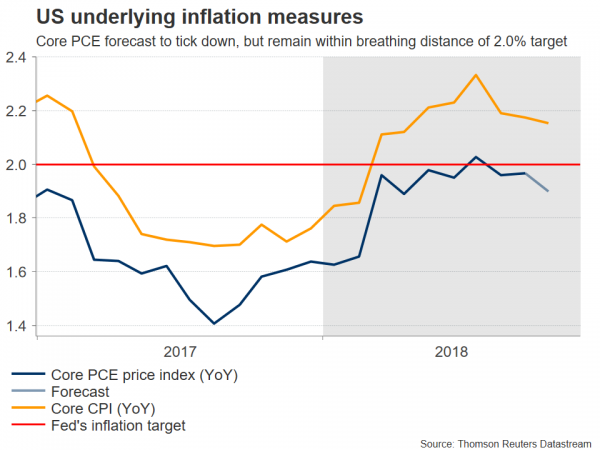 Important events begin on Tuesday, when Fed Vice Chair Clarida delivers remarks at 1330 GMT. Then on Wednesday, the second estimate of US GDP for Q3 will hit the wires at 1330 GMT. Growth is expected to be confirmed at the initial reading of 3.5%, and if so, any major market reaction is unlikely. Of greater importance may be a speech by Fed chief Powell at 1700 GMT before the prestigious Economic Club of New York. Investors will hang on his lips for guidance as they try to determine whether the recent rate repricing was justified, or perhaps a little overdone. Anything suggesting the Fed remains on track to meet its own rate projections could cause the dollar to soar.

Thursday will bring both data releases (1330 GMT) and the minutes from the latest FOMC meeting (1900 GMT). On the data front, personal income and consumption are both expected to have risen by 0.4% m/m in October, from 0.2% m/m and 0.4% m/m in September respectively. Meanwhile, the core PCE price index for the same month is forecast to have ticked down to 1.9% in yearly terms from 2.0% previously; recall that this is the Fed’s preferred inflation measure. As for the minutes, those will pertain to the November 8 meeting, where the Fed kept rates unchanged and made only marginal changes to its policy statement. Investors will look for any signals on the above-mentioned theme, namely whether the Committee will consider pausing its hiking cycle next year.

Last but not least, Friday marks the highly-anticipated meeting between the US and Chinese presidents. Expectations are riding high that some form of “trade ceasefire” will be agreed. If that is indeed the case, market sentiment could get a lift, pushing riskier assets such as stocks, the aussie, and the kiwi higher. Meanwhile, any signs of de-escalation could drag the dollar lower, as some of the safe-haven bets the currency had been attracting in recent months are unwound. In the bigger picture, while such a “truce” may provide relief to the markets and weigh on the greenback, it is unlikely to spell the end of the broader conflict as neither side appears ready to “blink” on the big issue yet; forced intellectual property transfer.

Separately, New York Fed President John Williams will speak at 1400 GMT; he holds the third most influential position at the central bank, so any policy-related remarks will attract attention.

On the other hand, preliminary support to declines could come around the crossroads of the 112.30 zone and the uptrend line drawn from the lows of May 29. A downside break would turn the medium-term bias to the downside, opening the way for a test of the 111.35 area, defined by the October 26 lows.