The USD remained steady against a number of currencies, despite the Chinese economy slowing down as expected. Hopes for an improvement in the US-Sino trading relationships seem to rise as the slowing Chinese GDP growth rate could add further pressure for an agreement. Focus is being turned towards the visit of the Chinese Vice Premier Liu He to the US, near the end of the month. Also it should be noted that some early signs about a possible ending of the US government shutdown are visible, however remain to be proven. Analysts point out that the USD may be in a recovery mode, after the bad start it had early this month. We could see the USD experiencing lower volatility today as the US markets are closed for Martin Luther King Jr. day. EUR/USD dropped on Friday breaking the 1.1387 (R1) support line now turned to resistance and bounced on the 1.1350 (S1) support line. We maintain a bearish outlook for the pair and for our opinion to change we would require the pair’s price action to break the downward trendline incepted since the 10th of January. Should the bulls take over we could see the pair breaking the prementioned downward trendline and the 1.1387 (R1) resistance line, aiming for the 1.1425 (R2) resistance hurdle. Should the bears remain in charge, we could see the pair breaking the 1.1350 (S1) support line and aim for the 1.1305 (S2) support barrier.

UK: Cross party negotiations do not seem to bring results

The pound braces for Theresa May laying out her alternative plan regarding Brexit, today in the UK Parliament, however little change is expected. Over the following week, the UK parliament will be able to propose alternatives and the Parliament is expected to vote on them on the 29th of January. Cross party negotiations seem to have produced little results according to media, hence we see the case for the UK government to concentrate its efforts in altering the Irish backstop clause of the agreement. According to media, the EU seems to be split on whether to delay Brexit and Germany’s Merkel warned the EU that a compromise may be needed. We expect the pound to maintain a bearish sentiment as uncertainty continues. Cable dropped on Friday, breaking the 1.2960 (R2) support line (now turned to resistance), the upward trendline incepted since the 3rd of January and the 1.2880 (R1) support line (now turned to resistance), hovering below it during today’s Asian session. We could see the pair maintaining a sideways motion for today, however some bearish tendencies could occur as negative headlines for Brexit may emerge. Should the market favour the pair’s long positions, we could see it breaking the 1.2880 (R1) resistance line and aim for the 1.2960 (R2) resistance level. Should the pair come under the selling interest of the market, we could see it breaking the 1.2795 (S1) support line.

In a quiet Monday in the European session we are getting the Germany’s Producer Prices growth rate for December.

As for the rest of the week: 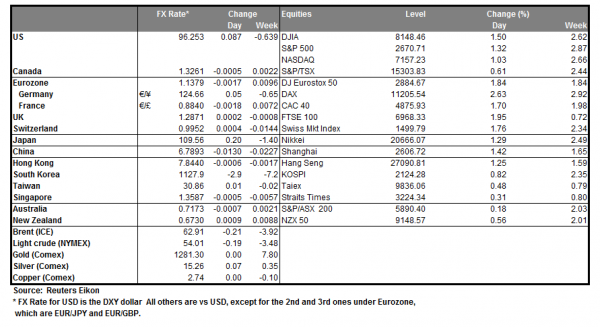