Eurozone’s initial GDP growth estimates for the fourth quarter could put the euro in a vulnerable position when they come out on Thursday at 1000 GMT as forecasters see the economy drying up before the start of an uncertain year. A day after, flash CPI figures for the month of January could add further pressure to the market, making the need of an accommodative monetary policy more apparent.

Quarter-on-quarter, GDP growth in the euroland is said to have remained unchanged at 0.2% in the three months to December but relative to the same period last year, the annual rate is projected to come weaker by 0.4 percentage points at 1.2% – the lowest expansion rate registered since Q2 2015. The slowdown looks even more worrisome when compared to the relatively robust 2.7% growth achieved in the end of 2017, which back then was taken as a sign that the bloc could grow even faster in the coming months. The subsequent data however proved the opposite, with output growth going downhill instead.

The subdued core Consumer Price Index (CPI) may have been some sort of evidence that the economic expansion was not based on a solid foundation during 2018. Despite super-easy monetary policy and a tightening labor market, the indicator remained stubbornly well below the ECB’s 2.0% inflation target, with policymakers pointing to slow-rising wages for the target miss. On Friday, preliminary readings are expected to reveal that the measure stood flat at 1.1% y/y in December, while the headline CPI, affected by the fall in oil prices, is projected to ease to 1.4% y/y from 1.6% in the prior month, reaching the smallest rate of price increases since May. 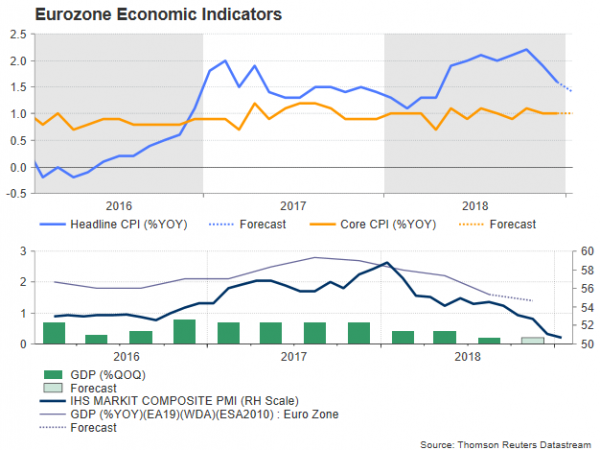 While a recession is not in the horizon, a larger-than-expected deterioration in GDP growth and CPI figures would signal that the outlook for the Eurozone economy is no longer neutral but has indeed shifted to the downside as the ECB chief Mario Draghi admitted at his press conference following the ECB policy meeting last week. Besides, with manufacturing and services PMIs slipping to four-year lows and consumer morale turning more negative in December, the bearish sentiment cannot be easily alleviated at a time when Brexit and the US-Sino trade war remain unresolved. Not to mention the additional risks stemming from the Italian fiscal stimulus and the indebted banking system. Economic developments in Germany, Europe’s economic powerhouse, seem to be a concern too after a GDP contraction in the third quarter and a slump in industrial production. Its external dependency on the diminishing Chinese economy is another reason why some caution is in the air. Nevertheless, Germany is still in good shape overall even if markets believe that it left 2018 with one black eye. Note that the German government dropped its growth forecast for 2019 to 1.0% from 1.8%. 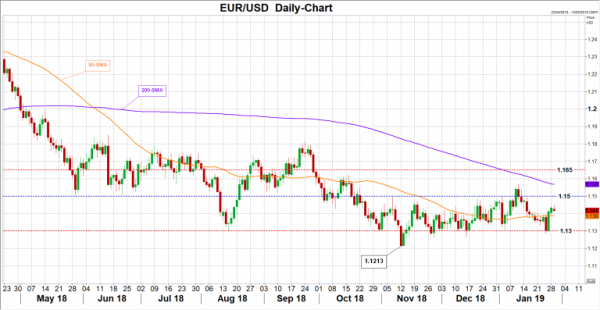 Meanwhile in FX markets, EURUSD drifted lower after Draghi acknowledged that the risk to the EU’s economic performance has shifted to the downside. Still, with the ECB chief holding prospects for a rate hike after summer 2019 alive, the price could not close below the 1.13 floor. Unfavourable GDP growth and/or CPI prints in coming days could resume bearish speculation that any rate rise may only come with a delay – and it is still an open question whether Draghi will deliver any rate hike before his term ends in October. In this case the price may head back down to 1.13. Breaking that key obstacle, attention would gather around the 1.1213 trough, while beneath that, the way could open towards the 1.11 psychological mark.

Alternatively, an upside surprise would increase optimism that some strength is still in storage to mitigate any potential negative developments inside and outside the bloc. In this case the price could retest resistance around 1.15 before meeting the 200-day simple moving average at 1.1560. If the bulls manage to break that line, the next stop could come near 1.1650.

It is also worth mentioning that discussion around growth and inflation will continue in March when the ECB is shceduled to release its new projections.