The BoE is widely expected to keep policy unchanged via a unanimous 9-0 vote on Thursday, at 1200 GMT. Focus will be on the updated economic forecasts, the likelihood for rate hikes – or cuts – this year, and Governor’s Carney’s remarks. The heightened uncertainty around Brexit coupled with a slowdown in UK growth suggest little scope for any hawkish bits, with Carney & Co. instead likely to adopt a more cautious tone. With money markets still assigning a 60% probability for a hike this year, that could weigh on sterling.

It’s “Super Thursday” in the UK, meaning that besides the rate decision and the meeting minutes, the Bank of England (BoE) will also release its quarterly Inflation Report with updated economic forecasts, which Governor Carney will present in a press conference. The UK economy has continued to lose growth momentum as evidenced by the recent dip in the nation’s PMIs, slowing in tandem with the global economy. In the UK’s case, much of this weakness is the result of Brexit uncertainties holding back business investment, as the BoE itself pointed out at the latest meeting. 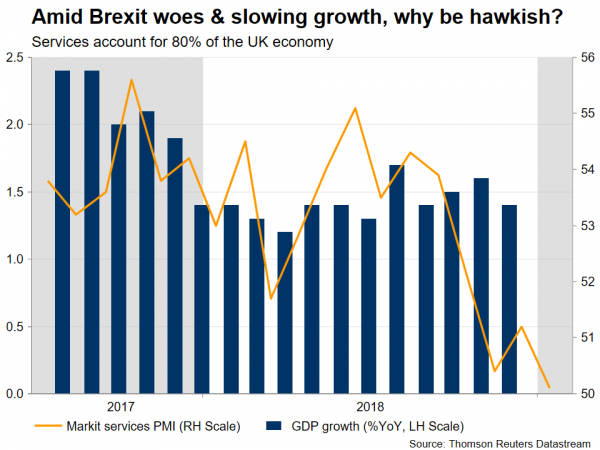 Considering that Brexit anxieties have dragged on since then, and that there are now less than two months before the UK exits the EU without an agreement in place yet, it’s safe to say that the BoE will refrain from making any hawkish remarks. If anything, the Bank is more likely to revise down its inflation and growth forecasts, given lower oil prices and the global slowdown respectively, while at the same time highlight that rates could even be cut this year in case of a disruptive, no-deal Brexit.

Remember that the BoE bases all its forecasts and expectations on the assumption that there will, eventually, be a Brexit deal. So, while the Bank will continue to reiterate – under its written communication – that further rate hikes are still on the table given this assumption, the verbal guidance by Governor Carney may take a different turn, where he stresses the adverse scenario as well. 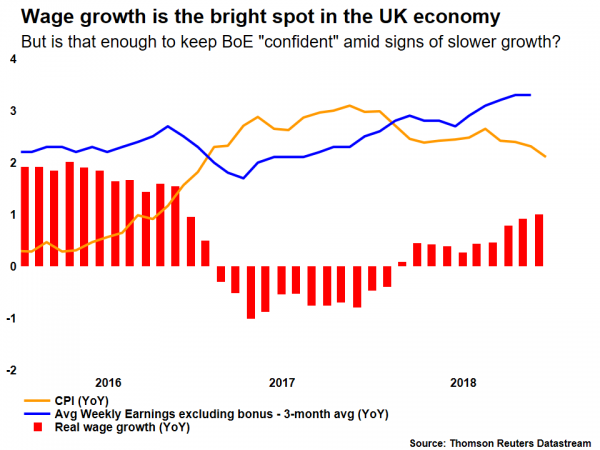 Even though markets have recently taken the view that a no-deal outcome has become less likely with Parliament taking some control of Brexit, the absence of any clear way forward in the face of a ticking clock suggests this is still a real danger. In the context of a slowing economy as well, the BoE seems to have no incentive to amplify expectations for a future hike, only to risk having to walk back on that a few weeks later in case of an unfavorable Brexit outcome.

Investors currently assign a 60% probability for a quarter-point rate increase this year, according to the UK overnight index swaps. If the BoE indeed assumes a risk-management approach and downplays the prospect of a hike or emphasizes that a cut has become a higher-probability outcome, then the pound could slide as some tightening expectations are priced out. In such a case, sterling/dollar could encounter immediate support at 1.2920, with a break lower opening the dollar for a test of the 1.2825 area.

On the other hand, if policymakers choose to focus on encouraging developments like the pickup in wage growth lately, or if one of the 9 members surprises and votes for an immediate rate increase, that could see the UK currency gain. The bulls could challenge 1.3050, marked by the inside swing low on January 30, with even steeper advances aiming for the January 31 highs at 1.3160.

Beyond what the BoE says, the bigger driver for sterling’s direction will be how the Brexit saga unfolds. After Parliament signaled it would support PM May’s deal if the Irish backstop is replaced, May is now attempting to renegotiate this controversial arrangement – something the EU has repeatedly rejected. The PM has a week to do so, as she has promised lawmakers another vote on what happens next by February 14. Since the EU is unlikely to make any real concessions, uncertainty is set to remain elevated until then, with a correction lower in sterling not to be ruled out in the interim. After that date though, it will either be an explosion higher for the pound as Parliament either i) accepts the deal ii) extends the leave date iii) calls for a second referendum – or a massive drop lower as none of these happens and the probability of a no-deal exit soars.