A key overhang for the Dollar may be clearing up after US lawmakers announced they have a deal in principle to avoid another US government shutdown this weekend. However, President Trump’s approval is still required before the spending bill can go through.

At the time of writing, the DXY is holding marginally close to 97, having posted gains over the last eightconsecutive days – its longest winning streak since 2016. This recent run of form certainly goes against initial expectations for muted Dollar strength this year given the Federal Reserve’s recent U-turn on US monetary policy.

There is a likelihood that central bank policy in the form of the Federal Reserve is not the catalyst behind the USD rally. It probably doesn’t have anything to do with the U-turn from the Fed a few weeks ago either. Investors are possibly thinking that “no news” when it comes to the ongoing US-China trade talks is not necessarily an example of “no news is good news” for this environment of trade tensions. The threat can’t be understated that the United States will pull the trigger on extra trade tariffs on Chinese goods at the beginning of March. We saw throughout the second half of 2018 that market anxiety over trade tensions pushed the Dollar higher against its global counterparts, and it wouldn’t be that much of a surprise if recent history repeats itself – if there is another escalation in the trade tariff world.

According to the Bloomberg terminal, spot returns for G10 currencies against the stronger Dollar since January 30 have experienced a clear sea of red in favour of the USD. This is following the euphoria that was created when Fed Chair Jerome Powell signalled the need for “patience” when it comes to the potential of hiking interest rates in the United States.

What else is driving the Dollar train higher?

Another perspective on what could potentially be driving the USD higher is the lure towards the Greenback being amplified by ongoing praises for the US economy. At the same time, it has become a strain to market headlines that counterparts to the United States throughout a range of developed and emerging markets are highlighting downside risks to their respective economies.

Those who are fatigued from yo-yo trade headlines in the market might be inclined instead to align their mindset to the return of economic and central bank divergence between the United States, and pretty much everywhere else. This ultimately supports the prospects of a stronger Dollar.

What data to look out for next and what could this mean to interest rate policy?

Markets will look to this week’s US January CPI reading as the next test of the Fed’s data dependence. Following that, attention will turn to next week’s release of the FOMC January 30 meeting minutes for potentially further clues on what could have encouraged the Fed’s recent pivot.

The current stance on US interest rate policy is expected to, in turn, allow other central banks to take a pause on tightening monetary policy. With central banks worldwide either standing pat or moving towards another round of a potential easing bias, investors may have less impetus to part with theircurrent darling, the Dollar.

The dovish outlook on global monetary policy, coupled with further positive indicators of US economic strength, should support the Dollar’s attractiveness and this could mean DXY returning to its recent high of 97.54 achieved in November 2018.

However, this isn’t to say that demand for the Greenback will continue unabated in the nearterm. Traders should not be looking at the USD as one-way traffic going higher up the charts by any means.

While the US government shutdown may have been averted, markets are also having to contend with this week’s crucial talks in Beijing surrounding US-China trade tensions. Both countries are nearing the end of the 90-day truce and in the event that President Trump pushes through with hiking tariffs on Chinese goods come March 2, that will be seen as a potential trigger to give the US dollar another leg up.

Although given the political and economic pressures that are at risk of creating headwinds to the world’s two largest economies, markets are holding out hope that a deal would be struck sooner rather than later. This would be viewed in the market as a potentially Dollar-negative outcome.

Should key deals be approved in Washington (to fund the US government) and in Beijing (to avert a tariff hike), these will be viewed as the catalysts for risk-on sentiment to return to the fore. Meaning that this would be a significant driver behind potentially higher global equity markets, improved demand for emerging markets and commodities like Oil.

It would however be seen as a risk to the relentless Dollar rally that has taken place over February.

Where do Emerging Markets stand in the currency environment?

Yet amidst this winning streak against G10 currencies, the US dollar has seen mixed results against emerging-market currencies during the same period. 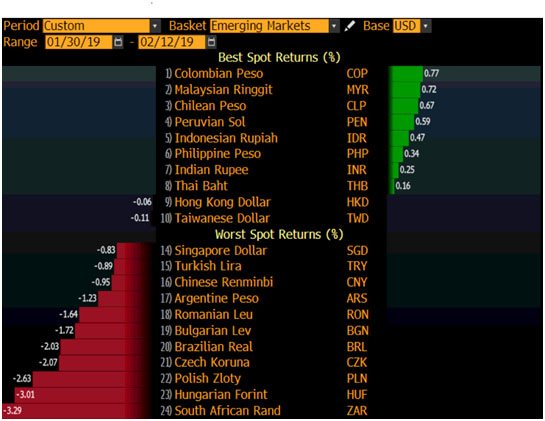 Some of these EM currencies that posted gains against the Greenback are coming back from oversold positions last year, and are supported by factors such as resilient domestic economic fundamentals, foreign fund inflows, and rebounding commodity prices.

However, EM currencies are still exposed to major events that can sway global risk sentiment, such as US-China trade tensions, Brexit uncertainties, and slowing global growth. China’s moderating economic conditions remain a major overhang for the global growth narrative, and the slowdown may be felt in many emergingeconomies via the trade and FX channels.

Ultimately, EM currencies will likely be dictated primarily by the broader US dollar theme, and whether the Greenback can build on its one percent climb so far in 2019.