Wednesday March 20: Five things the markets are talking about

All eyes are on today’s FOMC meeting where the Fed is expected to hold interest rates steady, announce plans for the end of asset roll-off from its balance sheet, and lower its “dot-plot” projections for the number of interest-rate hikes this year. Market participants will also be scrutinizing whether dealer expectations of a rate cut in 2020 has any substance.

Nevertheless, global equities are either trading mixed or are lower as investors adopt a cautious approach ahead of the Fed’s decision (2 pm EDT) and further news on Sino-U.S trade talks, where negotiators are said to remain at “odds.”

U.S Treasury yields are trading atop of the recent low yields, while the ‘big’ dollar has found some traction after a few sessions of underperforming. Elsewhere, the pound is drifting as the market eyes PM Theresa May’s efforts to draft a request for an extension to conclude a Brexit deal that could pass Parliament in another meaningful vote.

On tap: The Bank of England (BoE) and Swiss National Bank (SNB) deliver their interest rate decisions tomorrow, while on Friday, Euro-zone purchasing manager survey numbers will give an indication of the health of the region’s industrial and service sectors.

In Japan, the Nikkei saw a small gain overnight as the market awaits the Fed’s decision. The index share average ended +0.2% higher after trading in negative territory in early trade. The broader Topix added +0.3%.

Note: Japanese markets are closed on Thursday for a bank holiday.

Down-under, Aussie stocks ended lower overnight after reports of tension in Sino-U.S trade talks soured sentiment. The S&P/ASX 200 index declined -0.32% at the close of trade. The benchmark was little changed on Tuesday. In S. Korea, the Kospi stock index ended steady earlier this morning, recouping much of its losses, as tech shares lifted the market in the late trading. The index closed little changed, down -0.02%.

In China, equities were little changed overnight ahead of the Fed decision and on uncertainty surrounding Sino-U.S trade negotiations. Both the Shanghai Composite index and the blue-chip CSI300 index settled unchanged. In Hong Kong, it was a different scenario, both the Hang Seng index and the Hang Seng China Enterprises index ended down -0.5%.

In Europe, regional bourses trade lower across the board following on from a mixed session in Asia and slightly higher U.S futures this morning. 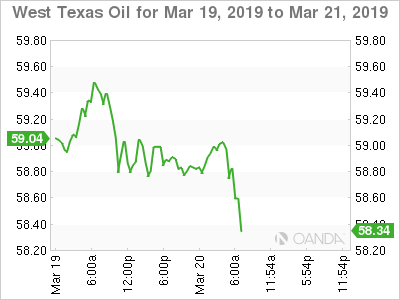 Oil prices have edged a tad higher, supported by ongoing supply cuts led by OPEC+ and U.S sanctions against Iran and Venezuela, although gains remain capped by market concerns over economic growth.

Both global growth concerns and ongoing oversupply fears are creating headwinds for the commodity.

OPEC and a group of 10 oil-producing nations led by Russia are deepening their crude production cuts but remain split on whether the curbs should remain in place through the end of the year.

Data from the API yesterday showed that U.S crude, gasoline and distillate inventories unexpectedly fell in the week to March 15.

Expect dealers to take their cues from today’s U.S EIA report, which is due to publish its weekly crude production and storage level report around 10:30 am EDT. 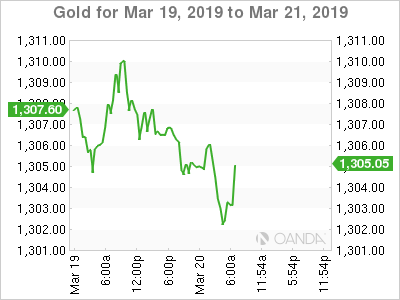 U.S Treasury’s and core eurozone bond yields have eased away from their two-week highs print of yesterday, as dealers wait for further clarity on the direction of U.S rates and the market struggles to make sense of the UK’s Brexit negotiations.

Currently, futures pricing suggests the next move by the Fed will be a rate cut, likely in 2020, though most expect one more hike this year, likely in June. Also, U.S policy makers are expected to release details of their plan to end the monthly reduction of its massive balance sheet.

Elsewhere, the Bank of Japan (BoJ) minutes last night indicated that Governor Kuroda and the central bank remain on the “dovish” side and will continue its persistent large-scale easing. Japan Finance Minister Aso stated that he had no difference with PM Abe on BoJ’s +2% price target. He indicated that he had discussed numerous times with BoJ’s Kuroda that it was becoming “very difficult to achieve price goal when plunging oil prices weighed on inflation.” 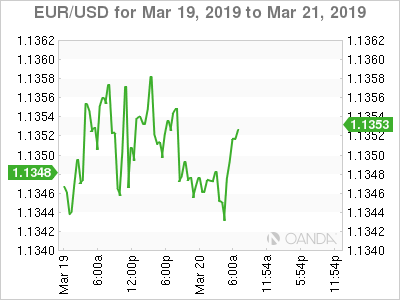 The USD is little changed against G10 currency pairs as the markets focus remains on the upcoming Fed policy decision later today. Expectations are for accommodative Fed rhetoric given the recent soft U.S data.

Sterling (£1.3231) is little affected by the modest increase in U.K inflation headline print this morning (see below). The markets focus remains on Brexit and the EU Council meeting on Thursday and Friday.

PM Theresa May is supposedly asking for a three-month Article 50 extension. A longer delay would provide a bid for the pound. However, dealers have noted that the current environment suggested that “no-deal” risk could be back around the end of June. The pound is last down -0.3% at $1.3227. EUR/GBP rises +0.2% to €0.8577. 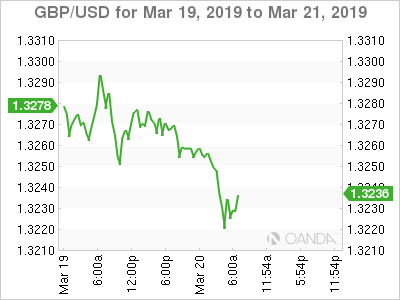 Data this morning shows that inflation in the U.K. ticked up in February, fed by higher prices for food, alcohol and video games.

According to the ONS, consumer prices rose +1.9% in the year through February, compared with an annual gain of +1.8% the previous 12 months.

Note: The BoE has signaled to hike up interest rates slowly three or more times in the next couple of years to keep inflation at its +2% annual target, provided that the U.K’s exit from the EU goes smoothly.

Also, the ONS said house prices in London fell -1.6% on year in January, the seventh consecutive month of declines. 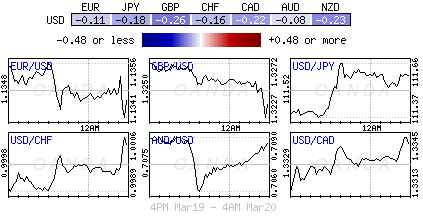