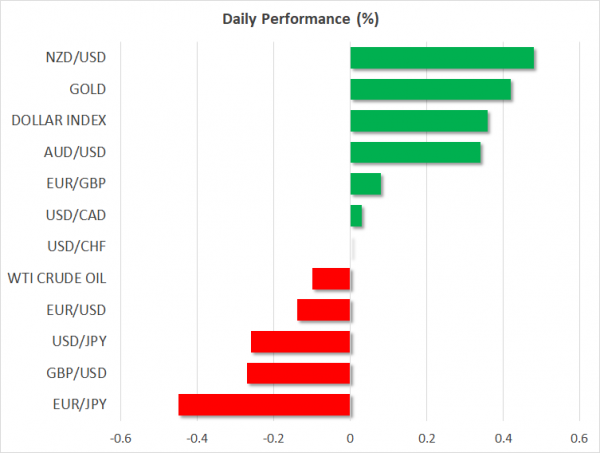 The Fed meeting wasn’t short of surprises. There was no change in policy, as expected, but the officials revised down their rate projections in the famous ‘dot plot’ quite significantly, to the point that they no longer project any rate increases in 2019, and just one in 2020. This was quite a pivot, considering that the previous ‘dots’ back in December still pointed to two rate hikes for this year. Policymakers also confirmed that the balance sheet reduction will be halted in September.

In the markets, the result was a plunge in the dollar, which fell in lockstep with US Treasury yields. Judging by the magnitude of the reaction, several investors were likely caught off guard by the Fed’s overly dovish signals, igniting a major repricing in the futures market, where the implied probability for a rate cut by December soared further. The message was that the Fed is unlikely to raise rates any more and is comfortable staying on hold as far as the eye can see – which traders interpreted as giving the ‘green light’ for rate cuts before long, should the economy falter.

US stock indices got a lift by the Fed’s cautious tone as financial conditions loosened, but were unable to hold onto their gains and actually closed in the red, with some remarks by Trump that he may keep tariffs on China for ‘a long time’ likely tempering sentiment.

The dollar wasn’t the worst performer in the session though, as the British pound fell even more severely, following headlines that PM May asked the EU for a short Brexit extension until late June. However, reports suggest the EU isn’t comfortable with that, and prefers either a shorter extension until late-May, or a much longer one of nearly 2 years. The risk is that if the UK gets a short delay, but PM May still can’t convince Parliament to approve her deal, then the odds of a no-deal Brexit could soar as another delay after June may be impossible if the UK doesn’t participate in the upcoming EU elections.

Today will mark another hectic session for sterling, as the schedule includes both an EU summit where the leaders will respond to May’s extension request, and a Bank of England (BoE) policy decision at 12:00 GMT. On the latter, no action is expected and admittedly, the Bank has its hands tied by Brexit uncertainties. Growth has clearly slowed but policymakers have been unwilling to adopt a more dovish tone, reasoning that an ‘orderly’ Brexit outcome can dispel much of the uncertainty by itself and hence kickstart growth without the BoE’s intervention. Given that Brexit remains in limbo, the Bank is unlikely to provide any strong signals today, but if there is any change in tone, it may be towards a more cautious-sounding bias.

UK retail sales for February will be released a few hours ahead of the policy decision.

The Swiss National Bank (SNB) kept its policy rates unchanged at the lowest level globally earlier today, in line with expectations. The Bank revised down its economic forecasts, reiterated that the franc remains ‘highly valued’, and that it will continue to intervene in the FX market to weaken it, if needed. Given the absence of any fresh signals, there was no major reaction in the safe-haven currency, which will likely be driven mainly by shifts in risk appetite going forward. 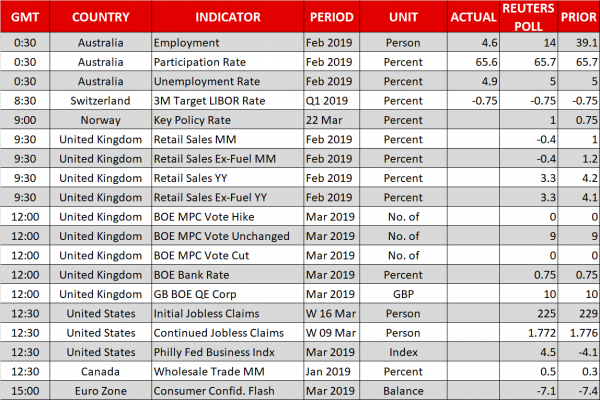 BoE Saunders: Safer to err on the side of easing somewhat too much

Fed: Economic activity declines in all districts, falling sharply in most