Friday March 22: Five things the markets are talking about

Global equities are trading mixed after the European Union agreed Thursday to a short Brexit delay. Investors are also weighing up further signs of a sluggish global economy as a plethora of G7 central banks reassess normalizing their monetary policies. U.S treasury yields have fallen back to a 12-month low, while the 10-year German Bund is flirting with negative territory.

In FX, sterling (£1.3103) remains very volatile as EU leaders have moved to stop a “chaotic no-deal Brexit” from happening next week by handing PM Theresa May an extra fortnight unconditional extension. The U.K must decide by April 12 what it will do next. They can either decide whether to hold European Parliament elections or leave the bloc on May 7, with or without a divorce deal with Brussels.

Elsewhere, the EUR (€1.1289) has dropped to a one-week low, after weak French, German and Eurozone purchasing managers’ surveys prints for March this morning.

In Japan, the Nikkei closed out the week little changed as chip-related stocks offset weakness in financial stocks. The Nikkei share average closed up +0.1%. The index rose +0.8% for the week, while the broader Topix rose +0.2% overnight.

Down-under, Aussie stocks rallied on Friday, led by financial and healthcare stocks as the market mirrored Wall Street after strong U.S economic data eased worries about a slowing economy. The S&P/ASX 200 index climbed +0.45%. The benchmark gained +0.3% on the week. In S. Korea, the Kospi index ended flat overnight on heavy profit taking. For the week, the index gained +0.5%.

In China, stocks closed out almost flat ahead of a new round of Sino-U.S trade talks next week (Mar 28-29), but posted weekly gains of about +2.5% on expectations of more policy measures to spur domestic growth. The blue-chip CSI300 index fell -0.1%, while the Shanghai Composite Index was flat. It was a similar story in Hong Kong as stocks closed the week unchanged. 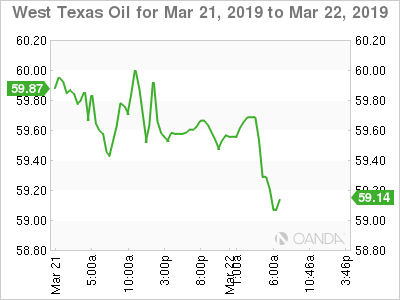 Oil hovers just shy of this year’s high, supported by ongoing supply cuts led by OPEC+ and by U.S sanctions on Iran and Venezuela. However, market worries about an economic slowdown is capping crude prices from rallying further.

Market consensus believes that OPEC is likely to extend its current supply cut deal for the duration of 2019 when they next meet in Vienna in June. Russia has been a reluctant partner in the supply cuts but is expected to opt to preserve the deal and retain a leadership role within the group that accounts for +45 % of total global oil output.

Support for the ‘black stuff’ has also come from U.S sanctions against OPEC-members Iran and Venezuela.

Note: Iranian crude oil shipments have averaged just over +1M bpd this month, down from +1.3M bpd in February, while in Venezuela, production has plummeted from +3M bpd in 2000 to +1M bpd in 2019.

Ahead of the U.S open, gold has extended its losses, moving further away from its three-week high print from yesterday, as appetite for some risk improved on upbeat U.S economic data. The ‘yellow’ metal remains on course for a third consecutive weekly gain. 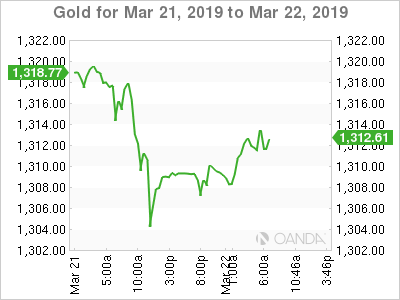 The German 10-year Bund yield turned temporarily negative this morning for the first time in three-years (October 2016), after poor manufacturing data (see below) fuelled concerns about slowing growth in the eurozone’s largest economy.

Elsewhere, the yield on 10-year Treasuries fell -1 bps to +2.53%, while in Japan the 10-year JGB yield dipped -3 bps to -0.069% on the biggest pullback in three-months after disappointing data overnight. 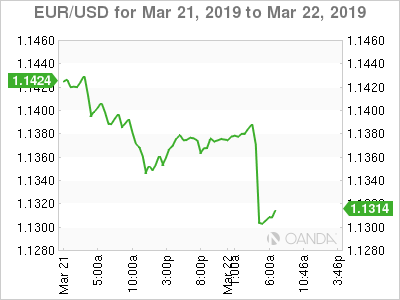 Weaker EU PMI data this morning – French, German and Eurozone all in contraction – has encouraged risk aversion flows. The EUR has declined over -0.63% outright ahead of the U.S open to probe back below the psychological €1.13 to a one-week low of €1.1289.

GBP/USD continues its volatile Brexit ways. The pound saw its initial gains eroded back to test below £1.31, where it has found some support after EU stepped up to avoid a hard Brexit from occurring next week and gave the U.K an extra two week of an ‘unconditional extension’ now set at Apr 12. If the U.K parliament agrees on PM May’s deal, the U.K. will leave the EU on May 22. If it doesn’t, the U.K. will either ask for a longer Brexit extension or crash out without a deal on April 12, the new deadline for Brexit. 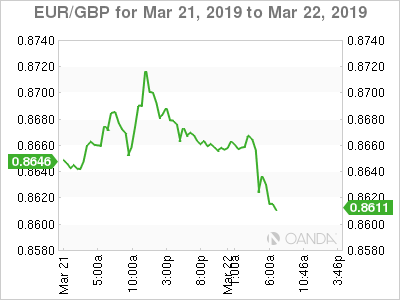 Its German manufacturing PMI fell to 44.7 from 47.6 in February, which marks the lowest level in over six-and-a-half years. The index has now fallen in 14 of the past 15 months.

The latest set of national and eurozone purchasing managers’ data should certainly add to downside risks for the EU’s economy and increase further pressure on the ECB. 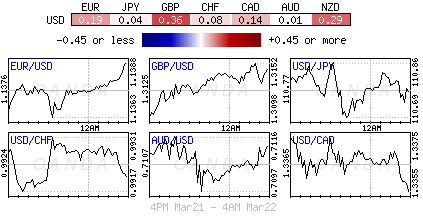