Stock indices struggle to stay on highs, while the forex market gives a sign to the possible downward reversal.

Key US indices, S&P500 and Nasdaq, are declining within 0.2% after touching the historical highs area. Strong corporate earnings in the first quarter had previously supported the growth of the stocks, but now the attention of market participants could switch to future prospects. The slowdown in China and Europe, as well as the American economy inhibition, can increase the market alertness. From the technical analysis, it is worth noting that the relative strength index has returned from the overbought area, which increases the risk of a corrective pullback in the coming days with possible targets at 2880 on SPX. 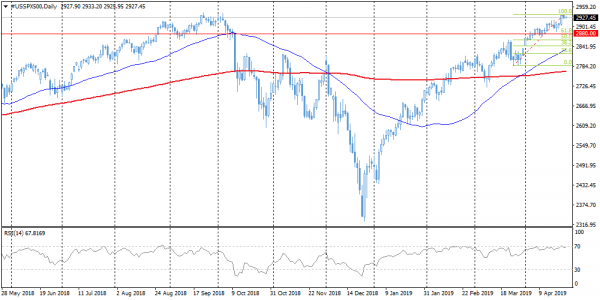 The single currency declined by 0.8% at some point during Wednesday. Since November, EURUSD received support on downturns to 1.1200, yesterday the pair could not get it, and breaking through an important level of support strengthened the EUR sale. Within the downtrend, the impulse to decline can strengthen in the area of 1.1100. Among the important news that could affect the current impulse of strengthening the dollar, traders should pay attention to the U.S. durable goods orders release. 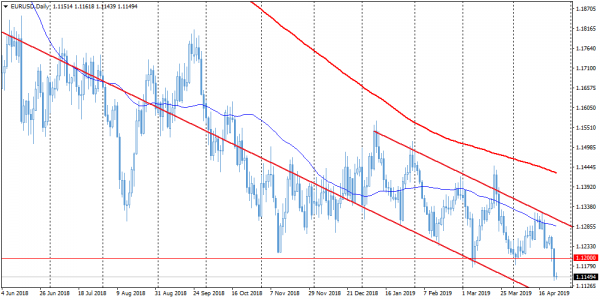 The British pound declines against the dollar for seven of the last eight trading sessions. The decline under MA (200) increased the pressure on GBPUSD, sending it to two-month lows at 1.2880. The cautious tone of world markets contributes to pressure on the British currency. Among major support levels traders should pay attention to the levels near 1.2800, where the pair received support in February. 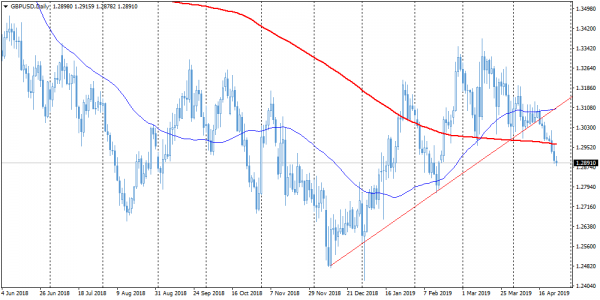 Bad luck pursued the Aussie. The Australian dollar failed to grow above MA (200) at 0.7200, declined below the uptrend support level at 0.7150 and under MA (50) at 0.7100 at the beginning of the week. Moreover, yesterday AUDUSD fell under serious pressure on disappointment due to an unexpectedly sharp slowdown in inflation. As a result, AUDUSD is testing the level of 0.7000 – an important milestone below which the pair tumbled over the past 15 years only during periods of rapid cooling of global growth. 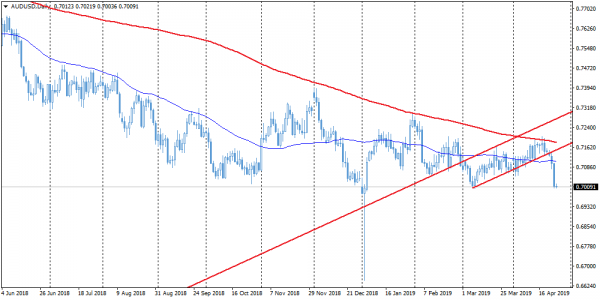