USD steadied yesterday, as upbeat US financial releases supported it. It would be indicative that the USD Index reached an almost two year high yesterday, as well as the USD against EUR. US financial releases showed that orders for capital goods have increased the most in 8 months and if combined with the recent favorable retail sales growth rates, fears of a possible sharp slowdown in the US economy seem to ease. Analysts point out that the difference in economic fundamentals, is a key driver for currencies, as the Fed along with other central banks have a more dovish stance in place now. We expect the market’s focus to be on the US GDP release today, which could provide further clues as for the USD’s direction and despite some analyst’s optimism, we maintain some reservations about the outcome. EUR/USD dropped yesterday and tested the 1.1125 (S1) support line without successfully breaking it. We could see the pair maintain a sideways movement today, yet it may prove to be quite sensitive to the US GDP release during the American session and we wouldn’t be surprised to see some bullish tendencies. Please note that the pair finds its self at the lowest position June 2017. Also please note that the RSI indicator in the 4 hour chart remains below the reading of 30implying a rather overcrowded short position. Should the pair be under the market’s selling interest once again, we could see it breaking the 1.1125 (S1) support line and aim for the 1.1075 (S2) support barrier. Should the market favor the pair’s long positions on the other hand, we could see the pair aiming if not breaking the 1.1175 (R1) and should that be breached, we could see it aiming for the 1.1220 (R2) resistance level.

Oil prices drop yesterday and during today’s Asian session as hopes for extended output levels by OPEC rose. Despite the drop analysts point out that the oil market remains tight amid supply disruptions and rising geopolitical concerns. It should be noted that the US is expected to mount the pressure on Saudi Arabia to lift its production to cover for any supply gap created by the sanctions on Iranian oil imports. Never the less, Turkey, India and China may continue to import Iranian oil and despite US efforts to drive Iranian exports to zero, we may see some Iranian oil continuing to slip out of Persia. Analysts seem to continue to have faith in the bulls for the oil market as they consider that the tight markets will ultimately push prices up. WTI prices dropped yesterday, breaking the 65.30 (R1) support line (now turned to resistance) and is aiming for the upward trendline incepted since the 26th of December 2018. Should the price action clearly break the prementioned upward trendline, we would switch our bullish bias for a sideways outlook of the commodity’s direction. Should the bulls maintain control of WTI’s price action, we could see it breaking the 65.30 (R1) resistance line and aim for the 66.50 (R2) resistance barrier. Should on the other hand, the bars take over we could see WTI prices dropping, breaking the prementioned trendline, the 63.80 (S1) support line and aim for lower grounds.

Today during the American session we get the US preliminary GDP growth rate for Q1 as well as the final reading of the University of Michigan Consumer Sentiment indicator for April. Also later we get the Baker Hughes oil rig count for the past week. On Monday, no major financial releases are to be expected during the Asian session, yet traders should be on their guard, as the Japanese markets will be closed for an extended holiday period and thin trading risks, will be present. 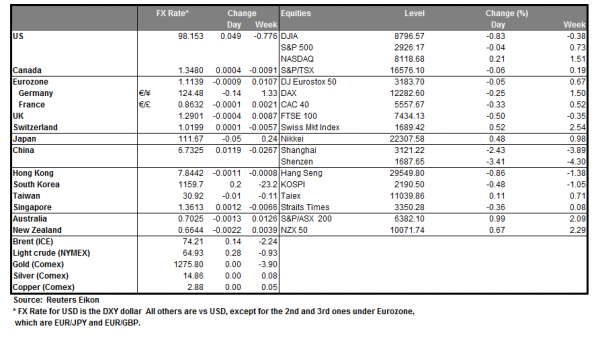 Is Crude Oil Breaking Out Of Its Range?