Investor attention has turned back to trade, as the US considers whether to launch another round of tariffs on China early on Friday (04:00 GMT). If tariffs are indeed increased, that would probably send stock markets plunging as investors brace for China’s retaliation, or worse yet for a breakdown in the talks. In the bigger picture though, the most likely endgame is still that a deal will ultimately be reached.

After months of optimistic comments from both the US and China that a trade deal is just around the corner, that narrative was turned on its head earlier this week, after President Trump threatened to impose more tariffs by Friday. It seems China attempted to renegotiate some points at the ‘last minute’, infuriating the US administration, which saw that as backpedaling on earlier promises. Trump therefore decided to ramp up the pressure, reverting back to his original methods of ‘raising the stakes’ to generate negotiating leverage and force concessions.

The threat was that the existing tariffs on $200bn worth of Chinese goods will be raised to 25% on Friday, from 10% currently, and that new levies will be imposed on the remaining $325bn of products from China ‘shortly’.

Naturally, markets were caught off guard and reacted sharply, with stocks in particular feeling most of the pain. Meanwhile, safe-haven assets – such as bonds and the Japanese yen – are back in high demand as investors seek shelter from the looming trade storm. 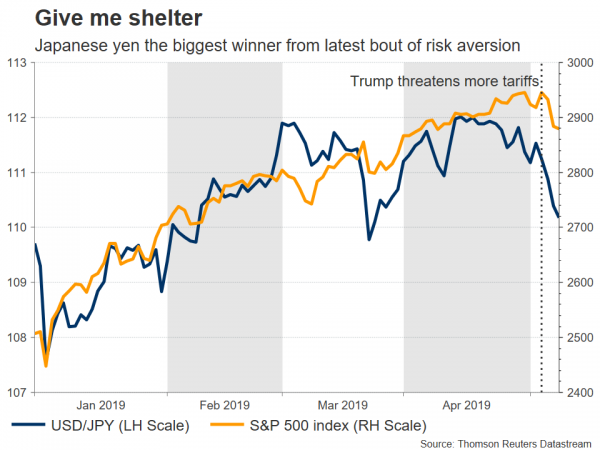 Commodity currencies such as the Australian, New Zealand, and Canadian dollars have held up reasonably well so far, but that could change quickly if tensions begin to escalate.

All hope is not lost yet, though. The Chinese Vice Premier, Liu He, is currently in Washington for more talks in hopes of averting further tariffs and salvaging the overall deal. Alas, that may be easier said than done.

China doesn’t want to lose face domestically by completely caving to US demands, nor does it want to negotiate with ‘a gun to its head’. This implies that while Beijing could make some concessions, those will likely fall short of the ‘unconditional surrender’ the US is looking for. In other words, unless China is truly willing to lose face, the existing tariffs could very well be raised early on Friday.

Not all tariffs are created equal

Even if the existing tariffs on $200bn of goods are raised this week, introducing new levies on all remaining imports from China would be a different beast. Many of those items escaped the original tariff list for good reason, with several being core consumer products like phones, clothing, and computers. 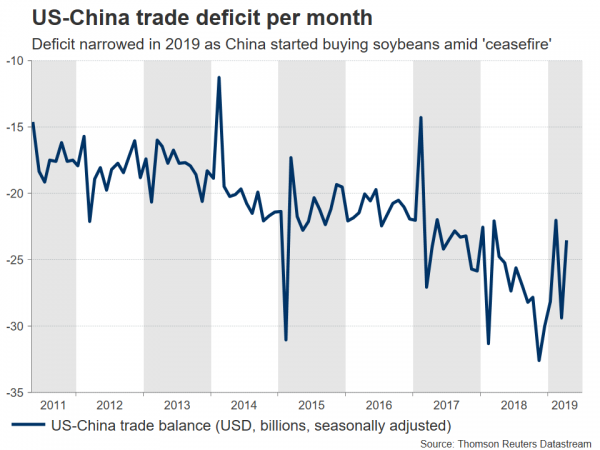 The point is that taxing such goods may prove politically problematic as it could enrage consumers ahead of the 2020 election race. Public opinion could swing quickly if Apple products become more expensive overnight for example.

Therefore, while Trump may be prepared to escalate matters this week, he may stop short of pulling the trigger on new tariffs, not only due to fear that his approval rating could take a major hit but also to avoid sending US stock markets crashing down.

Make no mistake, what happens overnight will probably dictate market sentiment in the coming days or weeks. Either the two sides reach common ground and an increase in tariffs is averted, sending the signal that a deal is still within grasp, or levies are raised and uncertainty skyrockets as investors start to brace for China’s retaliation – or worse yet for a complete breakdown in the talks. 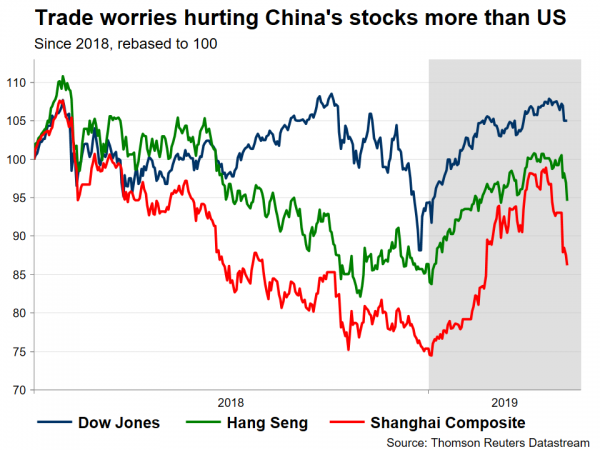 In the scenario of escalation, which on the margin seems more likely, stock markets would probably plummet alongside commodity currencies. The main beneficiary may be the Japanese yen as investors flock to safe havens, and perhaps to a lesser extent the dollar. On the flipside, if the tariff increase is avoided then equities could experience a major relief rally as the yen retreats.

But endgame still a deal

In the big picture, a deal still seems like the most likely outcome. Both sides have too much to lose by playing this game for much longer. Trump wants to score a ‘victory’ and wrap this up before the 2020 election race, while also preventing any real pain for US stock markets, which he considers a barometer for his success.

China wants to avoid any more damage to its economy, and while one could argue that can be negated with even more stimulus, remember that massive easing also carries considerable debt and financial stability risks – something Chinese policymakers are acutely aware of.

The bottom line is that regardless of what happens this week, the endgame is still an agreement. That being said, uncertainty has clearly returned and things could get worse before they get better from here.

Taking a technical look at dollar/yen, support to further declines – for example in case tariffs are raised overnight – may be found near 108.50, the January 31 low. Even lower, attention would shift to the 107.75 area.

On the other hand, if trade tensions subside, the pair could reverse higher. Initial resistance to advances may come around 110.85, a zone defined by the April 10 trough, with even steeper advances aiming for the April high of 112.40.