The Canadian dollar rose 0.16 percent after a long weekend. The loonie benefited from rising risk appetite and given that the US reached an agreement with Canada and Mexico to cancel steel and aluminum tariffs the currency was exempt from trade war tensions. 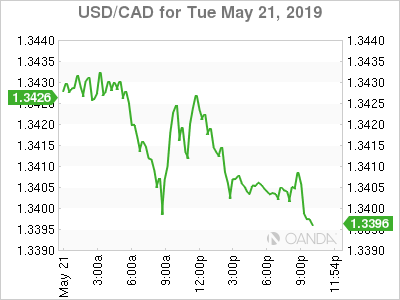 The Bank of Canada has kept rates unchanged in 2019 and given how economic data has been mixed there is little expectation of a rate move in either direction this year. The central bank joined the dovish choir, despite impressive job gains as trade headwinds could still pressure the economy.

Next week’s economic calendar in Canada will be low on events. Retail sales data on Wednesday, May 22 is the most relevant, with a 0.8 percent gain expected. Canadian data has been mixed with the employment report giving a huge boost to the loonie that will probably not be repeated in the short term.

The US dollar is higher against most major pairs on Tuesday. The Canadian dollar was the outlier as it gained 0.16 percent versus the greenback.

Oil prices were mixed on Tuesday. Brent gained 0.22 percent and West Texas Intermediate lost 0.21 percent. Supply disruptions continue to support current price levels. Geopolitical, weather and operational factors have reduced crude supply levels. The OPEC+ agreement has been the major factor and with the upcoming June end of the deal there is uncertainty if an extension is coming. 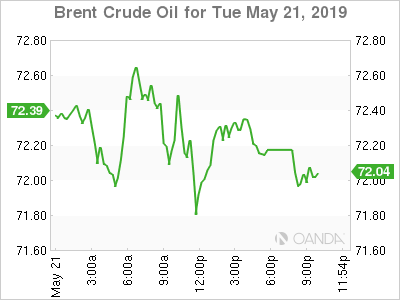 Russia has sent mixed signals and the effectiveness of a production output cut would be limited if it does not rejoin the group. Saudi Arabia has carried a heavy load to soak up excess supply and will steward the group form committing the same mistakes that lead to a free fall in crude prices.

The US is impacting prices in two ways. Sanctions against Iran and Venezuela for political reasons have boosted prices as it reduced supply. US-China trade disputes have a negative effect on global growth forecast reducing energy demand going forward. 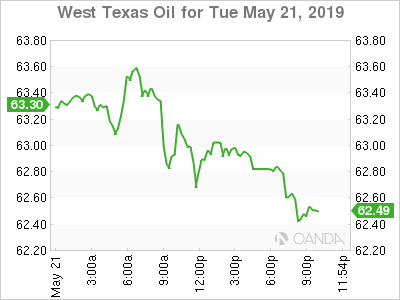 Crude traded flat on Tuesday as both limited supply and downgrades in energy demand cancelled each other out as lack of details are not giving traders enough information to commit to a position. US-China trade negotiations are expected to restart soon, but no firm date is on the table.

Gold fell 0.24 percent on Tuesday. The strength of the US dollar and a rebound in risk appetite hit the yellow metal which touched a two-week low. As investors abandon their safe havens in search for higher yields the metal is getting sold. Given the decision by the Trump administration the decision to focus its attention on the US-China trade dispute, by delaying or reaching an agreement with other partners, has put the greenback as the go-to safe haven if uncertainty rises. 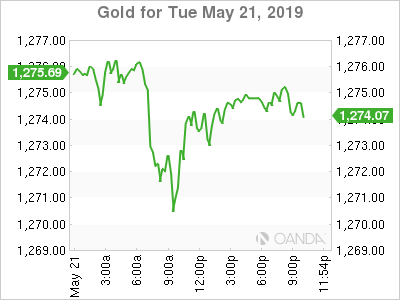 US data and Fed speakers have been mixed leaving the U.S. Federal Reserve to keep on pause and await the data for signs of improvement. The Fed minutes to be released will bring details on how dovish Fed members are, but from the statement we know that a rate hike is unlikely to happen in 2019. A rate cut in the other hand has been rising in probability as disappointing data and geopolitical anxiety could be signalling lower growth than expected.

The temporary exceptions announced by US officials on Huawei triggered a rebound in risk appetite and benefited directly the tech sector. The US-China trade war continues to have a negative impact on markets as uncertainty on a deal between the two largest economies does not appear to be close.

The minutes from the April/May FOMC will be released on Wednesday with investors keen to get some clues on the internal debates at the Fed. The US central bank changed course at the beginning of the year and has shelved its plans to lift interest rates in 2019. The market continues to price in a probable rate cut, it the economy does not ramp up this year. The CME FedWatch tool shows only a 34.3 percent probability that the Fed funds rate will remain at the current level by December. 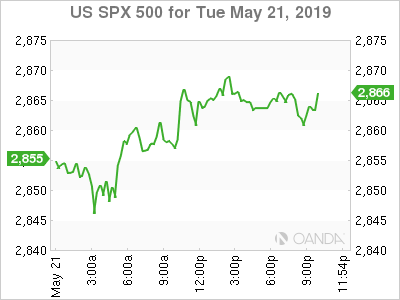 The Fed has been mixed as it remains hawkish on the economy, but dovish on headwinds and its impact on growth. Fed members have talked to both sides of the equation, with the majority subscribing to the center. Minnesota’s Neil Kashkari has been the most outspoken dove, with his comments about rate hikes “were not called for” as inflation remains low.

The Fed hiked 4 times in 2019 and that commitment to rate normalization was one of the reasons that triggered a fall in the stock market in December. Equities have rebounded, but if the Fed remains on the sidelines for the rest of the year, investors will not be concerned with tighter monetary policy.