Crude oil is back in green, it is trading higher by 1.19 percent after the price plunged nearly 5.7 yesterday. Clearly, bargain hunters are back in town. However, it is still set to record the worst week of the year (as shown in the chart below) and this is due to the increase in trade war tensions between the US and China. Investors aren’t concerned that the trade war is going to leave a major dent on the oil demand, after all we are talking about the two biggest economies of the world. If the business cycle starts to slowdown here, it is going to have huge impact on oil demand and the fact is that the spill over effects of the business cycle in these countries also has an impact around the world.

The recent strength in the oil price was mainly due to the concerns over the supply because Donald Trump decided to pick a figtht with the Republic of Iran. As and if the Middle East isn’t already sensitive enough. Sanctions on Iran trigged the huge surge in the oil price. There is no doubt in saying that investors have become more sensitive to Donald Trump’ tweets. They have large implications across different asserts. The oil price also got the tail wind because of the sanctions on Venezuela and the disruption in oil production from Russia to Nigeria. For now, these disrutpions in oil supply have failed to triumph pesimission in the market.

So, the surge in the oil price which we are experiencing tody may not be able to last longer if the trade issues continue to escalate. Yes, there is no harm in saying that the oil industry have been resilient to the trade war issues for long time because it is not that the trade war started only this week but the reason that investors didn’t pay too much attention to this was mainly due to the concerns over the supply diruptions and they really thought this trade war will not last that long. Donald Trump has softened some of his stance today towards China but we are no where close to where we need to be.

In terms of technical analysis, during the past 2 days, the price has fallen more than 8%. This sell off made the price to break out of its upward channel towards the downside. The WTI price has been trading in this upward channel for most of the year. The downward channel’s strength is in focus for now and it is likely that the price may continue to trade within this channel unless the momentum really picks up and pushs the price out of this downward channel. The support is near 55.80 and a break of this would open the door towards the next level of 53.20. The resistance stands at 63.96. 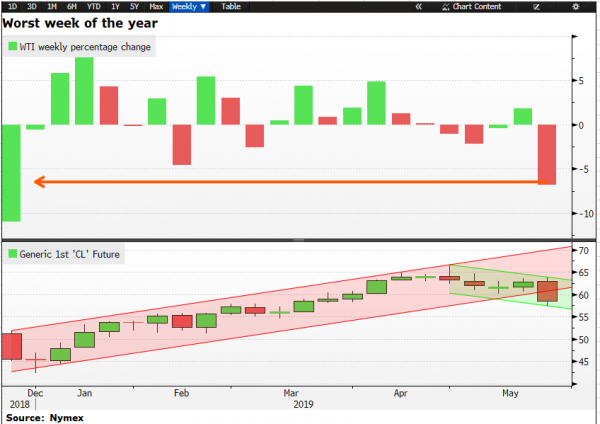 The shinning metal has continued its move to the downside after a brief rally yesterday which triggered due to the soft economic numbers out of the US. The US initial jobs data fell short of expectations, the actual number was 211K agains the forecast of 215K. The bad news didn’t stop there, the Manufacturing PMI and new homes Sales number were soft as well. This all helped the gold price to move higher but the momentum wasn’t strong enough to push the price above the critical level of 1300. One important factor to note
is that the Exchange-traded funds have added 7,759 troy ounces of gold during the last trading session. SPDR Gold Shares, the biggest gold ETF by State Street also confirmed that the institutions are still maintaining their holdings and we have not seen any change durint the last session.

The safe haven, gold has reacted to trade war development but it has not shown any extreme reactions, meaning we have not seen any explicit moves to the upside in the gold price on the back of the trade war between the US and China. It looks like gold traders do not see that as a major threat at all, which could be a very expensive mistake.