Prime Minister Theresa May said on Friday she would step down on June 7, succumbing to calls in her governing Conservative Party to make way for a new leader to try to break an impasse over Britain’s departure from the European Union.

“It is now clear to me that it is in the best interests of the country for a new prime minister to lead that effort. So I am today announcing that I will resign as leader of the Conservative and Unionist Party on Friday the 7th of June,” May said.

Sterling’s record losing streak combined with the growing risks that Brexit will see a hard exit, is making fund managers abandon long-term ‘bullish’ bets. Just a few months ago, the base case was that Brexit would be delivered by PM May and that it would be a soft exit.

However, if we do see Boris Johnson, the current oddsmaker favorite, become Theresa May’s successor, we could see the ‘hardest’ Brexit occur. The pound (£1.2645), which is currently atop of its four-month lows, could see further pressure to target the psychological £1.2000 level and eventually the 2016 lows. A no-deal Brexit and a general election risks are likely to keep the pound under pressure.

But a weaker than expected showing for the Brexit party in the EU elections could potentially provide some relief for sterling, particularly if the Liberal Democrats perform strongly. A new Tory leader that is less of a Brexiteer than the likes of Boris Johnson could also see a modest bounce in the pair.

Support for Nigel Farage’s “no-deal” supporting party is at +37%, according to a recent survey, compared to +19% for the pro-remain Liberal Democrats and just +7% for PM May’s Conservatives. 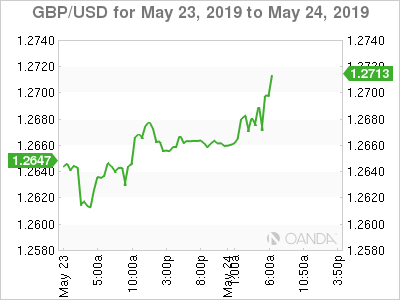 GBP/USD Pulls Back After Briefly Hitting Resistance At 1.2424