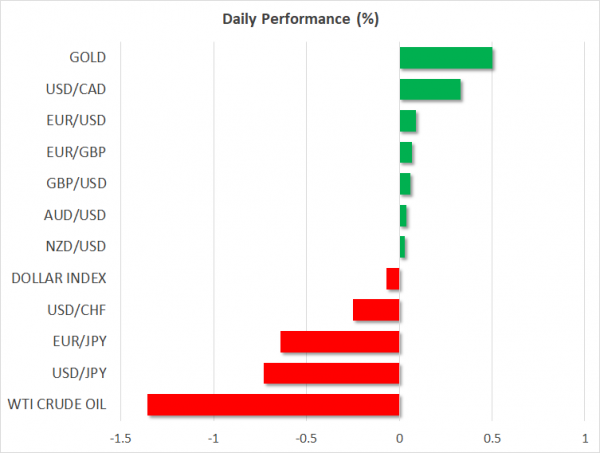 Following a relatively calm session yesterday, risk aversion returned with a vengeance early on Friday, after the US President announced new tariffs overnight. All goods coming to the US from Mexico after June 10 will be subject to a 5% tariff, which will increase to 25% by October, “until such time as illegal migrants coming through Mexico, and into our Country, STOP”, Trump said on Twitter.

Markets reacted sharply, as the news caught everyone off guard, with investors piling into safe-haven assets like the Japanese yen and gold. On the opposite side of the ‘risk’ spectrum, futures tracking the major US stock indices are pointing to a lower open today, while the Mexican peso is getting pummeled. The loonie is also suffering, as investors bet that this escalation will effectively derail the new NAFTA agreement and thus harm Canada in the process.

This is even bigger than it looks at first glance. So far, Trump tried to fight trade battles on one front at a time, while also staying mindful of the potential damage to stock markets. Both of these seem to have changed, with the President now placing more emphasis on pleasing his voting base as the 2020 election race draws nearer. Overall, traders still seem to be underappreciating the disruption these skirmishes can cause both to business supply chains and consumption. As such, risk aversion could remain the dominant theme in the near term, with any retaliation from Mexico or China likely to unleash more havoc in markets.

The greenback is lower today against a basket of six major currencies, albeit only slightly, as the darkening trade picture is fueling bets that the Fed will intervene to support the economy by easing monetary policy. A full rate cut by December is fully priced in and the probability for a second one soared has to ~80%, from roughly ~50% earlier, according to pricing derived from the Fed fund futures.

Some cautious remarks by Fed Vice Chair Clarida yesterday that cuts are possible if the outlook deteriorates may have contributed as well, alongside a disappointing Chinese manufacturing PMI overnight. In the big picture, the weakness in the dollar has so far been almost negligible despite the sharp drop in long-term US interest rates, which once again highlights the lack of appeal in other major currencies. In this sense, it’s worth noting that German bund yields have also fallen to almost record low levels today, taking some shine off the euro as well.

Today, the core PCE price index is due, together with personal income and consumption, all for April. Projections point to an unchanged yearly PCE rate of 1.6%, but the risks around that forecast may be tilted towards a disappointment.

Besides any developments in the trade saga and the US data, traders will also keep an eye out on Germany’s preliminary inflation numbers for May today, ahead of next week’s ECB meeting.

In Canada, GDP figures for Q1 are due, but given the overnight news, even a strong positive surprise may be unable to support the loonie for long. 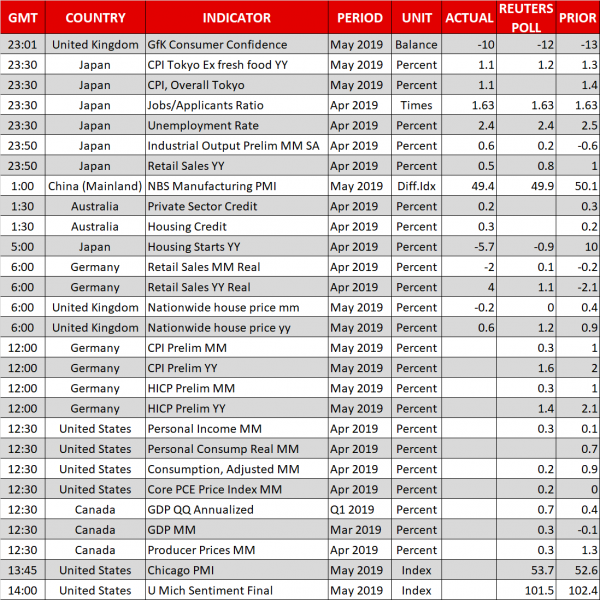