Asian equities were mostly lower on Wednesday morning as risk sentiment swung back to caution on persistent US-China trade tensions.

The fact that markets were relatively unfazed by President Donald Trump’s recent comment on how he’s personally “holding up the trade deal” with China suggests that a sense of fatigue over US-China trade narrative is starting to impact financial markets. With global trade developments dragging on with no solution in sight, there is a risk that investors are slowly becoming desensitized to Trump’s trade rhetoric. While the build up in risk appetite this month indicates that some remain cautiously optimistic over a breakthrough deal between the United States and China at the G20 summit later this month, investors should remain vigilant and be prepared for the unexpected.

It is worth noting that this is not the firsttime optimism has grown over a potential US-China deal, only for market players to be left empty-handedafter talks fall apart with no breakthrough achieved. Even if a Trump-Xi meeting becomes reality at the end of this month, there is still the risk of both sides agreeing to disagree – ultimately leading to the heightened trade tensions between the world’s two largest economies remaining a recurrent theme.

Dollar shivers ahead of US CPI

The Dollar is struggling to nurse the deep wounds inflicted from last Friday’s dismal US jobs report and this continues to be reflected in price action. Dollar bulls are clearly in trouble and may be kicked out of the scene today if the pending US inflation report points to a widening gap between the Fed’s golden two percent target and the actual readings. Anothersluggish CPI reading is likely to fuel speculation over the Federal Reserve cutting interest rates this year which may end up weakening the Dollar further. While the Dollar Index (DXY) may find some support from a depressed Euro and Pound in the near term, the medium to longer term outlook for the DXY favors further downside. In regards to the technical picture, the Dollar Index has scope to sink towards 95.90 if a daily close below 96.50 is achieved.

Gold was back in fashion this morning after hitting a one-week low in the previous session, as renewed concerns over US-China trade tensions supported the flight to safety. A softer Dollar also played a role in the metal’s appreciation with prices trading marginally above $1335 as of writing.

It is becoming increasingly clear that Gold remains shielded by speculation over the Fed cutting interest rates this year, global growth fears and persistent US-China trade tensions. Technical traders are likely to closely monitor how prices behave above the $1324 support level this week. Should this prove to be reliable support, the next key level of interest for Gold could be found around $1347. A situation where bulls are unable to keep control above $1324 is likely to open a path back towards the psychological $1300 level. 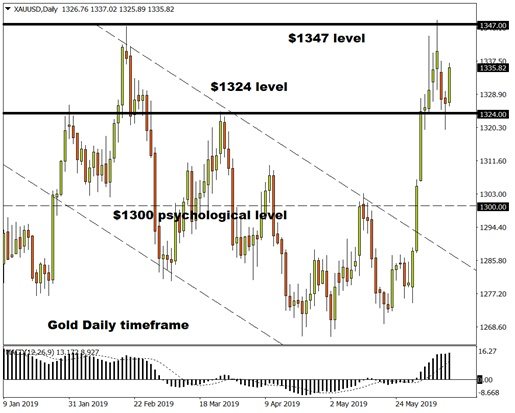