The USD weakened yesterday and during today’s Asian session, as the Fed remained on hold, yet signaled its readiness to cut rates, maintaining a dovish stance. After the decision, the market seems to have priced in with certainty, that the bank will cut rates by 25 basis points (bp) in the July meeting and prices in another cut of 25 bp in the September meeting, by 85%, as per Feds Funds Futures. As anticipated, the bank removed the word “patient” from its accompanying statement, signaling its readiness to act. It should be noted, that despite the dot plot not altering the member’s expectations for the interest rate level, there seems to be a shift in towards a rate cut. Fed Chair Powell, in his press conference expressed a willingness to see more solid data before the bank actually cuts rates. Analysts tend note that the bank may have shifted dovishly beyond the market’s expectations and some even argue for a possible 50bp rate cut in July. We see the case for the bank to be closely watching any developments in the US-Sino relationships, especially in the G20 meeting, as well as any financial data, especially about inflation. We could see the USD continuing to weaken in the aftermath of the bank’s decision. EUR/USD rallied after the decision, breaking consecutively the 1.1220 (S2) and the 1.1260 (S1) resistance lines, now turned to support. We maintain a bullish outlook for the pair’s direction, as the downward trendline incepted since the 12th of June, has been broken. Please note that the pair’s RSI indicator in the 4 hour chart is above the reading of 70, implying a rather overcrowded long position for the pair, hence we could see the pair start to slowly stabilising. Should the bulls maintain control over the pair’s direction, we could see it aiming if not breaking the 1.1300 (R1) resistance line. Should the bears take over, we could see the pair breaking the 1.1260 (S1) support line and aim for the 1.1220 (S2) support level.

BoJ’s interest rate decision was released during today’s Asian session and more or less did not provide anything new or more dovish comments than expected. JPY appreciated somewhat upon the release against the USD in the minutes following the release, yet relented most of the gains later on. The bank maintained its current rate level as expected, at -0.10% and left the forward guidance unchanged as it stated that it would keep current extremely low rates through spring 2020. It also stated that Japan’s economy is expanding moderately as a trend although exports and output are affected by overseas slowdown. We could see JPY remaining largely unaffected by the decision as nothing actually new is provided, yet could also be compared favorably against the Fed’s interest rate decision, despite BoJ’s dovishness. USD/JPY dropped yesterday, breaking the 107.90 (R1) support line, now turned to resistance. As the pair has broken the lower boundary of its past sideways movement, we switch our sideways movement expectations for a bearish bias. It should be noted, that the pair’s RSI indicator in the 4-hour chart is just below the reading of 30, implying the pair may be oversold and a somewhat current stabilization of the pair may be in the works. Should the pair remain under the selling interest of the market, we could see the pair breaking the 107.20 (S1) support line. Should the pair’s long positions be favored, we could see the pair breaking the 107.90 (R1) resistance line.

Today during the European session, we get from Norway, Norgesbank’s interest rate decision and from the UK BoE’s interest rate decision and the retail sales growth rates for May. In the American session we get from the US the Philly Fed Business Index for June and from the Eurozone the consumer confidence also for June. In tomorrow’s Asian session, we get Japan’s inflation rates for May. As for speakers, please note that ECB’s Coeure is scheduled to speak. 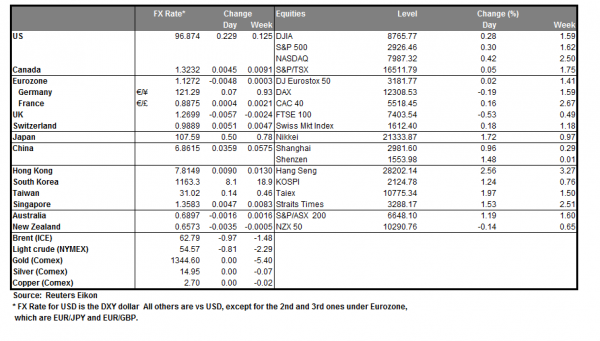